Some time ago, I was walking through the various stands set up by people peddling all kinds of stuff at a street festival the next town over. The town is known for honey and maple syrup, so there was a lot of that. There were also a lot of items you’d expect to find in a discount store, oddly enough, like hats and dresses and purses and wallets. Personally, I don’t get the point, although I can see it takes less effort than actually making something.

Also, I happened to see a guy advertising his live-edge products. This is a term I’ve seen a lot of recently, for whatever reason. Personally, I think “dead edge” is more appropriate, since what you get is the dead bark and other outer layers of the tree, still on the edge of the piece of wood, after it has been turned into a bookshelf or table or headboard or other firewood. And I know there are ways to treat that such that the bark does not end up flaking off all over the place, such as sinking it in 25 gallons of urethane or never touching it or actually pre-emptively cutting it off. All kidding aside, I don’t see the appeal. 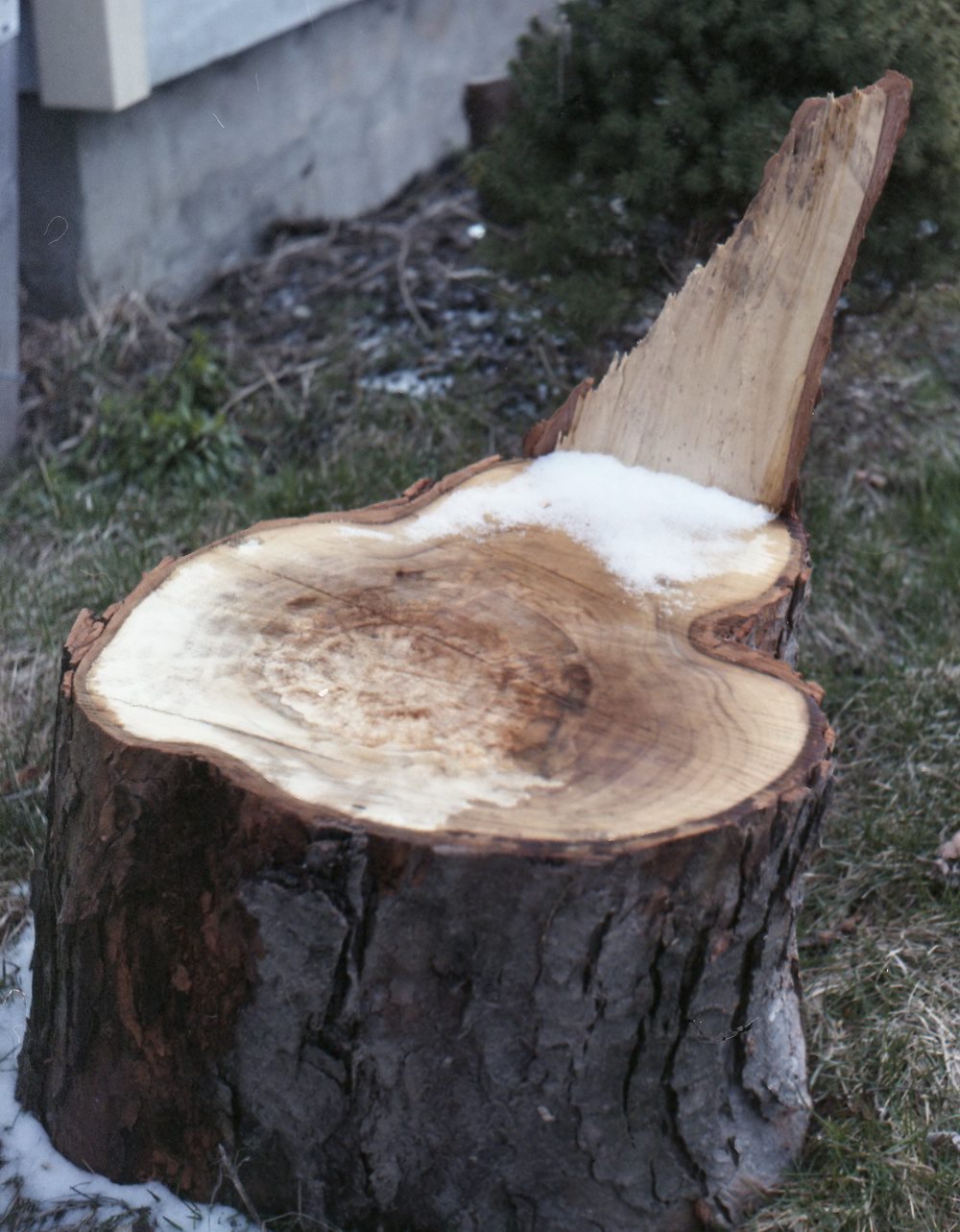 Above: This fine chair was produced when town workers cut up a large tree fell across my yard.

I was at big blue box building supply store and saw they too sell “live-edge” wood. They had a stack of 2-inch pine slabs. The price, however, was a bit absurd. This was rough-cut, untrimmed, 8/4 plain white pine stock. It should be cheap. I figured I’d go buy a new computer instead of a couple of those boards.

Pine’s no good for cutting boards. It’s plenty good for tables. Now, when I was a kid, I recall seeing many coffee tables that were topped by tree-slices, complete with the bark and possibly any vermin that had burrowed into it and were unlucky enough to still be inside when the wood was sealed. But that seemed a symptom of a different age, a time when people liked pastels and shag carpeting.

I get the feeling that people now want these bits of nature to supplement the acerbic nature of their featureless furnishings. No one’s actually looking at anything other than a phone anymore, so it shouldn’t matter. I think it might hurt a bit more barking your shin on the live-edge coffee table while reading the latest essential and unimportant highlights of the days of people who you never knew mattered to you.

Yes, it hurts. But it’s a live edge, so the wood hurts, too. Luckily, any damage done to the live-edge furniture is not actually noticeable, even if you look for it.

So, I was at John’s some time ago and noticed he had a veritable furniture store of live-edge chairs and benches and tables in a pile outside. Well, only a little creative rearrangement would be necessary to turn the woodpile into the dining-room set. Get a couple of cushions, make a couple of couches. Why not throw in some pallets for good measure?

If you can’t tell, I don’t think much of having bark on the furniture. I’d also rather not have twigs or leaves.

Oh, and what’s the moral of this story? Maybe just that people will think anything is great if you push it in their face enough. Or, how do you compete with the fact that stuff can be bought for much less than it would cost you to make? Or maybe it’s all about the fact that everyone believes they can do anything just as good as anyone else. That’s a good one. Skill and knowledge and the creativity involved in applying your ability and what you know to result in something well-made? Who cares about that? Just pile up some logs. We can pretend we’re camping.

In other news, the rain has not stopped here, and my basement would have flooded again except I put in a sump pump. (For those of you who don’t know, my basement flooded a few times. Most recently, last year and this year.) To read all about it, see the article.

Rain is good for the plants, trees included. So, more furniture.