View the plans for this project $10

This article is different from my usual. In it, I’ve used a lot more video than I have before. I believe that this can give a better understanding, since some things are better shown than explained. There are less photos and text than in my other articles, but I think that a bigger project like this quick release vise can really benefit from the detail you can only get from video.

I’ve taken the original ten videos that documented the build and condensed them down to one faster paced video that is fully narrated.

I’ve wanted to build a large side vise for a while. Making it so that it would be quick to adjust was the one design aspect I had been mulling over, to come up with a reliable and reasonably easy way to make it work. I also wanted to make it from commonly available parts, and as much as possible from wood. My intention is to eventually produce plans for this vise and make it easy to build for the average woodworker – no tricky cuts or hard to find hardware.
For me, the best way to work through the first basic ideas of a design are on paper:

I’ll doodle something roughly, more or less just giving my thoughts a visual representation. From there, I can further develop the concept in SketchUp.

To get started, I used a zipcut blade in my grinder to cut the nut in half:

This could be cut by other means: hacksaw, for example. I made the cut from point to point to have the flat spot (arrow) against the wood to make cutting out the notches that these sit in easier.

The jaws of the quick release mechanism are two pieces of hard maple cut to size:

These are machined for the threaded rod to pass through and to house the split nut. A simple dado cut, straight across for each half of the split nut.

At this point, it’s a good idea to modify the nut slightly by grinding the corners down a bit as shown in this picture:

The red areas. This will make the lead screw slide easier with the jaws open, but won’t affect the holding power.

Part 1 of the video series on the construction of this vise cover these first steps in the build:

The v-groove is large enough to easily clear the 1″ threaded rod as it passes through, but still provide good support for the nut. This part of the build is probably the trickiest, and it requires some fairly precise measurements and cuts.

Video 2 goes through this in detail:

The nuts are glued into the notches with slow set epoxy. This needs to be as strong as possible and slow set epoxy is the only adhesive I trust to do this. Filler blocks are cut to 60 degrees and glued in as well:

The excess is then trimmed off and sanded flush.

At this point, it’s a good idea to grind or file the upper and lower edges of the threads, so that they will clear the rod easier when the jaws are open:

This makes the adjustment smoother and does not have any impact on the clamping pressure.

While the epoxy was drying on the quick release jaws, I went to work on the end for the lead screw. It is made from maple, two pieces glued together to get a blank that’s 6″ long and 3″ square. I knocked the corners off on the table saw to get it ready to turn:

I turned it to a smooth cylinder and dressed it up with a bead.

Video 3 shows the turning of this part:

Video 4 shows how it was drilled out, glued and pinned to the lead screw:

Two more minor machining operations are done on the quick release jaws before they can be used: the ends (black arrow) are slightly rounded. This end goes against the fixed jaw of the vise and as they rotate to release the lead screw, they need to clear.
The other end, (red arrow) needs clearance as they open also, and are sanded down slightly, creating that “V” shaped gap: 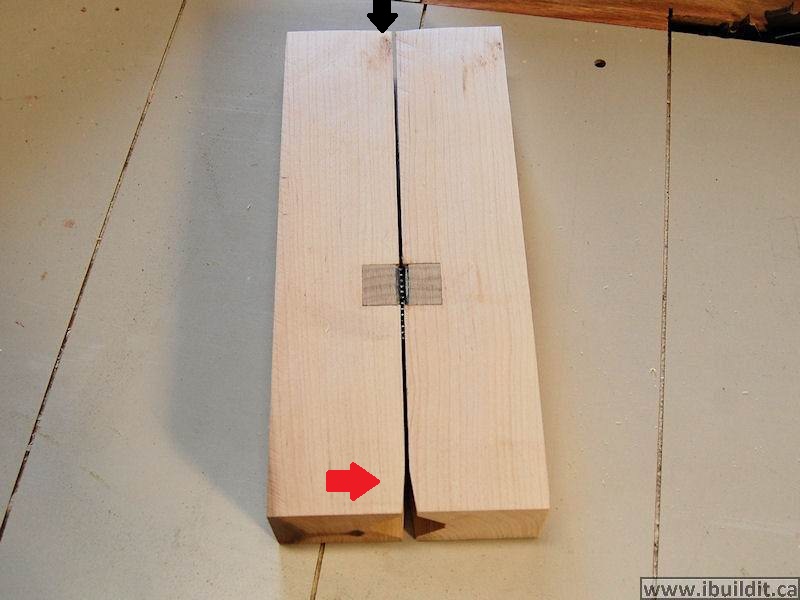 The main jaws of the vise are glued up from two smaller pieces (I didn’t have stock this wide) and are cut and planed smooth.
I’m using maple for this, but any hardwood will be fine.

They are then cut for replaceable jaw pads, and that operation is shown in video 5:

The quick release jaws are mated to the undercarriage and the pivot holes are drilled:

Details on how this was done are also shown in video 5.

Video 6 goes into more detail on the jaw assembly and hardware:

The quick release jaws are opened and closed with a lever that has pins in it:

These pins engage in tracks that are fastened to the sides of the quick release jaws. By pushing it forward, the jaws are opened.

A stop is made with a wood screw and two 1/4″ nuts stacked to limit how far the lever will swing:

I go over this in depth in video 7:

I decided to use 3/4″ steel pipe for the guide bars and use floor flanges to attach these to the moving jaw. This presented a problem: the flanges are very roughly cast, and not anywhere near a precision part. To compensate for this inaccuracy, I used polyurethane construction adhesive as a packing material between the jaw and the flanges. This is illustrated in video 8:

The lead screw assembly is then finished and added to the front jaw:

With the major parts fabricated, it was time to mount the vise on my workbench. I started by flipping the bench over, putting the vise where it will be and drilling through the underside for the 1/2″ pivot bolts. I then put the bench upright again and routed oval countersinks in the top:

These allow the bolts to move slightly, to compensate for the tops seasonal expansion / contraction.

The fixed jaw is screwed to the bench with seven 2-1/2″ screws. I thought that this would be better than using lag bolts, which was my first idea.

Here’s a good view of the quick release jaws. The semi-circular grooves are not needed – they are from previous attempts to make a mechanism to open and close the jaws.

The open / close lever pivots on a 3/8″ bolt, and double-nutted to the under carriage. The nuts are fairly tight, to give the lever some friction so it will stay in the closed position: 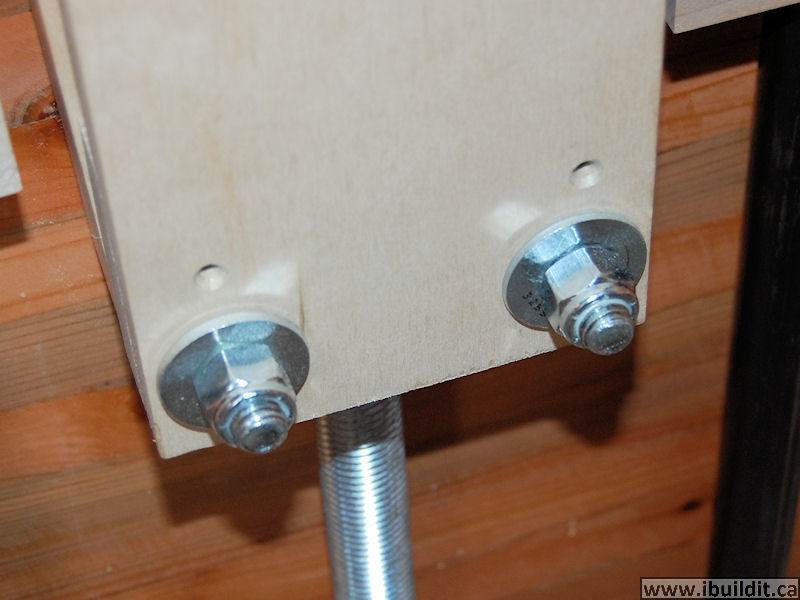 The 1/2″ pivot bolts get lock nuts. These are just snugged, to allow the top to expand and contract.
The details are shown in video 10:

Complete and ready for use.
At some point I will put some clear finish on the jaws, handle and lead screw head.

Finally, a demonstration of the quick release vise in action:

I’m quite pleased with the finished vise. It works very well – a definite asset and a worthy addition to my shop.