For most of the shop projects that I build, especially jigs and machines, I prefer to use Baltic birch plywood. The main reason is that it is a higher quality than the typical cabinet grade plywood, as far as structure goes. The core material is the same as the face veneer, birch through and through, where cabinet grade plywood often has a softer hardwood as the core, like poplar. Also, Baltic birch is made with more laminations of thinner veneer making it very strong in both directions and durable. It is a consistent thickness and can be counted on to start relatively flat, so it is a very good material for homemade machines and jigs for the shop. It can also be used for furniture, I used it for the tops of my computer desk.

I’ve been asked a few time whether Russian birch plywood can be used in its place, since they are very similar and Russian birch is usually easier to get. So in this post and the video, I take a close look at both and make the comparison.

I recently bought some sheets of Baltic birch and had bought a sheet of Russian birch a few months ago, as well, so this is a new product to new product comparison. The previous times I’ve bought and used Russian birch left me less than impressed. The overall build quality was fairly poor, with inconsistent thickness and it wasn’t flat. However this newer piece seems to be a bit better – it is as flat as the Baltic birch panel that I had just bought.
Looking at the thickness, Baltic birch is slightly thicker at .49″:

I measured the panels in several places (at the edge) and the thickness in both is consistent. Looking at the veneer layers closely and there’s no contest for appearance – the Baltic birch looks substantially better. The laminations are a bit thicker and the glue lines are thinner and less noticeable. Of course this wouldn’t have much of an impact on the suitability of the plywood for a shop project, but will be a big factor if you want to use this for a furniture project and want to have the edge exposed.

The Russian birch has notable defects in the core layers, like voids:

It also has more repairs on the face veneer: 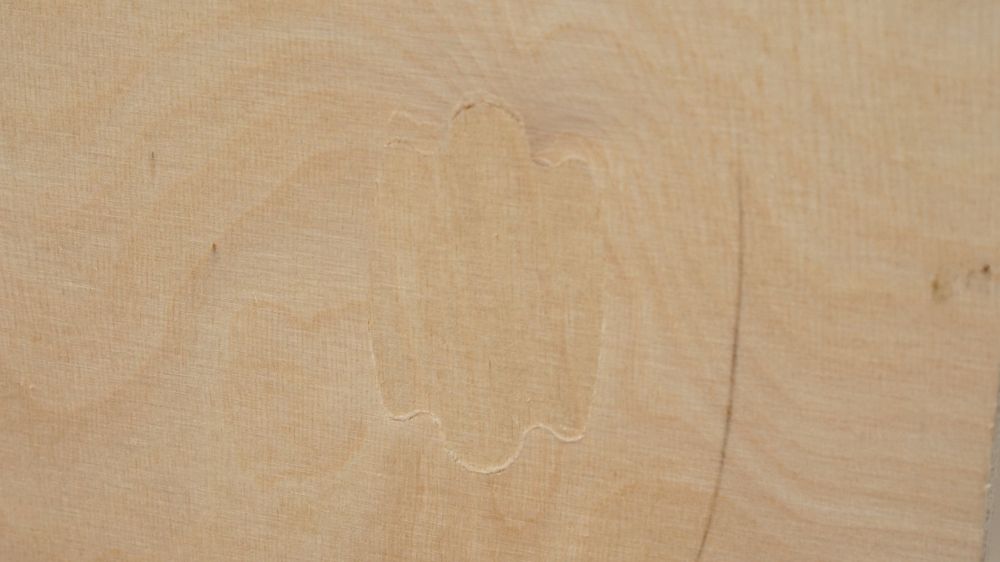 Although neither of these has a face veneer that is suitable for any kind of fine furniture.

The face veneer on the Russian birch also has more “character” in the form of defects in the wood:

Undulating grain and small knots and other markings.

While the Baltic birch is much clearer:

As for price, I’m able to get Baltic birch for much less, but I have to drive a considerable distance to get it. While Russian birch is available locally, it is more expensive and only comes in 2′ x 4′ “handy panel” size. Baltic birch can be had in 5′ x 5′ or 4′ x 8′ sheets.

In conclusion, I’d say that for most of the projects you would use Baltic birch for, Russian birch will be more than suitable. I do recommend being selective when you buy it – look at how flat it is, in particular. A problem with lower quality plywood that is manufactured quickly is that the veneer layers may not be optimally dry before the sheet is assembled, and the will have an impact on how flat the panel will be and how consistent the thickness is.