Blog: Shop Too Small – Build On or Build New? By: John Heisz

When I moved here 5 years ago, my (somewhat unrealistic) idea was to finish the major renovations on the house within a year, and start work on a new workshop. In the meantime, I would use the existing 1-1/2 car garage as my interim shop and set about fixing it up on the inside.

So here we are 5 years later and the upgrades I’m making to my house are still not finished. And I’m still in the temporary shop. However, I am close enough to finishing the house work to start seriously thinking about the shop situation again.
Of course, I’ve been seriously thinking about it all along, especially when I have to clean up the shop. And while doing that rather mindless activity, it leaves me free to ponder how cramped it really is. Shortly after getting here I drew up this fairly detailed plan for a new building that is 24′ x 40′: 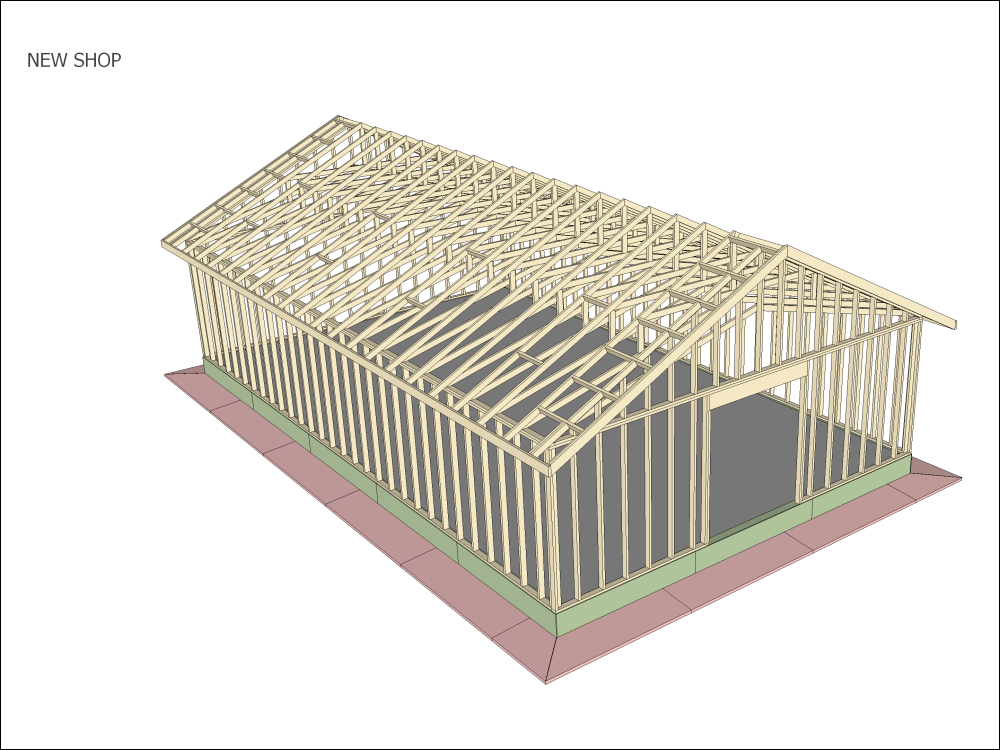 I’ll say that as far as space goes, I don’t need anything huge. While my current shop is too small to be ideal for me, it wouldn’t take much to reach that perfect size. While the drawing shown above doesn’t represent my thinking today, it would be amazing to have a shop this big. I honestly don’t need it for the work I do. And more than that, I don’t need the expense of trying to heat it during the winter.
If I were to build a new shop,  it would be roughly twice as big as the one I have now. I find the overall width of the shop to be the most restrictive, so adding onto that would make the biggest difference.

About 2 years after I moved here, and after making several more improvements to the existing shop both inside and out, I decided that a better approach may be to add onto the shop as it is. It would  give me the extra space I needed, plus it would give me a place to park inside during the winter:

And while I like this idea, there are some potential problems. First, the floor area it adds to the shop is not substantial, and it lengthens the shop rather than make it wider. Still, more floor area to work with and I’m sure I could make the best of it.
The other problem is that it extends the front of the shop out toward the road and I’m not sure that I would get approval for it. Another issue is the total area of the addition plus the old garage / shop exceeds the maximum for a floating slab, and that may require a different (read that “more expensive”) foundation. Whereas a new shop built on it’s own would have none of these problems.

While I can’t say with absolute certainty at this time which way I’ll go, I’m definitely leaning toward building new from the ground up. And when it’s finished and all of the tools in place, I can return the existing shop to a garage again, possibly with a metal working area at the back.

Okay, so if I were to build new, what would it look like?
Probably very much like the one shown near the top of this page, except smaller. I’ve always liked A-frames, so I’ve been giving that serious consideration. The upsides to an A frame is that it would have loft space for storage (probably lumber) and the bulk of the exterior is roof. And they look interesting. At least to me.
The downside is some inefficient angled space where the roof meets the floor slab. I could mitigate that with a knee wall, but that complicates the structure, since the floor is supposed to tie the two roof halves together.
Also, sloping walls on the roof sides. A way around this is to build plumb walls farther inside, but the that floor area is lost.
No, better to go with a more traditional design.

As far as construction, I’d want to make this building as efficient as possible to heat. That means plenty of insulation. The heat source would be the floor slab with PEX hot water lines running through it mainly around the perimeter, but 3′ in from the outside walls to allow for work benches, miter saw station and storage cabinets along the walls. One 40 gallon electric water heater would easily maintain an even temperature during the winter and can be shut off completely when the weather warms up.
Just one entry door (or a double door) and no overhead door. No windows either. I thought about having skylights but have decided the quality of light from those doesn’t play well with making video. Artificial light only from fixtures mounted in the drop ceiling with LED bulbs.

As for the inside finish, plywood instead of drywall on the walls and just paint it with water based poly to keep it looking good. That gives the freedom to mount anything, anywhere, without any issues. A wall on it’s own can become a giant tool board. It also provides a better backdrop for the videos that I make than drywall that’s painted white.
The ceiling would be acoustic tile, just like my current shop. The floor would be the concrete slab, but I would either paint it or epoxy coat it.

Anyway, time will tell with regard to which way I go, but I expect I’ll be moving forward on this within the next two years. I talk about all this and some other things in this video: