Lately, when I’m working on a new project, I try to look for things that are likely to bother me after I finish building it. That way, I can fix them now, during construction. It takes longer, therefore I wasn’t a big fan of this approach in the past, preferring to bull forward and get it done. Now, I’m more concerned that what I’m building be as practical and functional as possible. Having it ‘just work’ is fine, but adding refinements that will make it easier to use or require less steps to use it (like putting the controls on the front, not inside behind a door) will ultimately pay off in time saved while using it. Basically, spend some time today to save much more tomorrow.

So, working on my new router table, I had the funky idea of motorizing the lift. This mainly would be used to spool it up and down faster, for bit changes. While this would be rather cool to see and show off, it is not very practical. Still, with the fine control of this lift (88 turns of the hand wheel to cover the full 3-7/8″ vertical travel, ~44 thousandths of an inch per per rotation), it would take some time to wheel the collet up to replace the bit. I had to come up with another way to speed this up.

Viewing the front panel of the table, it looked kind of bare, with a big empty patch – it has no drawers to decorate it. I pictured a double size hand wheel in this space and thought that it would be a reasonable solution to the problem. The larger hand wheel would drive the smaller one and reduce the rotations required to raise the router by half. As a bonus, it would look pretty neat and would amp up the ‘wow’ factor. More important, it is a practical way to deal with the problem, and although not ideal, it certainly is better than nothing:

Even though this looks fairly easy to do, it was actually a little tricky. The larger wheel needs to maintain constant contact with the smaller one, and given the less-than-perfect machining of the parts and relative imprecision of the hardware used, this presented a new problem. The solution was to mount the large hand wheel on a pivoting arm and spring load it, so it pushes against the smaller wheel:

Works well. The large wheel has a strip of the same rubbery material that I used on my belt sander platform, and this not only improves the grip, it also cushions the contact between the wheels.

I do most of my painting with a sprayer and recently bought a new one, a touch-up gun: 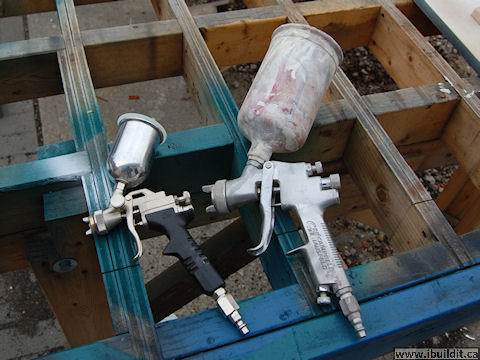 My old one on the right is still in ok shape, but needs a new cup – it’s showing the evidence of my neglect and abuse.

The new one is quite a bit smaller than the old one – the cup only holds 125ml (1/2 cup) and I specifically ordered the gun with this cup, since it is aluminum. It was also available with a 250ml (1 cup) plastic cup, but based on my experience with my old one, I don’t want a plastic cup again. The small cup capacity is one of those good / bad situations: good, in that it’s easier to clean and uses a lot less solvent to clean it; bad, in that it doesn’t hold much paint. Given that the majority of the things I paint are fairly small, I don’t see this as an issue.

I thought this gun would be good to do smaller things, but have found that it can handle larger surfaces as well. What’s more, it is quite a bit better than my old gun and the probability is very high that I will never use the old one again.