While I can’t say that this is a saw that will get a lot of use in my shop, it was interesting to make. Who knows, maybe I’ll throw aside my power tools one day and only use hand tools, or maybe I can use this for special projects, where it’s not practical to use a router.
I made a video that goes through the build from start to finish:

I started by searching for a full size template for a dovetail saw handle, and I found one here. A bit fancier than I wanted, I changed the shape to make it more streamlined:

The wood I’m using for the frame is maple, and I found a piece that was thicker, but just barely wide enough to fit the handle.
At this point I had to make the decision about the grain direction. Since the spine of the saw is part of the handle, I wanted straight grain along that to keep the blade as straight as possible. That meant that the weakest part of the handle would not have continuous grain, and may break at some time. I figured I’d take a wait and see approach and if it does break, I can reinforce it in some way while I glue it back together.
Since I don’t have a 1-1/8″ forstner bit, I used 1-1/4″ for the larger holes and 1″ for the smaller one:

The blade in this saw will not go up into the handle as far as one with a metal spine, so I extended the area below the bolt holes to better support the blade.

Carefully cut it out on the band saw, then reduced the spine thickness down to ~3/8″ nibbling the wood away on both sides at the table saw: 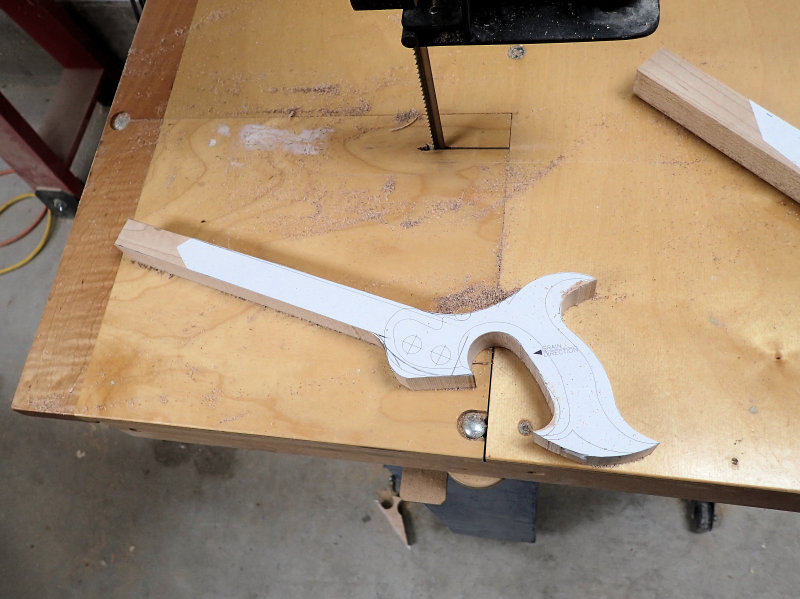 I could have tried to remove that wood on the band saw, but I think this is the more accurate way to do it. 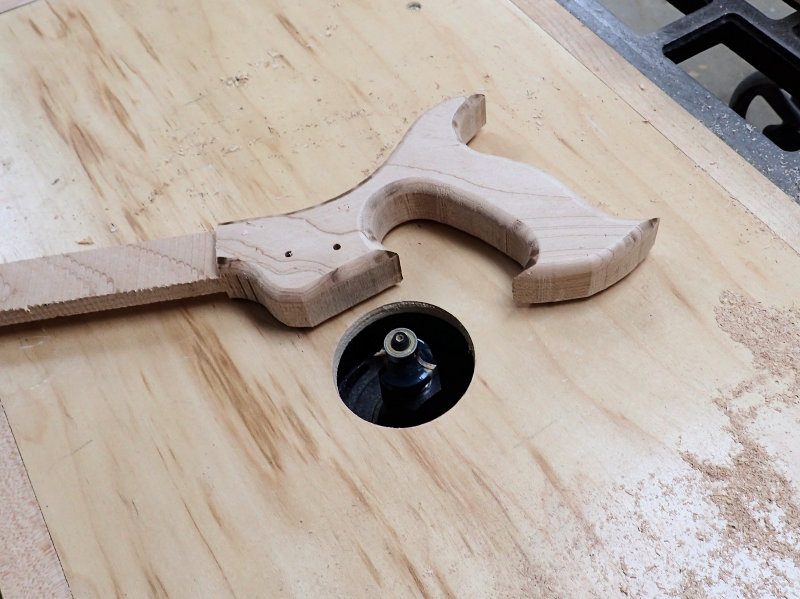 With the rough shape cut out, I rounded over the edges on the handle at the router table. I then took it to the spindle sander and refined the shape and smoothed out the curves. Then back to the router table again for the final finishing pass.
I use this method for two good reasons: first, it removes material that would otherwise have to be sanded, saving sanding time. Second, you wind up with a much cleaner edge after the second pass, since the router bit is not cutting off as much material.
It can also minimize the possibility of chip out.

To smooth the spine, I used a sharp chisel as a scraper, then rounded the transition between it and the handle at the spindle sander:

Trying it out in my hand, I found it a bit blocky near the web, so sanded that a bit deeper:

A lot more shaping and sanding to get the handle to the final shape and smoothness:

The blade is next. I had an old handsaw that I bought for $2 that was kinked, but farther up on the blade. I was able to get enough out of it that was straight and flat. I cut it out slightly oversized, and filed the teeth down flush with the side to keep them from tearing the sandpaper I would use to remove the rust:

Messy, but effective, I used a spray cleaner as lube and 100 grit paper to get rid of the bulk of the rust. Luckily, it was all surface rust, with no deep pits in the blade: 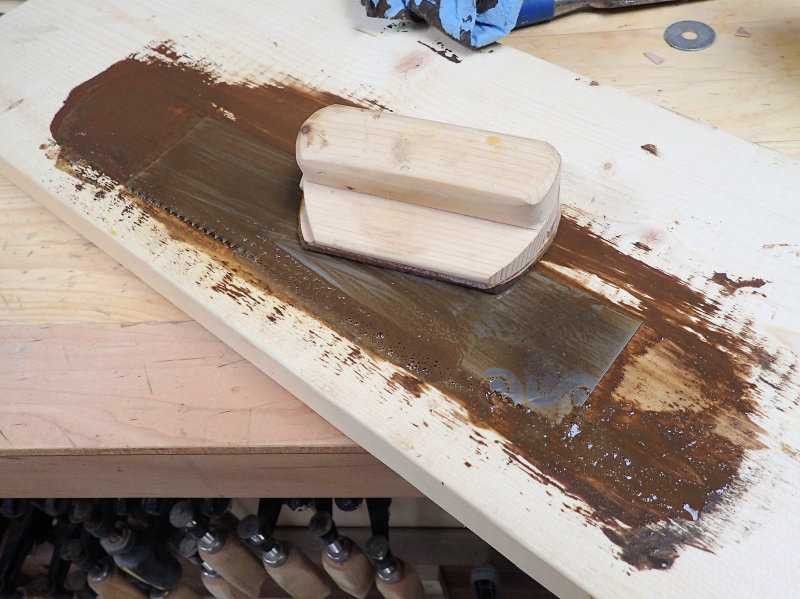 I marked out the final size, 10″ long and 2-1/4″ wide, and cut it out using the angle grinder with a thin cutting blade. 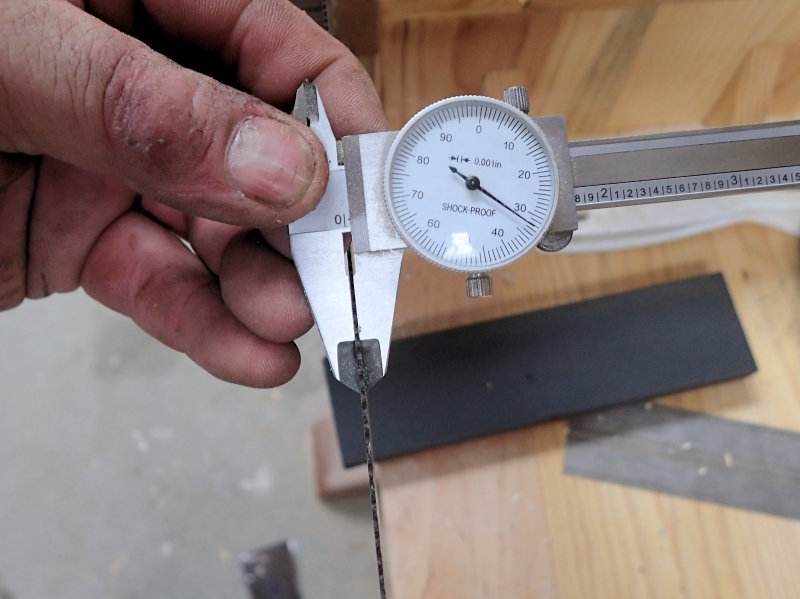 The blade is ok for a dovetail saw at 32 thousandths of an inch. Thinner would be better, but I’m working with what I have.
Besides, the set of the teeth on this saw can be less aggressive for a finer kerf.

Next, the most difficult part – cutting the slot for the blade into the handle and spine:

Originally I tried to do this without sharpening the blade, but soon realized that it would go a lot faster if I did. I didn’t set the teeth, just filed them until they were sharp.

It went much quicker after that: 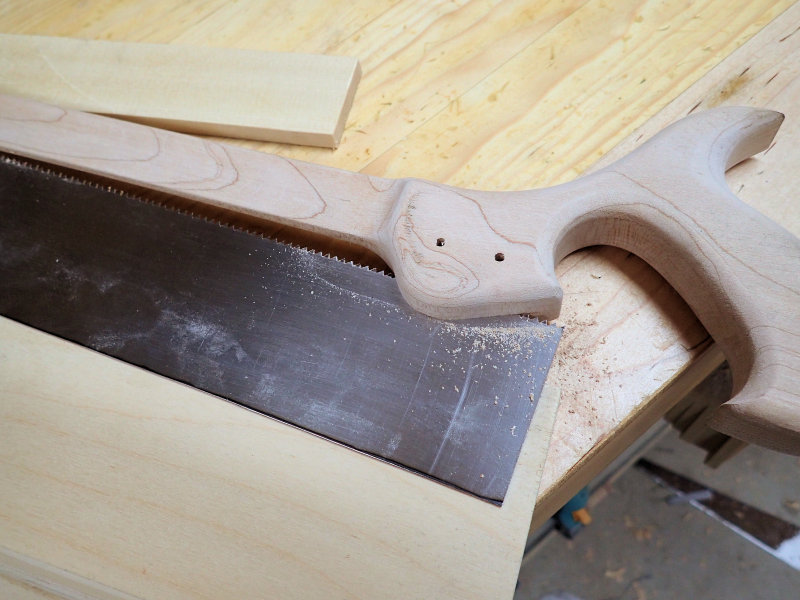 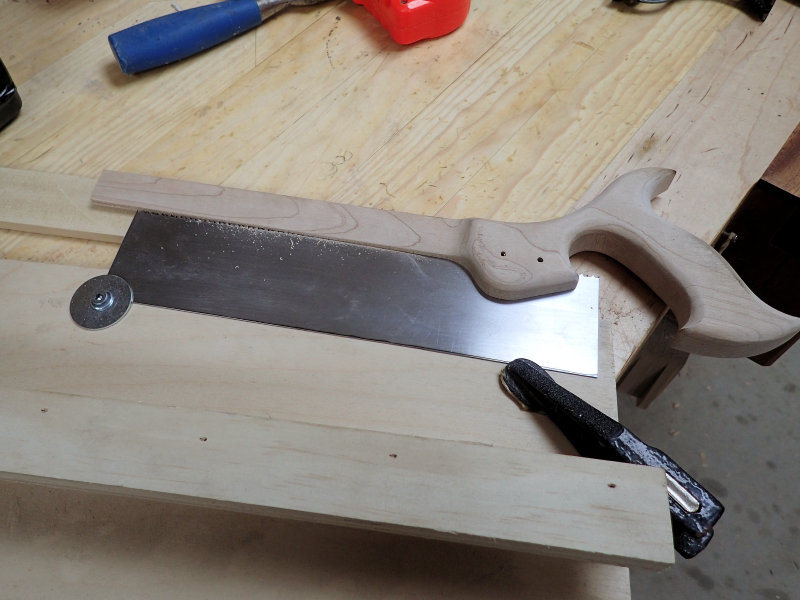 I had drilled two 1/8″ holes in the handle earlier, and used those to mark the blade. I taped the blade into the spine to keep it from moving:

The pins for the handle are just #8 machine screws that were screwed in and trimmed off flush. The blade will never be taken out of this saw, so I glued it into the spine with epoxy: 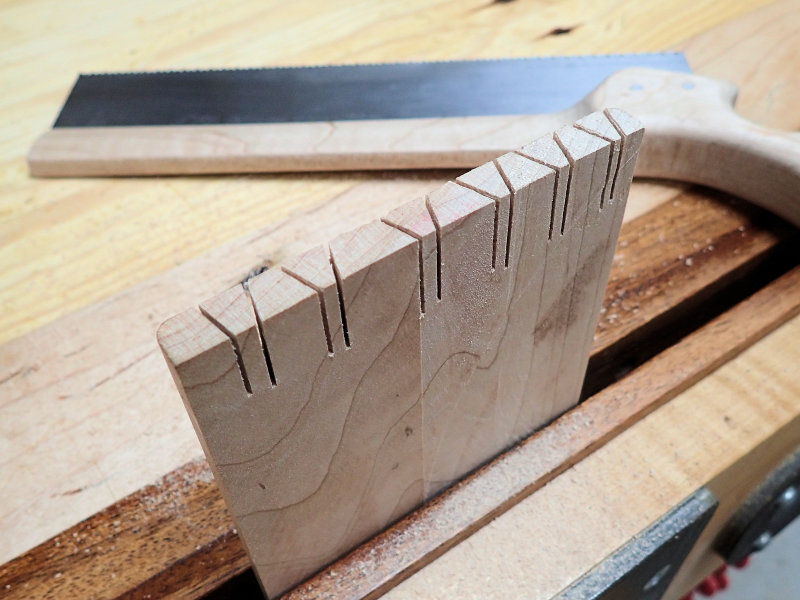 Works well. I retained the original tooth spacing and crosscut profile and the saw has no problem straying on line. It does lack the weight of a saw with a metal spine, but I don’t see that as an issue – I prefer lighter saws.