Last time, I outlined some of my attempts to make musical instruments. I neglected to mention that I did successfully make a solid-body electric guitar, once. I did not consider it much of an accomplishment, since the neck and the other parts were all taken from another guitar. Probably making the neck and fretting it would be the most challenging part of that project.

Anyway, that guitar was an improvement. I made the body out of three maple 2x4s I glued up. I cut it out with a jigsaw and routed the holes for all the components (which, in that instance, all fit under a plastic guard. The body it replaced was actually made from plywood, which I found an interesting and surprising choice. It was, however, an extremely cheap electric guitar from some time in the 1970s.

Now it’s an extremely cheap electric guitar from the 1970s with a maple solid body made in 2009.

Anyway, back to the matter at hand.

When I opened the violin case at the store, I immediately thought it was beyond repair. But that actually shows how little I know about violins. I am certain a real luthier would look at it and say, “I can fix that.” But, then again, that guy has all the tools and experience. I’m really only experienced making things that sound good if you knock on them. 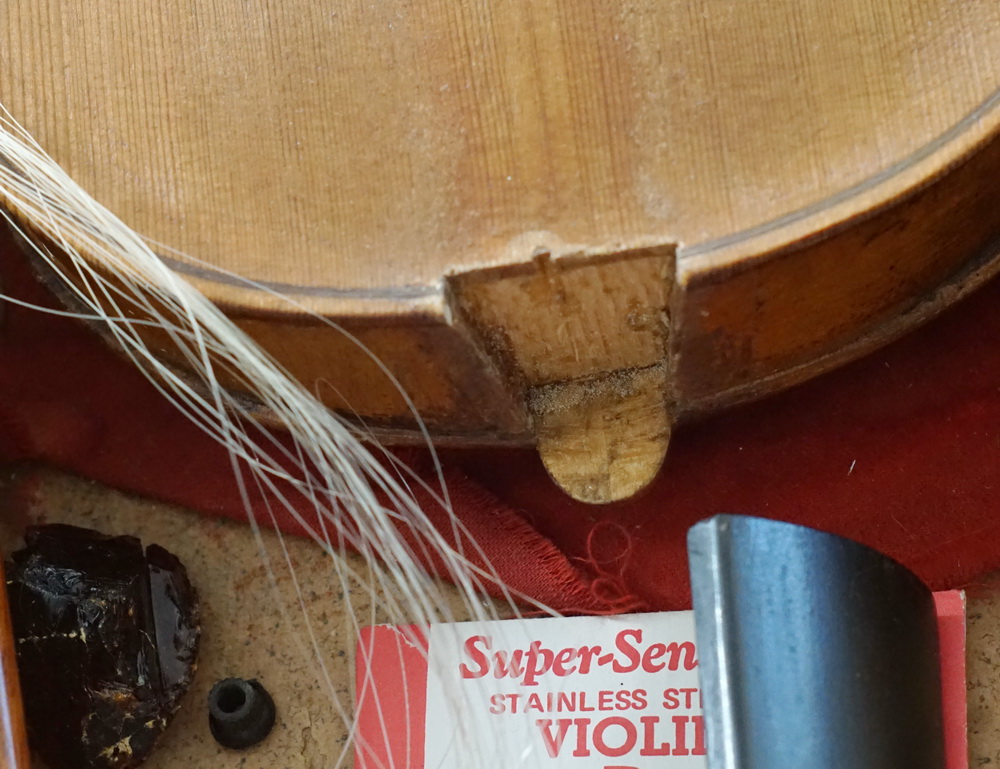 As you can see, the neck had come off the body. A bit of the wood was torn away by the glue. The reason this happened was, quite simply, the violin was stored in the case with tension on the strings. I don’t think it will be too difficult to glue it back into place.

If you look at the edge of the body where the chin-rest is clamped, you can see some separation has occurred. There’s no damage to the wood, but the glue has failed. Someone, at some point, tried to apply some kind of glue to the outside, and I don’t know how easy that will be to remove. It seems brittle, but I haven’t tried anything, yet.

Unfortunately, what that separation means is the body will need to be dismantled and re-glued. I know hide glue was used in the violin, and I have some hide glue to reassemble it. However, I am not entirely sure how to get the thing apart without breaking it (I’m good at breaking things, actually).

So, I went searching on the vast internet for some helpful hints. I will make a startling revelation: I do not follow any advice I find in forums or blogs or anything like that. What I want when I want expert advice is something in a book that has more words than high gloss pictures (this may have more to do with my age than with reliability of sources). So, I found a good book at the Guttenberg Project called Repairing and Restoration of Violins by Horace Petherick, published in 1903. Seems appropriate.

I have not yet read the book. I have glanced through it and see it has the information I need.

Dismantling will come after I get over the feeling that I will totally destroy the violin.

The strings were all tangled and rusted and generally dirty, so I threw those away. The bow has half its horsehair broken, but that’s fairly easy to replace. The tailpiece, if you look carefully, was broken at some point previously and hacked back onto the violin. For those who don’t know (like me), the tailpiece floats over the body of the violin and is attached to a peg at the base of the body by what is called gut cord. The gut cord still in the case, very dried up and not very bendable, seemed to be from some animal or other. I bought a replacement tailpiece with new gut cord. 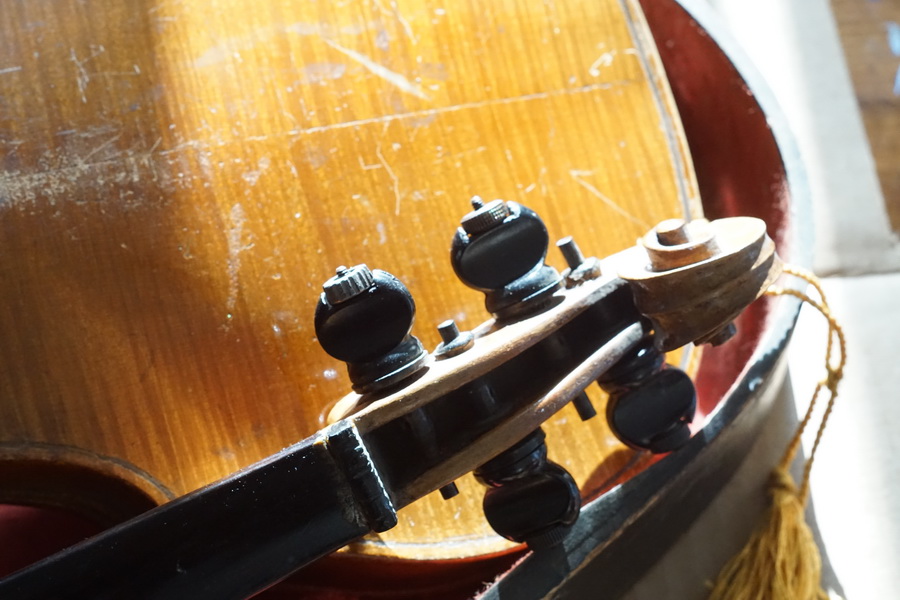 The tuning pegs are not original to the violin. The pegs should be friction-held (they wedge into the holes) and the ones in the neck are set by knurled knobs (a great expression), one of which must have become lost so a replacement was made. I applaud the ingenuity.

The case suffers from some separation, also. I think restoring the case is worthwhile, since it too is around 100 years old, made of wood, a nice size. The case is, apparently, as common as dirt, since the factory that made them churned out thousands and thousands of them. Hard to imagine there is need for thousands and thousands of violin cases, but, by the 1920s, people did need something to carry their machine guns.

As for the finish on the case, it will be no problem to refresh the black and shine it up. The violin is another matter. You are not supposed to mess with the finish on a violin. There are many people with sharp chisels out there who would be very angry if you ever admitted to putting, say, polyurethane on a 100 year old stringed instrument. And this one shows signs of someone doing something to the top finish (it’s oddly uneven) and the bottom finish is scraped off in places.

But the body wood is in good condition. There are no real cracks in it that I can see (there are scratches).

Once I figure out how to take it apart, I will gain some confidence and actually start. I will likely begin with the case, which has also been assembled with hide glue. There is a good amount of work to do there, since the inside has been torn apart.