How To Make A Workbench Workshop Projects

Filling a need that I really didn’t have, I built this workbench:

It seemed like a good idea at the time and I’ve always wanted this type of bench. Not much of a workshop if you haven’t got a solid, impressive looking bench, complete with tail vise, dogs, and massively thick top with sliding dovetails.

I had a pile of lumber that I had recycled from a deck and I thought that a pretty good use for it would be this project. The lumber had been stacked in my workshop drying for nearly a year and was very well seasoned. In rough shape, it took a fair bit of time to clean up and mill flat and true. Worth the effort, I figured, as there was a considerable cost saving in reusing this lumber.

I designed this project before I discovered SketchUp. In other words, I just went out and started building, with a rudimentary plan in mind after looking at a few designs online.
I started with the base:

Unfortunately I didn’t take any photos of the build before this point, but the details will be clear in the SketchUp drawing at the end of this article.

The feet are made up of 3 layers, with the legs let in, similar to the upper supports. It’s much easier and stronger to construct the trestles this way, rather than assembling the foot in one piece and cutting mortises in for the legs. Also, lacking a band saw that can cut material 4 1/2″; thick, I cut the round over detail (and the bottom undercut) in each single piece before it was glued up. After the glue dried, all I had to do was round the corners and sand everything smooth and flush. To improve the way it looked and to seal the wood, I sprayed on 3 coats of Polyshades urethane/stain mix. The colour was “;Old Maple”; or “;Natural Cherry”; – I’m not sure.

The top is a mix of woods, with the recycled spruce comprising the majority. Hardwood tops are more durable than softwood ones, but there are advantages to using a softwood: they are less expensive, easier to flatten and you can screw things down to it, without fear of breaking the screws. Not everyone wants to drive screws into their workbench, but I do – it’s aworkbench, after all:

The edges and ends are hardwood, mostly hard maple (recycled also, from packing material and skids) with some red oak used for bench dog spacers and loose dovetails. Basically, all of the wood for this bench was free.

I wanted sliding dovetails on the ends, for strength and to allow the top some freedom of movement across the grain. I had a problem though: how to cut the end of the top for the dovetail? After some thought, I decided the most practical way was with a circular saw. Tricky but doable, I clamped a support on the edge for the base of the saw, tipped the blade and made the cuts free hand:

With the tail cut in the end of the top, I cut the loose dovetails (seen above) from red oak on the table saw. These I biscuited and glued to the maple end rails. On the tail vise end, I drilled out for a 1/2″; threaded rod (see below) to help hold the end rail in place. The threaded rod is about 6″; into the hard maple and glued in with PL Premium construction adhesive: 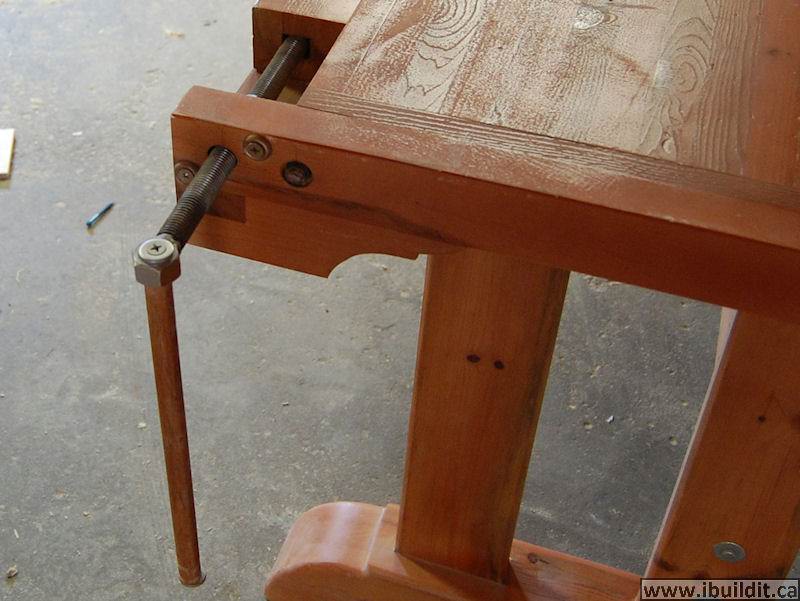 The vise is homemade. Some things I do for economy, others (most) I do for the challenge and the simple reason that I enjoy doing it. The vise satisfies both of these easily:

The main component is a piece of 3/4″; threaded rod that is 12″; long. It has a nut welded on the end that is inside the moving jaw. Again, no photos of this but it will be easy to see in the SketchUp drawing. To drive the screw forward and back, I welded a nut to a larger washer and smaller nuts to the washer to fasten it to the end rail. These small nuts are 1/4″;-20 and 2 bolts go through the end rail to secure the nut assembly.

Another nut was welded to the other end of the threaded rod, this time in this position:

It is the mount for the handle. The handle is oak with washers screwed to the ends to prevent it from slipping off.
The moving jaw slides forward and back in a track underneath the table. The track is made from hardwood and very firmly holds and guides the jaw.

The trestles are attached to the big stretcher with a pair of 1/4″;-20 bolts that screw into flat “;counter top”; nuts in holes drilled in the stretcher. At the time, I had doubts this method would be strong enough but 2 years later there has been no movement – the joint is just as tight as it was when I made it. Of course, having the base assembled this way makes it easy to take apart. The trestles are fastened to the underside of the top with lag bolts: 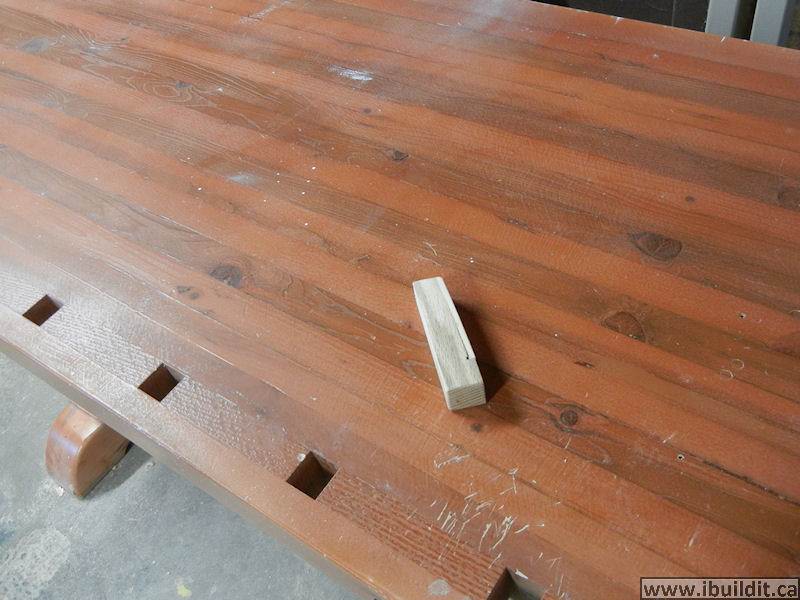 The bench has been used, but mostly to pile other stuff up on. Given my recent drive to organize, there is a good chance I’ll be using this bench for its intended purpose soon.

Finally, a look at the top as I was finishing it:

It is very flat, the product of much planing, sanding and checking. Today, it is still flat and has held up very well. The top has no cracks there has been very little movement across the grain – attribute this to the top being made from well seasoned wood and well sealed.

With my recent shop renovations done, I thought I would make my work bench a little more inviting to use. For the majority of its lifespan, the bench has been used to store things on, and I have done much of my project assembly on my table saw. For good reason: the bench top was a dark colour that I really didn’t like, whereas the table saw is a nice light colour. Things like that make a big difference, for me (and for this site – pictures do not look good against the dark top of the bench). Also, with my shop in such disarray most of the time, the only surface that remained reasonably free of “;stuff”; was my table saw.
So, the first step was to get rid of the dark colour. I stripped and sanded the top down to bare wood, then wiped on a coat of polyurethane. This was an improvement, but it revealed one of the reasons I used the darker stain in the first place – to hide the ugliness of the wood I used and the filler to close up places where there were chunks taken out of the wood:

Hey, it’s a work bench, right? Yes, but I knew if I didn’t make it look a bit better, it would probably not get used and end up collecting junk again.
Before I had the quick release vise, having the tail vise open on the side was handy and practical. Now that I won’t be clamping larger things in the tail vise, I’d like to add a piece of hardwood to the edge to give it some extra support.

Another slightly nagging thing is the two oversized recesses for the heads of the bolts that hold the vise to the table. It would be nice to fill these, without limiting the bolt movement:

To adhere this new layer, I used polyurethane construction adhesive:

Spread out fairly thin with a putty knife. The advantages of this glue is very high strength, moisture resistance, no water content (water swells the wood, making it expand) and the rather attractive features of long open time and low temperature setting. The workshop is fairly cold at this time of the year, and this glue will set above 5 degrees (Celsius), as opposed to wood glue, which really should be used at room temperature.

Then used lots of clamps and a few cauls to push the strips down tight to the surface until the glue set:

I then added solid maple and oak cut to the same thickness to cover the perimeter, and gave the top three coats of oil based poly to finish:

With its bright, new appearance, I don’t think I’ll have any qualms about working at this bench.