I had a very small amount of epoxy grout left over from doing the base in my shower and thought I’d heap it up on this piece of plywood and let it set: 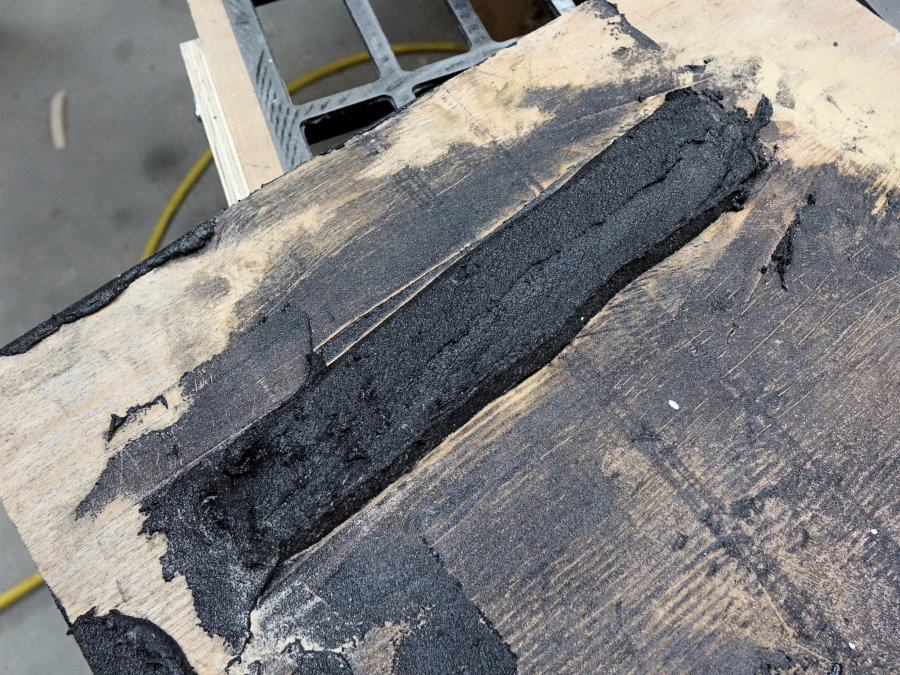 Thinking that it might be interesting to make something from it, specifically a handle for a knife.

The video at the bottom of this page goes into all of the details, including cutting this stuff on the table saw into a somewhat usable shape. Being grout, it has sand in it and that made it especially tough to cut:

The knife I want to use it on is my favourite kitchen knife that I made from a broken knife many years ago. At the time I welded a new tang to the blade, but I just used regular mild steel, and as you can see it rusted pretty bad:

I made the handle in one piece from sapele and just glue it to the tang with epoxy. I used the knife for several years without applying any finish to the handle, and I guess that’s what caused the bulk of this rest.

I managed to just barely get the two scales from the piece and cut them to fit around the blade tang: 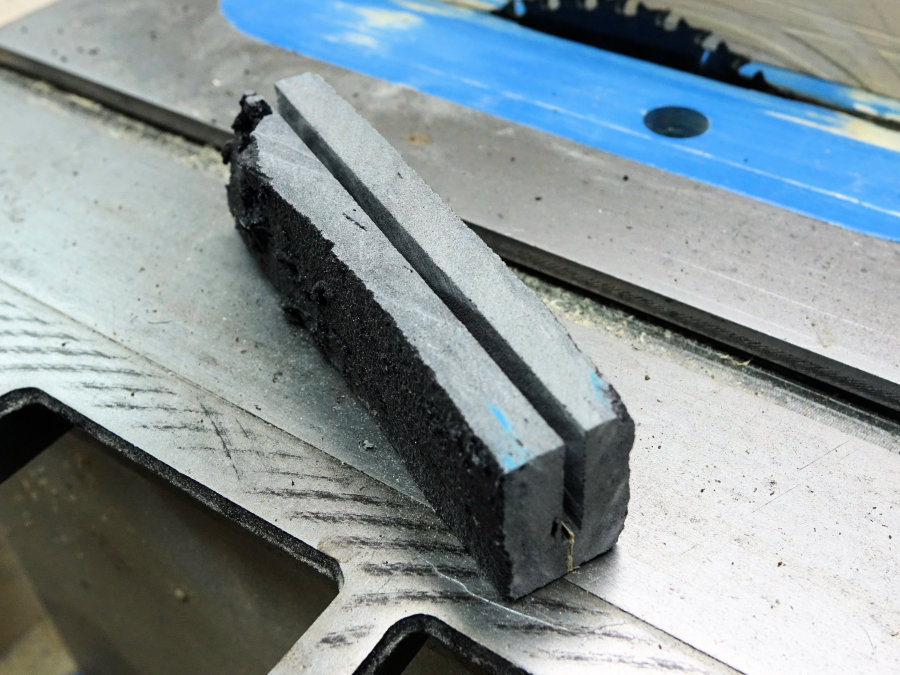 I angled the handle like this to avoid an area where there was a gap in the epoxy grout, but I immediately liked the wedge shape the handle would have: 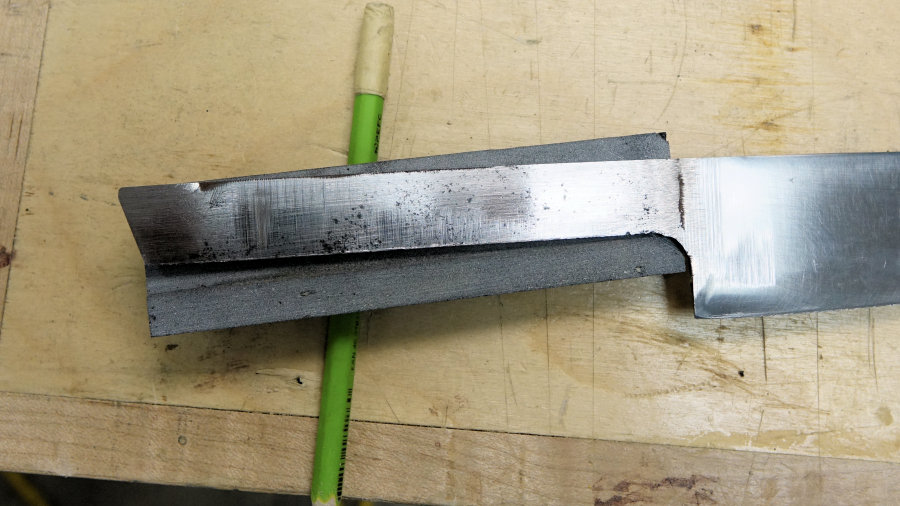 On to the tricky part – gluing on the scales. I didn’t have anything to colour my regular epoxy black, so I thought I could use this 10 year old black casting resin:

As shown in the video below, it took three tries, and a lot of mess. It is now several days later and there are still bits of that resin on my fingernails.

But, it all worked out in the end and after much shaping and hand work, I have my knife back:

I tried something different on this one – copper pins made from ordinary house wire. Both locations were supposed to have seven strands, but in the heat of the battle to get it assembled I missed one. Anyway, just a bit more character.

I spent some time cleaning up the blade as well: 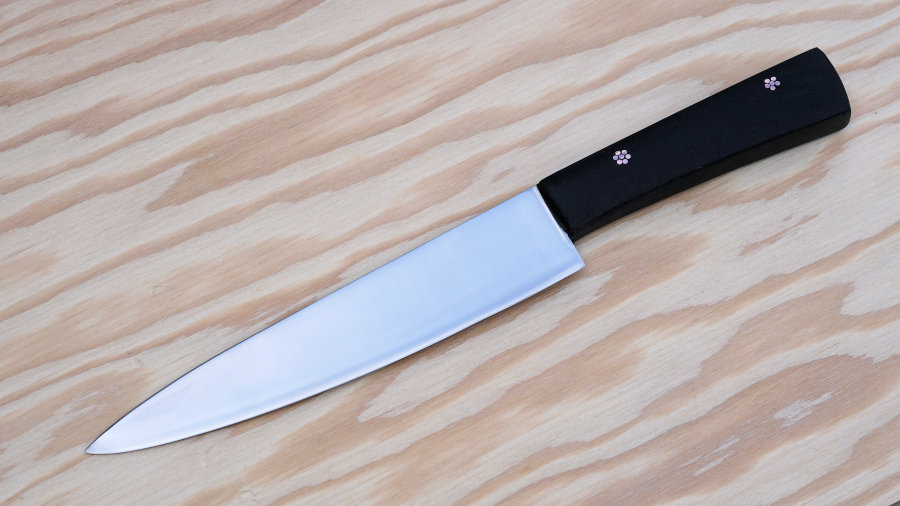 Close up of the copper pins: 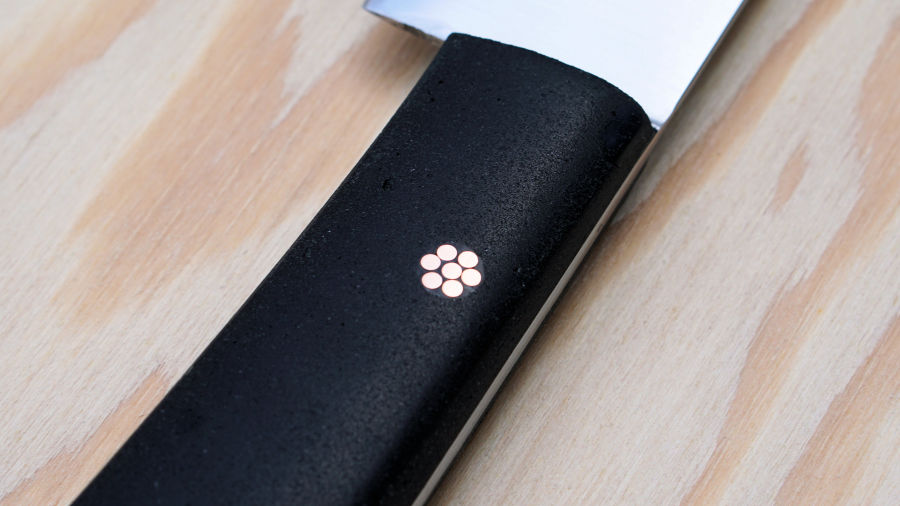 Since the epoxy grout doesn’t absorb water like wood, the tang should stay protected. I polished the edge that is exposed and that polishing will help to keep this free from rust:

After I had it and the bricks installed in the oven, I hooked up a cord temporarily to test it:

I made a detailed series of videos: