Soon after finishing my workbench chest of drawers project, I realized that the drawer storage system of organization is better suited to more infrequently used tools. Or, at least that’s how it is for me, since I lack the discipline to put tools back after I’ve used them. I guess the extra step of opening the drawer is just enough of an obstacle.

Having come to really appreciate the convenience of the organization system used in my drill press cabinet, I figured the same could be used for often used hand tools over at my workbench. As for how the tools will be mounted, I went with the same method – slatwall. The slatwall system has several advantages over other options, like pegboard. First, I really don’t like pegboard – it’s ugly and flimsy and reminds me of 1970’s horror films. Another is the very popular French cleat system, which works well, but uses gravity only to hold (as opposed to an interlocking slot). Tool holders, especially small ones, that are just hung on French cleats can be easily knocked off.

One benefit that I really like is how the slots can be completely filled to prevent dust from settling in. Another is how easy it is to add and remove new tool hangers and to reorganize the whole arrangement.

To start off, I made a detailed video showing the build from start to finish:

I began by figuring out exactly where it should be, and how big. When I went to buy the materials for this, I was surprised to see that “;real”; MDF slatwall was $77 per sheet. Just as well, since that product is not really well suited to what I wanted for this. Instead, I bought 1/2″; spruce sheathing and worked up a plan to build the project from just two sheets.

I cut 24″; off the end of both full sheets, as I want the unit to be 72″; long overall. I also ripped 4-1/2″; off the edge of the first one, since I needed that to use for the bins section and didn’t want the board to be the full 48″; wide. I mounted that on the wall temporarily with two finish nails driven into a wall stud :

Next, I ripped the other sheet into the right size strips needed and ran them through my planer. Spruce sheathing is not the most attractive plywood, but can look good if you take the time to make it smooth.

The slats are cut 2-3/4″; wide and have a 1/4″; x 1/4″; rabbet cut into the back edge. I chose to do this on one side only, to form an “;L”; shaped slot, but it can be done on both edges to get the traditional “;T”; shaped slot. The T slot may provide more flexibility for hanger options, but I think that would be fairly insignificant and not worth the extra work:

At the bottom of the tool board is a row of open bins that will hold the screws and hardware I use regularly. To make these bins, I cut parts that are 4″ square to use as dividers and fastened them together in a U shape: 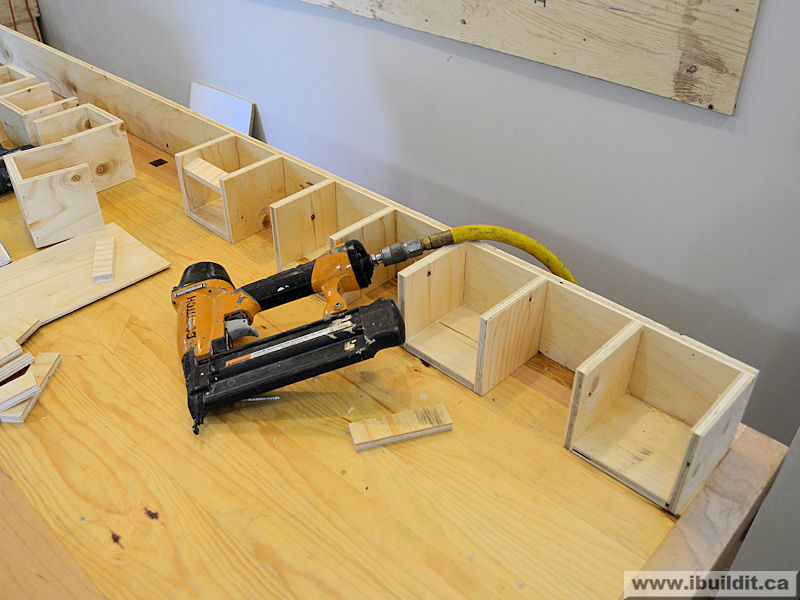 The back of the U is there to allow me to attach the bins section to the backer board easily. It took eight of the U-shaped parts and a single divider in the middle to complete: 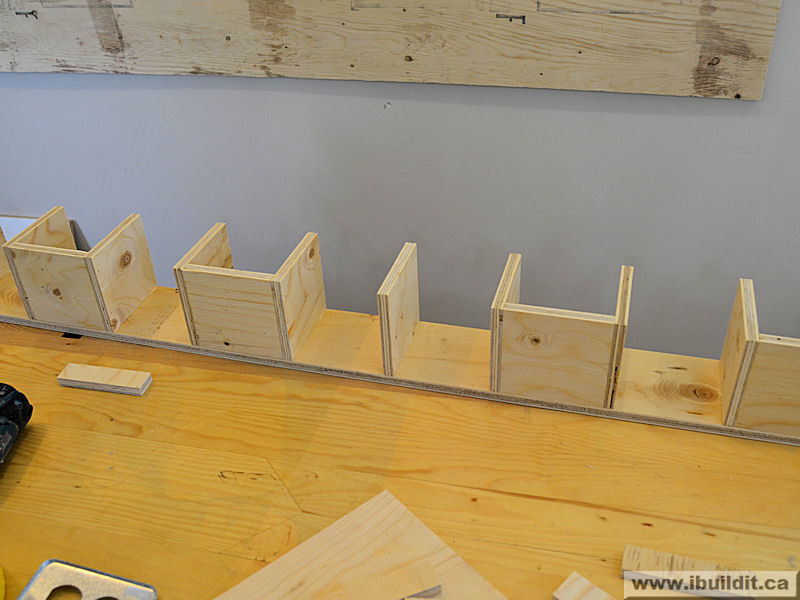 The bins section assembled. Everything is glued and nailed butt joints, which will be plenty strong enough for this:

I added solid wood to the top edge and bottom. The bottom piece acts as the front of the bins as well.

It was then screwed in place on the backer board. Four screws were driven through to the wall studs to provide maximum support for the whole tool board. Two more screws will be driven into the wall through the top corners of the board after the slats are installed. I want all of the fasteners accessible, to make it possible to move the tool board:

The slats are glued and nailed to the backer with 3/4″; brads. As I may end up moving this board at some point, I don’t want a bunch of holes in the wall behind it, and that’s why I used 3/4″; nails:

The slats are spaced 1/2″; apart. I used a blank 8″; panel above the bins since the top of the bins will probably be used as a shelf. When they were all installed, I gave the whole thing a single coat of satin polyurethane to give it some protection from dirt.

Here’s a look at the edge, showing the rabbet in each slat:

Rabbeted strips will fit in there and I’m cutting those from well seasoned spruce 2×8 lumber:

A week after finishing the tool board, I finally got all of the holders made and the tools loaded onto it. I made a video showing that, plus installing the new power tool cubbies detailed in this part of the project:

The idea for this came about as a natural extension of what has been done already. It made sense to use the space above the tool board effectively, and I couldn’t think of a better way to do that than as a convenient place to keep my often used power tools.

Once again, I’m using 1/2″ sheathing plywood. One sheet is more than enough to finish this project.
Here I’ve cut the sheet into equal size pieces for the bottom, top and back, and I’m using simple butt joints that are glued and nailed to hold it together:

Next, I cut a few dividers and figured out the spacing for the tools that I will be keeping in it:

The dividers are installed and I let the glue dry for an hour.

To dress up the edge and make it more durable, I want to band it with solid wood. These are strips I had that were offcuts from another project:

To add some strength to the structure, the banding on the dividers laps over the bottom and top shelf. Normally, it’s easiest (and looks best) if the banding is continuous along the top and bottom, but I figured the added support was worth the extra work:

The banding is glued on and held in place with pin nails:

With all of the banding installed and the glued dried, I lightly sanded it before giving it a coat of satin polyurethane:

A day later, I installed it above the tool board:

I think this ranks near the top of my list of most practical shop projects, and will undoubtedly save me a lot of time and frustration on future projects.