After six years of continuous operation, I officially retired the computer inside my wooden computer case. I replaced it with the newer one that I built roughly a year ago that is once again housed in another wooden case. That leaves me with the question as to what I can do with this older case, and since I’m having space issues with my office / editing computer, I figured I’d modify it for that.

So here it is before I got started taking the guts out: 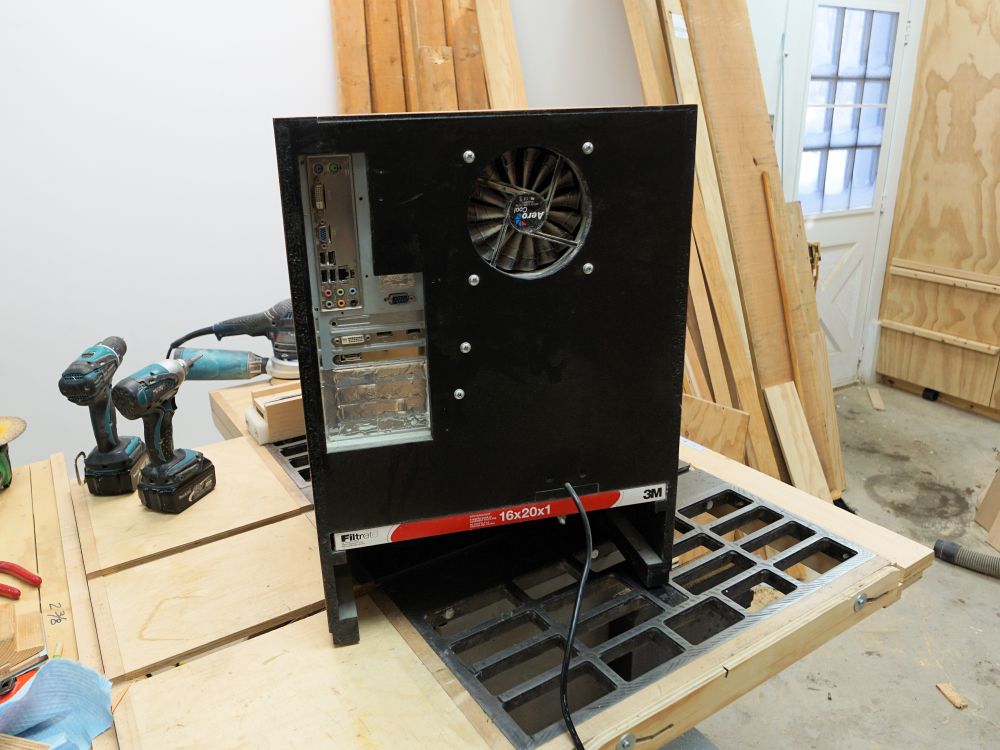 The back side showing the big exhaust fan and the slide in filter. Also shown is the back of the motherboard tray with many of the PCI slot openings covered with foil tape. I did that to stop the bigger air leaks and force the bulk of the airflow through the big filter.

I made a video of the tear down, if you’d like to watch it, but here are some of the highlights. I hadn’t cleaned the inside of the case in more than three years, and only blew the dust out of the filter more or less yearly, so some had collected inside:

Not unusual and a whole lot less than would be in there without the filter. In case anyone wants to know, the old computer was a core2 duo with 8GB of ram and a fairly decent video card for 2011. The the rig was never for gaming, just for basic HTPC stuff and web browsing.

The hard drive rack comes out in one piece. I want to reuse this and two of the larger drives for the new setup. I use these primarily for easy to access long term backup:

To begin with, I glued in the door that used to open on the front of the case. Just a strip of masking tape to hold it still while the construction adhesive I squeezed into the corners dried overnight:

The next day, I covered that door panel on the inside with a piece of 1/4″ plywood to cover the gaps around it. The plywood was reused from the back of the DVD drive compartment in the old arrangement:

Next I fixed a mistake I made during the original build. The opening at the back wasn’t quite wide enough and got in the way for certain things. Even though it may not be a problem for the new configuration, I thought it was better to just fix it now while I was doing the other work. I set up a fence to guide the trim router to remove the material to make the opening 1/4″ wider:

The case had a single 6″ fan and I want to replace that with two 5″ fans that are supposed run quietly. The problem is the hole for the old fan is too big for the new ones:

While that single 6″ fan running at full speed might be enough to adequately ventilate the case, the fan is six years old and may be near the end of it’s service life.

So I made a plywood bezel to mount the smaller fans and cut the back panel to fit that. I made a lip on the bezel make it look more low profile when fastened to the back:

Next, the fun begins with cutting the case 2″ shorter. I made a shallow scoring cut first to prevent the veneer from chipping out:

Then moved the table saw fence very slightly and cut the rest of the way through. You can see the stepped cut here:

To cover that raw particle board edge and also to widen the “footprint” of the case, I cut trim and fastened that with glue:

Spring clamps hold it in place while the glue sets:

With that out of the way, I could move on to the next tricky operation – cutting a hole through the front panel for the blu ray burner. I figured the best location for that was close to the top and centered:

I used masking tape to draw the outline on, but if I were to do this again I would just use a fine marker directly on the veneer instead. The tape was more or a nuisance, snagging on the base of the router I used to fine tune the cut after first cutting it out with the jigsaw:

I made a special U shaped fence to clamp on to guide the trim router to clean up the long edges:

And did a fair amount of hand work with my sanding files to adjust the opening for a perfect fit:

The only other thing to be added to the front of the case is a new power switch:

I drilled a 3/4″ counterbore then a 5/8″ through hole for that, then coloured the edge with a black marker:

The switch sits flush with the surface and has an LED that will illuminate the ring:

Last thing to do was to sand the veneer and give it a fresh coat of danish oil to make it look new again:

I gave the danish oil a full day to dry before moving on to the next phase, which is installing the new computer hardware. I say new, but the bulk of this hardware is two years old. I upgraded my editing computer back then and used just about the cheapest case I could find to put it in. But the addition of two larger video cards pushed the limits as far as cooling and space go, so I had to run it with the side panel removed to keep it from overheating. The lack of space and insufficient cooling are two of the big problems that this case will solve.

I made a video going through the modifactions I made to the case:

To get started, I mounted the hard drive rack directly to the front panel, without its spring loaded cradle. Drive noise will not be an issue for this case, since I’ll only use those drives for backup purposes. I also fastened a plywood platform at the top to support the blu ray drive:

I cut and added metal brackets to secure the drive after it’s installed:

The old case. You can see how everything is shoehorned in, especially the two video cards:

I pulled all of the components out and took the power supply, motherboard and video cards out to my shop and blew the accumulated dust out. I want them clean before installing them into the new case.

While I was out there, I made two simple brackets to secure the power supply to the side panel of the case:

The washers hold it in but don’t block any grill openings. This is a modular supply, so all of the cables plug in at the top, face up in the case.

Before mounting the motherboard, I had to add and improvise some standoffs for the old tray. I used pieces of 1/4″ plastic tubing and #4 bolts in place of proper standoffs where there were only holes in the tray:

With the motherboard mounted on the tray, I installed it inside the case and connected the power switch:

I used the leads from the old metal case and soldered those directly to the new power switch:

As I said earlier, the switch is illuminated and I connected that LED to the power LED pins on the board.

These are PCIe risers that I bought a few months back. The idea was to mount the video cards up off the motherboard for better airflow, but as it turns out the use of a single one of these cause my editing program to become unstable, so I had to remove it:

Most of the minute to minute operations in this computer are happening on solid state drives. That includes the video editing and I have a 250GB NVMe SSD installed specifically for that:

The OS is installed on a standard 500GB SSD and I have an older 64GB SSD that I use as a scratch disk for picture editing and also for video rendering. Those are the two plugged in beside the four mechanical drives:

I made a simple rack for the SSD’s with space for one more. I doubt I will ever need it, but I figured it’s easier to do it now than try to fit it in later:

Next is the failed attempt to mount one of the video cards up off the motherboard. I screwed on a plywood block to attach it:

Then cut a stick that went from one side of the case to the other to support the other end:

I glued blocks in place on either side (spring clamps, above) to keep the video card from moving.
Unfortunately, like I said above, my editing program would freeze while the card was attached with that riser cable, so I had to go back to having both cards plugged in directly. As it turns out, now that this is in a more spacious case, it didn’t need to be mounted off the board. Both cards are running a full 10 degrees C cooler than they were before.

But I didn’t figure any of that out until after I took all of these pictures, so here it is with the video card off the board from above:

Another problem that I had was that I mounted the power supply too low, and the power cord would interfere with the filter sliding in and out. To fix that I just glued on two blocks to lift it up slightly:

I pulled all of the foil tape that was on the back panel, since I didn’t know which slots I would use:

Then used gaffers tape to cover the holes:

Again, that had to be changed as well, when I reinstalled the other video card onto the board.

New $27 filter. Bright and clean, but not quite 1″ thick, so I had to add wooden shims to push it up tight to the bottom (yellow arrow):

With all of the components installed and connected, I got it hooked up and turned on. A few hiccups with the new drives I installed, but I did eventually get it back to normal.

There are still a few tweaks that I need to work on. Biggest one is fan noise, as I talked about at the end of the video below. I’ve tried a couple of different things to reduce the vibration that is transferred to the case from the running fans, and I am making progress. It’s at the point now where it is tolerable.

Here’s a video I made while installing the hardware: