Building A Corner Cabinet for the Kitchen General Woodworking

For me, motivation can take a strange path, and this project is a pretty good example. It actually starts with fixing up my shed for metal work and how I had some sheets of MDF out there that should be in my workshop, and not having the space to put them. It also has to do with me recently buying more sheets of Baltic birch plywood that have been blocking the door into my shop, and having to move them whenever I wanted something from my scrap wood cabinet.

Even though I have a small sheet storage area in my workshop, it’s been full for the past 2 years mainly with four sheets of 3/4″ plywood. I bought these sheets (on sale for a price too good to pass up) to build my kitchen cabinets, but have lacked the motivation to build them. Even though my kitchen is far from finished, it does have a few temporary cabinets that work well enough for me to justify not building the new ones. Until now, that is – I need to free up that space in my shop, so those sheets have to go.

I started with a fairly detailed drawing in SketchUp to get the basic dimensions for the parts, then pulled out one of the sheets and set it on top of my temporary table saw:

I used the circular saw with a guide clamped on to break the sheet down into smaller pieces:

Then switched to the table saw when the parts were a more manageable size. While this type of cabinet is probably the most complex you would ever build for a kitchen, it’s worth mentioning that it can all be done with fairly basic shop tools.

Even tricky 45 degree cuts like this one are possible using the polar opposite of an expensive cabinet saw:

With the major plywood parts cut out, I could get started on assembly by joining the side panels to the flat back panels. Here’s a neat trick for holding the panel upright using two clamps:

After the parts were glued and nailed together, I clamped them up and set it aside to dry for a few hours:

Side note: I’m really liking how these wooden bar clamps work and how convenient they are to use. The biggest benefit is the weight, or the lack of weigh, that is – they are so light compared to the metal ones.

In the meantime, I milled the parts for the face frame from rough maple stock that I, again, bought two years ago for this project:

But leaving the hardwood to season for that long was a benefit, since it allowed the stresses from rapidly drying it in a kiln to relax.

I also got the odd shaped shelves cut out for the cabinet. I took the time to make sure the first one was exactly the right size, then used that as a pattern for the other two:

Cutting out two of these used up the last of that first full sheet, so I had to use a piece salvaged from an old project (TV stand) for the third shelf:

Yes, more than a full sheet of 3/4″ plywood for this one cabinet – it’s going to be heavy!

Next step was to fasten the shelves to the “L” shaped side / back assembly with glue and brads. All of these shelves are fixed, even the middle one, so not shelf pins here:

The bevelled on both sides back panel is fastened next. Again, with glue and brads:

Then the other side / back panel assembly is attached, completing the basic cabinet carcuss: 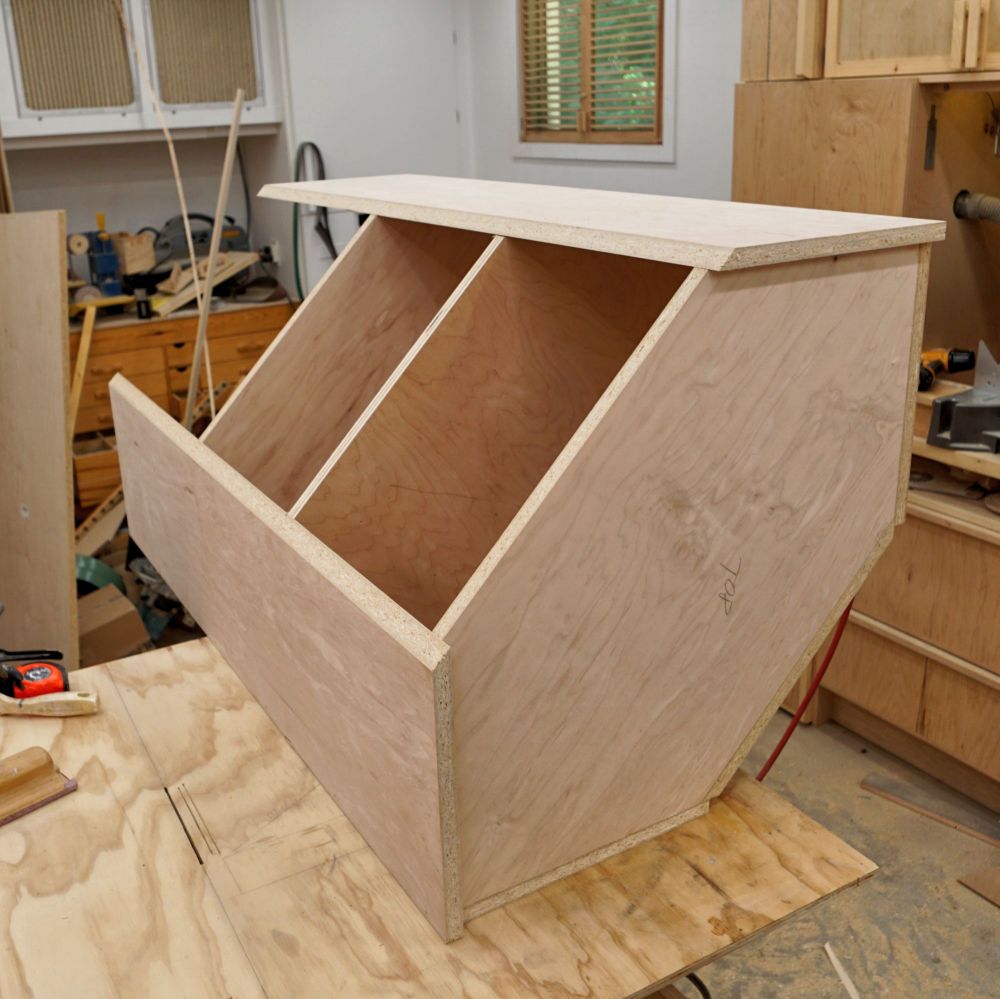 I prefer to have the cabinet assembled before cutting the parts for the face frame, and show how I do that in this video. That’s especially true for this type of cabinet – it’s odd shape makes it difficult to build exactly to plan, so measuring the parts after is always the safest route:

I used 3/8″ dowels and polyurethane construction adhesive to assemble the face frame, then clamped it up and set it aside to dry:

After 2 hours in the warm summer temperatures, the glue was hard enough to get the face frame fastened to the cabinet. Again, I used poly glue and brads to lock it in place, before clamping it up:

I used the brads sparingly and tried to put them in places where they would be hard to notice, or covered by the door that goes on this cabinet. Fortunately, the filler I used for these holes really does a good job of blending in with the natural colour of the maple:

After the glue had set and the filler dried, I sanded the cabinet thoroughly before bringing it outside to paint. Here’s a closer look at one of the face frame joints after it’s been sanded:

I’m using water based polyurethane and spraying on three coats. After the first coat dries for a couple of hours, I saned it with 400 grit paper and sprayed on the two final coats:

This results in an awesomely smooth surface that was incredibly fast to do. I’d estimate it’s at least four times faster than brushing and produces a much better finish.

The last step is to install the cabinet in the kitchen. And given its size a weight, that was not the easy part. First attempt to slide it in place between the countertop and the drywall bulkhead above failed – it wouldn’t fit. It was just a bit too tight, so I planed some off the top before trying again. This time it did go in and I could mark the bottom to scribe it too the tile countertop. Then, of course, take it down again to plane the bottom to that scribed line. After another check on the fit and another bit of planing, I was finally satisfied and took it down again (!) to seal the bottom of the side panels with two heavy coats of poly:

The poly will seal the plywood and solid wood where it meets the countertop and I did it even though I will caulk this seam after the cabinet in installed. Better to take the extra time now rather than be sorry later if water happens to get in there.

Anyway, here’s how it fits to the countertop after scribing:

And here’s how it looks installed:

You might be wondering about the opening on the bottom, and this is what’s known as an appliance garage. It will house those small appliances (like food processor) that are used occasionally and are hard to store. It will be covered by a roll up (tambour) door, and that’s an upcoming project.

I made a video going through the build from start to finish: