Like my 6 Channel Amp, this is another one from 2008 – 2009. Which, so it seems now, was probably my most productive period for this kind of project. In fact, I had this mostly finished and was using it well before I had the 6 channel one done.
The concept for this subwoofer amplifier was to build one that was capable of producing 1000 watts rms into a 2 ohm speaker load. Not that I thought I actually needed that much power, but it’s like that slick little sports car with the huge engine. And in fact it doesn’t put out quite that much with the transformer it has now, but it could, with a bigger power supply. As it is now with an 850VA transformer, the amp will easily put out in excess of 500 watts into a 4 ohm load.

I started by tracking down what I thought would be a suitable heat sink, and spaced out the output stage transistors on there to get an idea of the layout:

Unfortunately, I’ve lost the some of the original documentation for this amp, but I do have what I think is very close to the final schematic for this amp:

This is a typical class AB amplifier  with three stages: the input stage, the voltage amplification stage and the output stage. Obviously, the output stage dominates this amp and is set up in what is called a triple darlington arrangement, with a pre-driver pair, a driver pair and the 8 output pairs. Looking this over, I can only see one thing to add and that’s a pair of opposed diodes in parallel with R42. R42 lifts the input ground above the common ground to prevent ground loops (hum), and it may burn out without the diodes. See the the schematic for the 6 channel amp for an example (it’s R25 on that one).
Very much like the amp design for the 6 channel, I did this one also and made several changes along the way while building and testing it.

At one point I got the interesting idea to use the heat sink as the power rails for the amp, so I cut it in half:

and glued it back together with a thick piece of plastic in between as an insulator. I then fastened the transistors without isolators (mica washers) to each side and soldered on a 12 gauge wire to connect the base lead pin of each. The back of each transistor is bare metal and is connected to the collector, so it will get power directly from the heat sink:

The advantage of this is better heat conduction, but it does complicate the build since the heat sinks are now carrying a total of 140VDC (+70, -70).

Since this is a fairly small heat sink for so much power, I thought it would be prudent to build in some temperature controlled fans that would come on if things get too hot: 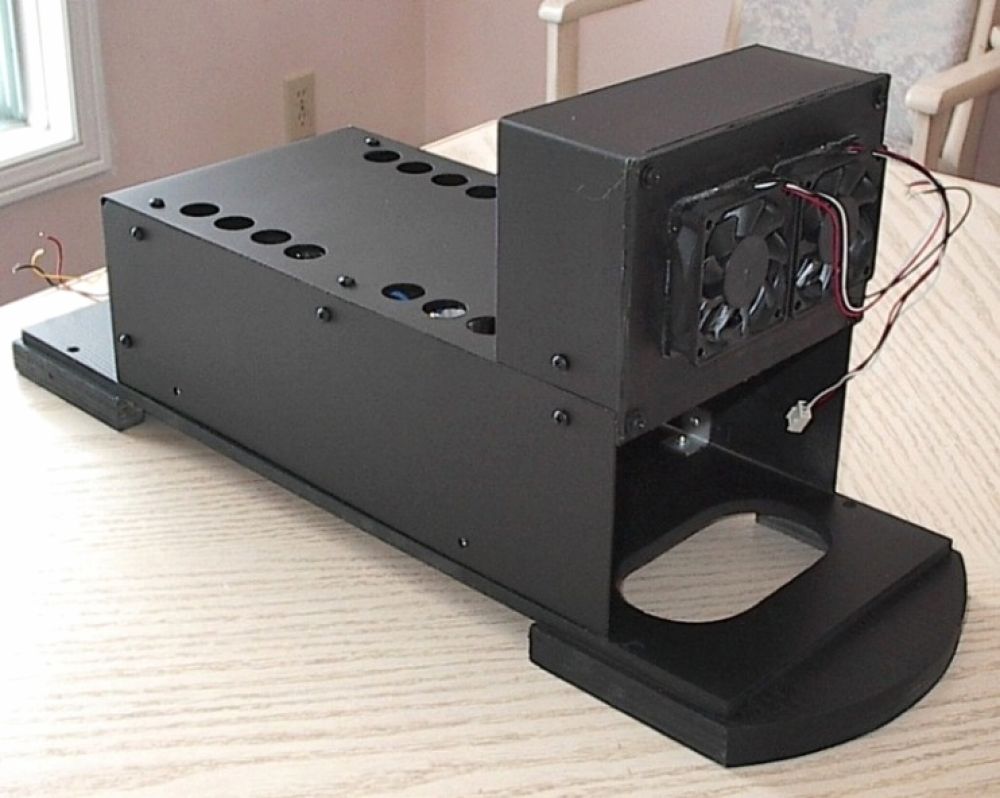 As it turned out, I didn’t need the two at the front and I later removed them. I retained the one at the back (red) and that runs constantly, but at a reduced voltage to slow it down.

The main cooling for the amp is what’s known as a chimney. The idea is that as the heat sink warms up, the heated air directly above it will rise up though these pipes and out through the top of the case, pulling in cool air from the bottom:

Sounds a bit farfetched, but believe me, it works. The pipes I used for this were actually cut from an old aluminum skimmer pole for a swimming pool. I mounted them in tight fitting holes in an aluminum plate at the bottom and a piece of plywood at the top:

I didn’t take any pictures while making the outer case. The idea was for it to look similar to a computer tower case (interesting, because at that time my computer was in an HTPC case I made that looks like a receiver). I made the bulk of it from 1/4″ thick hardboard and here I’m routing slots in the sides using a template and the laminate trimmer that I made the plunge base for:

Here’s a look at how I cut kerfs in the front to make it bend: 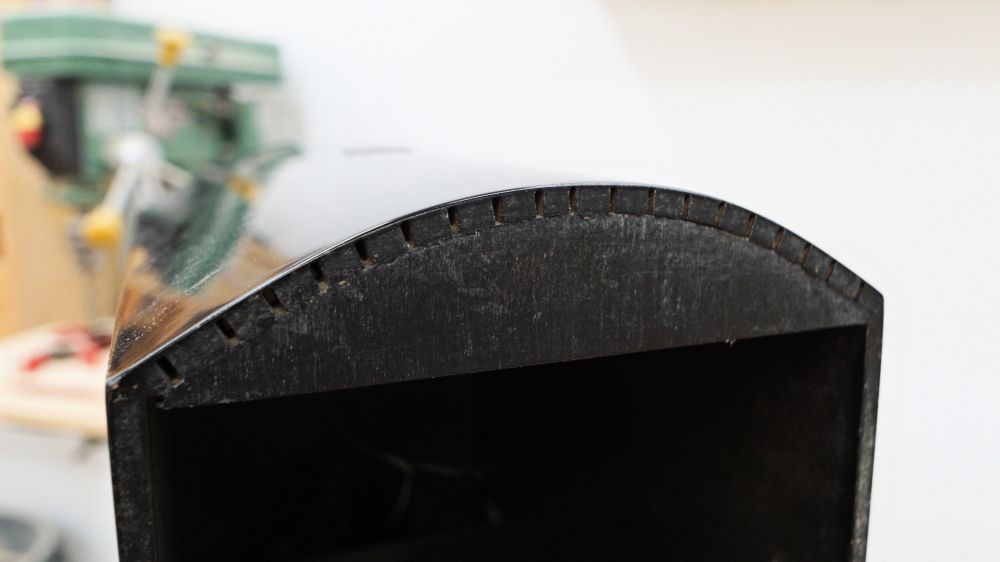 The finish is a high gloss black and to get that I sprayed on several coats of regular black rust paint. Here it is out on a bucket getting the final coats after cutting the slots:

After the paint dried, I sprayed on several coats of water based poly (gloss) and let that dry for several days before rubbing out the finish. I started with 1000 grit and worked up to 2000 grit before buffing it with polishing compound: 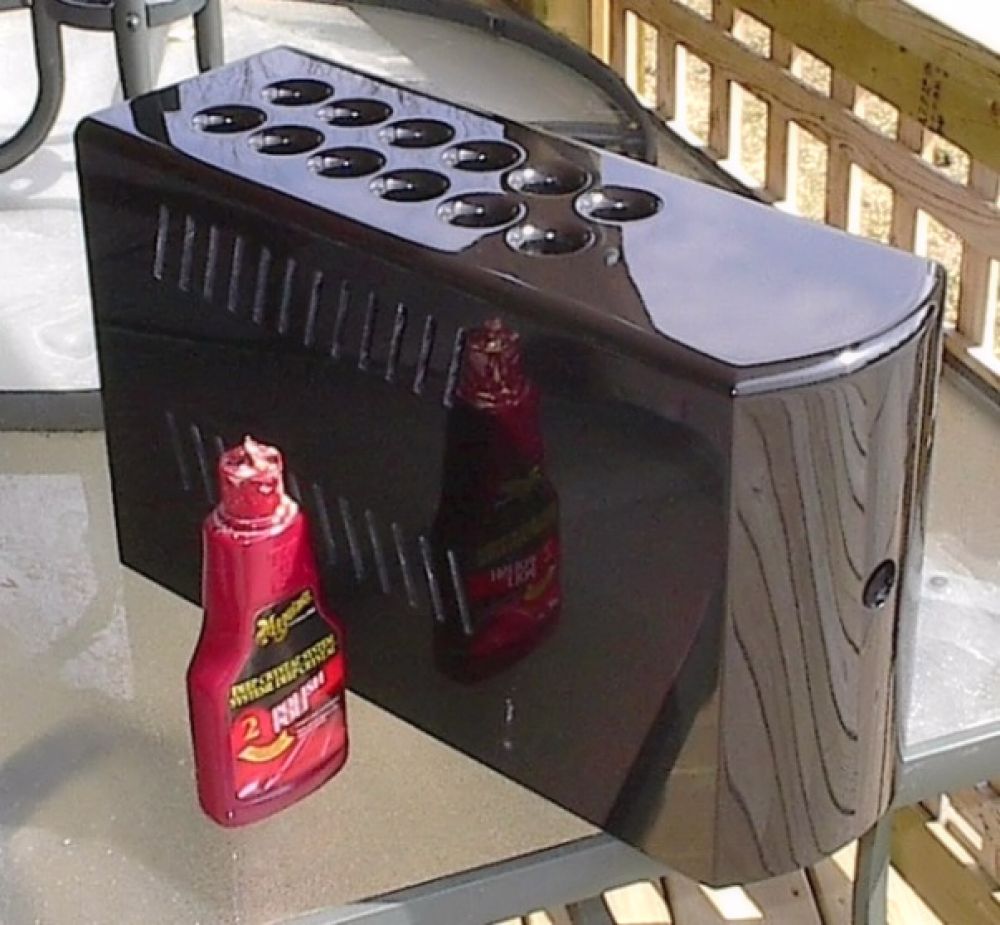 Not a great picture, but believe me – it was pretty darn shiny.

In the meantime, I was testing and debugging the amp design to make sure it ran stable. As impressive as the outer case looks, this is what took the vast majority of the time during this project:

I made the power switch using a regular switch mounted in this box with a plastic ring that lights up:

Assembled and running, sitting on top of the subwoofer it’s being used with, I’m checking how hot it is getting with the temperature probe on my multimeter:

The probe goes down through one of the chimney pipes to touch the heat sink inside.

Probably the best picture I have of it after it was (mostly) finished, back in 2009:

The outer case has sustained some scuffs and scratches from being moved around unprotected, and is just a bit dusty. But to the best of my knowledge the amp still works and I’ll be trying it out in the next week or so.

I made a video taking the amp apart to have a look inside:

And the put it back together in another video (warning: some “bad” words in this one):