Matthias Wandel gave me this pantorouter almost two years ago and apart from a day setting it up and trying it out for a few test joints, I haven’t had a project that it could be used with. However, at some point in the near or distant future, I’ll finally be getting around to making the frame and panel doors for my kitchen cabinets and would like to use it for that.

Like I said, I did spend some time setting the machine up after I got it back to my shop, but I ran into a few frustrations – mainly the lack of any kind of accurate indexing between the table where the stock will be clamped, and the template holder on the back. A horizontal centre line reference linking the two would be good and I started marking one out and proceeded with the test cuts I wanted for a video on joint strength. The joint strength video didn’t work out as planned, so I scrubbed the whole idea, thinking I would get back to it at a later date.

Fast forward to the present, nearly two years later and I still haven’t found the time (or inclination) to redo the joint test, but took out the machine to talk about in this video. And while it was out I got to thinking about it again, especially how the setup to use it can take longer than I would like (I want to get straight into making the parts without a lot of test cuts and adjustments). Anyway, I decided to make some changes to the machine, mainly to have it work on a one-to-one pattern instead of a larger pattern that the pantograph would follow. This would mean adding a follower pin at the back of the router that lines up with the cutter, and to do that I moved two of the cross struts (yellow arrows below) back:

I figured these were not adding a lot of strength to the frame at that location, so moving them out wouldn’t make that much of a difference.

I then made this part from solid maple:

It is fastened to those two struts and has the follower pin that I made from 3/8″ round bar. The pin matched the cutter diameter.

I also finished marking the centre line on the table and used a chisel to scratch it into the aluminum surface:

Nice to have a scale on either side as well, but I’ll save that for another time.

To fasten the new template holder, I took off the original metal frame (and the plunge lever) and bolted two blocks of maple down to the bed:

Even though these look like screws with that Philips head, they are 1/4″ bolts with nuts on the bottom to hold the block tightly so they won’t move.

I then screwed on a plywood frame to support the template:

The template is for 3/8″ mortise and tenon and the width is adjustable.

The pin rides in the slot to cut the mortise, then the template is flipped over and the tenon is cut. The tenon pattern is just slightly thicker than 3/8″ to make up for a slight overcut when routing the mortise. I attribute that over-cut to a slight flexing in the router holder frame. Not a big deal and easy to compensate for by increasing the pattern thickness by about 20 thousandths.

Also notice the centre line that I transferred from the table to the template. That allows me to line up the stock accurately on the horizontal plane, and to deal with the vertical, the top of the template holder is exactly 1″ below the table top. These two reference points can be used to accurately locate any cut I’d want to make using a different template.

A test cut, the tenon first:

And it’s a great fit in the mortise: 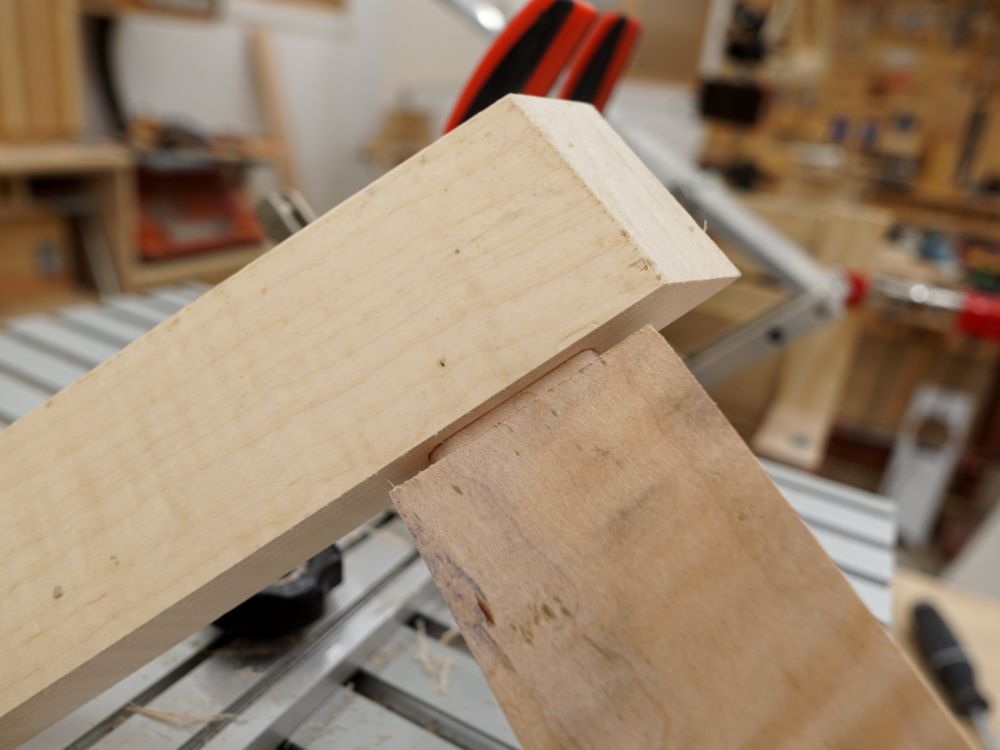 The joint lines up perfectly on the face:

I added bolts and knobs to hold the templates, but I’ll probably change that to a clamping system that a bit quicker:

I’ll keep the parts I removed, just in case I want to return it back to original:

But I don’t think that will happen. I prefer the machine as it is now – one-to-one saves time working out sizes for templates and the indexing system makes locating the cuts fast and easy.

I made a video showing the changes and using the machine to cut a joint: