I believe I first saw this type of clamp while watching Frank Howarth’s excellent woodworking videos, and immediately thought that these could be made from wood. Recently, I found the time to do that and that is the subject of this article.
First, credit where due – these are not my design, but are an adaptation of the original Kant Twist clamp. Mine are very similar, but don’t have the rotating clamp pads – I felt the clamp would work well for woodworking without them.

To start, here’s a video showing the build from start to finish:

After printing, confirm the template is correct by measuring between the points shown above, right. This should be 3-3/4″, give or take 1/8″ or so. Some variation is perfectly acceptable.

Next, I cut out all of the parts from the paper template and pasted them to the plywood:

I then cut them out roughly on the band saw. I need two each of the 1/4″ thick parts, and attached the parts I had just cut out back onto the plywood with pin nails. Double sided tape can also be used for this.

Then the parts are carefully cut out: 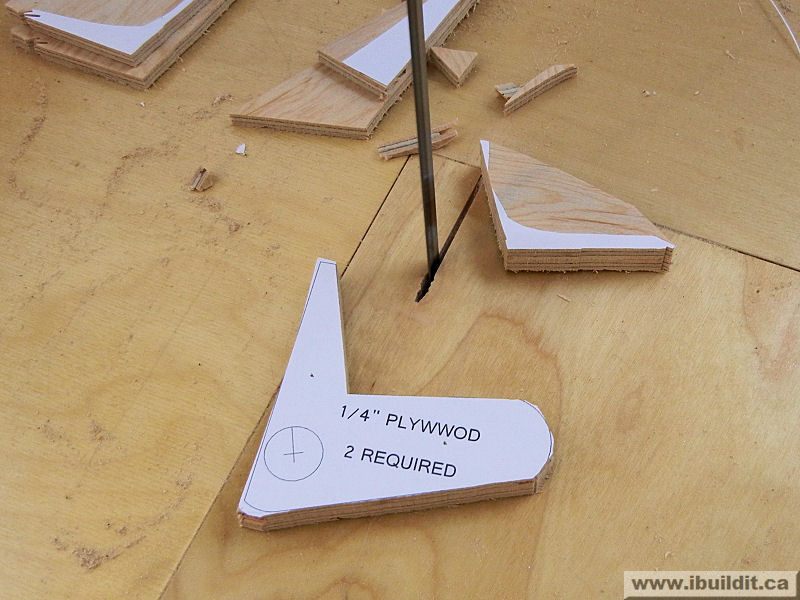 The parts after they have been cut out and fine tuned on the disk sander:

The next step is to very carefully drill the 3/4″ holes. After, the 1/4″ parts can be separated and the paper templates can be removed. I lightly sanded the face of each part to remove any of the remaining paper and glue stick residue.

There are several ways to do the next step, but I chose to use permanent thread locker to hold the regular nuts in place on the 3/8″ lead screw:

The dowel needs to be free to move, and the end nut needs to be right at the end of the threaded rod. Red thread locker cures fully in about 24 hours, but this can be sped up by heating the parts with a hair dryer.
Another option are plastic insert lock nuts, but I don’t think they have long term reliability for this type of application. Epoxy and an interference fit (crush the nuts slightly) is a better alternative.

Next I start assembly of the wooden parts by putting together the long jaw:

The centre dowel is glued in with equal amounts sticking out on each side.

After the glue set on the long jaw and the thread locker had cured on the lead screw, I start on final assembly: 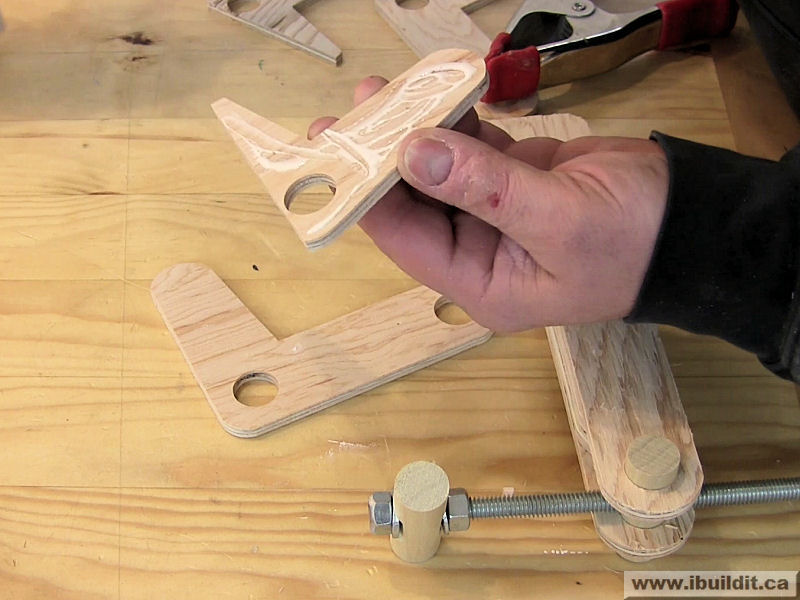 The short jaw is layered, being careful not to get any glue squeeze out on the pivoting dowels.

The short jaw is then clamped until the glue sets:

The handle is spruce, shaped on the disk sander and belt sander, and glued to the 3/8″ lead screw with epoxy.

Doing a test, they develop a lot of clamping force:

A number of people questioned the strength of the clamp, and in particular on the reliability of the threaded dowel, saying that it may strip out and that it would be better to use a metal threaded insert or embed a nut into the dowel. It’s not something that I would normally do, but in response to this I put the clamp to the test:

As shown, the centre hinge section of the clamp broke first, proving that is the weakest point. Further testing confirmed the threaded dowel is not a concern.

In this video, I break the clamp even further and go through what I did to make it stronger:

To increase the strength of the centre hinge, I replaced the 3/4″ dowel with a 1/2″ dowel, which leaves more ‘meat’ at the end of the short jaw: 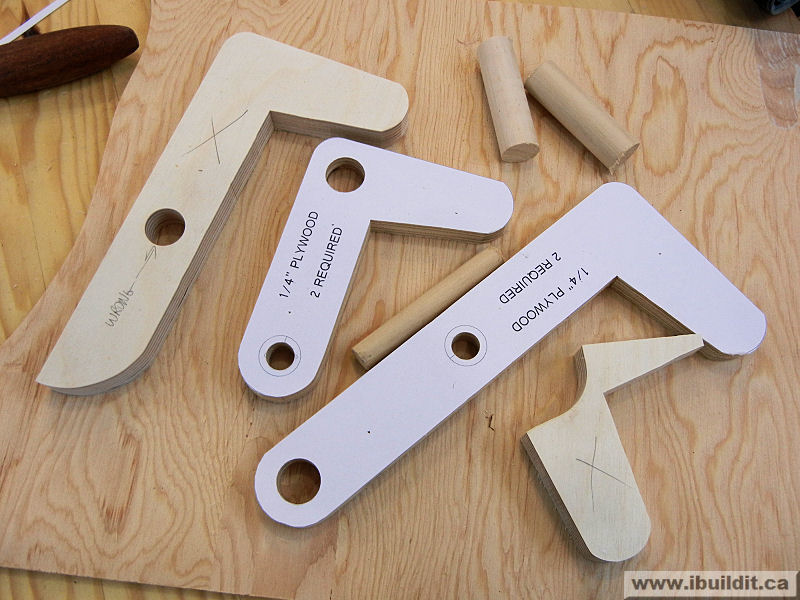 Note that the 3/4″ hole in the thicker plywood (marked “wrong”) should have been 1/2″. I drilled that without thinking. The 1/2″ dowel also needs to be longer, and I cut this one about 3″ long.

I then made 1/4″ plywood gussets to reinforce the key locations:

It now passes the strength test.

This was an interesting project and I’m very happy with how well these clamps perform. They develop an incredible amount of clamping pressure and are more lightweight and compact than they appear. I expect I will be using these ones a lot in upcoming projects.

Dustin Penner made an svg file to make the parts for this clamp on a CNC machine and sent it to me:

Thanks Dustin!
Dustin has a YouTube channel and makes some great projects.