A router table is a very handy addition to the workshop, especially if it has a dedicated router. Having to pull the machine to use free hand is bothersome and changing out face plates is tedious. I came to the conclusion that for the router table idea to work for me, the router would need to be permanently installed in the machine.
I’ve had a few over the years, most that I’d built and one that was a gift – a Craftsman tabletop model that, for the sake of politeness, I’ll say nothing about here.
The problem with the ones I’ve had in the past is that they did not have a lift to quickly adjust the cutter height. Another inconvenience was that you would have to remove the machine from the table to change bits. Although these may seem like minor issues to some, they are virtual deal breakers for me: if it isn’t easy and quick to set up and change, I’m not going to be using it.

So, knowing this I did some research and my first resource was the router table that was featured on The New Yankee Workshop. This has elements that I really liked but what it didn’t have was a lift mechanism. Further digging and I found Woodgears.ca – Matthias Wandel’s lift mechanism seemed to be just what I needed. A marriage of the two was the answer.

First, I built the lift: 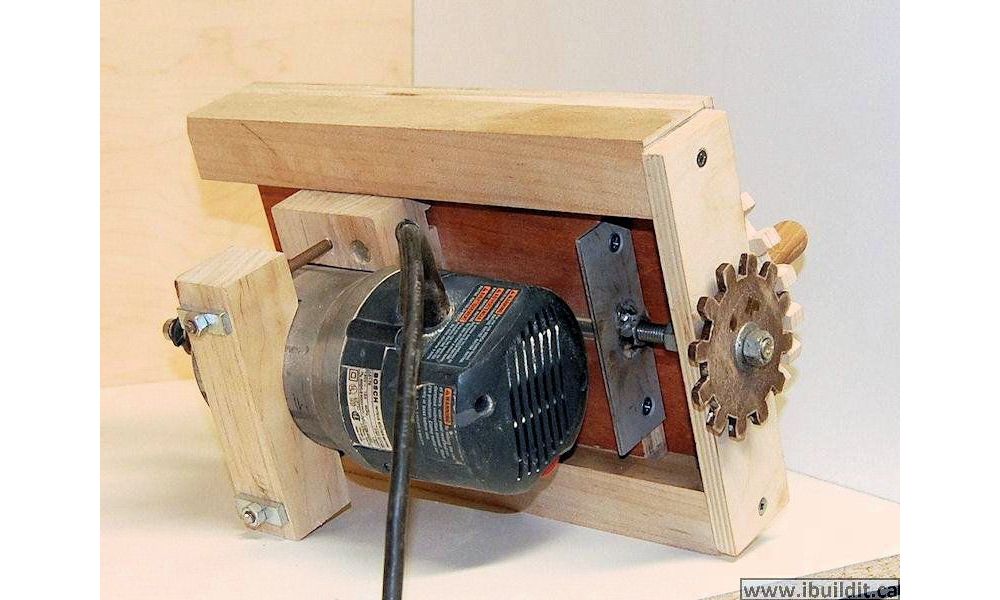 The unit is compact and fully self contained, needing only to be attached to the support structure of the router table. Having run out of Baltic birch plywood, I had to make the bottom gear from 1/4″ hardboard. I submerged it in thinned urethane overnight and after letting it dry for a full day, it had the consistency of tough plastic. Indeed, this gear has stood the test of time – nearly 3 years and many rotations later it shows no sign of wear. These were the first gears I ever made and I laid them both out using Matthias’ Gear Template Generator and very carefully made the cuts on my table saw.
The clamps that hold the router body were “cove cut“ on the table saw to the exact radius of the body, then bolted in place with 1/4″-20 threaded rod.
I adapted Matthias’ design but the basic functionality is the same: 2 gears, the one on the front has a crank handle and drives the one on the bottom. The bottom gear turns a threaded rod which raises and lowers the router. Here, I used a ratio of 1:2, so for every full turn of the front gear, the router would raise or lower 1/8″. Good for quickly moving up or down but still precise enough for fractional cuts.

Two hand screws lock the mechanism after the adjustment is made: 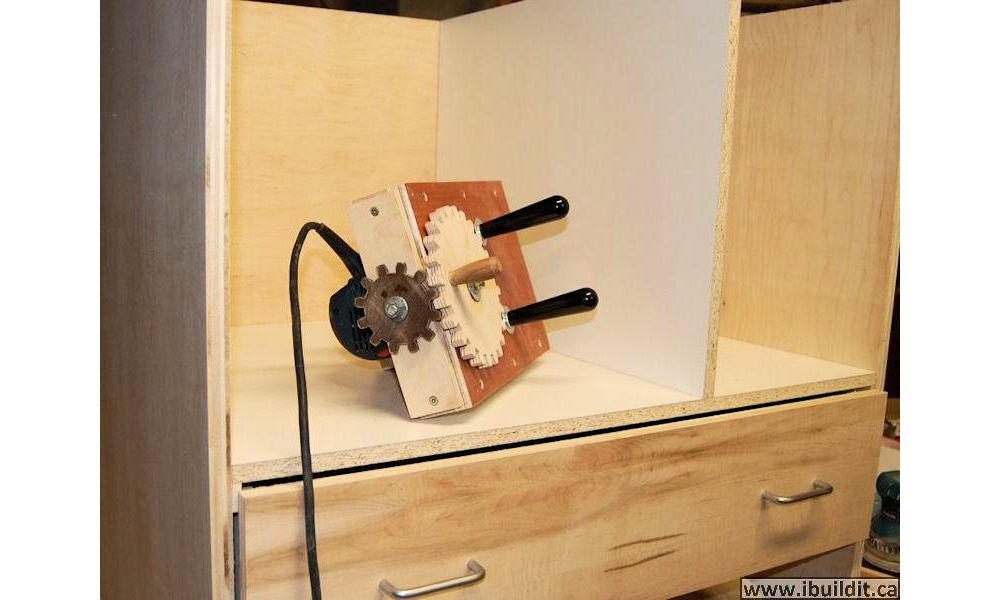 With the lift made, I moved on to the table itself: 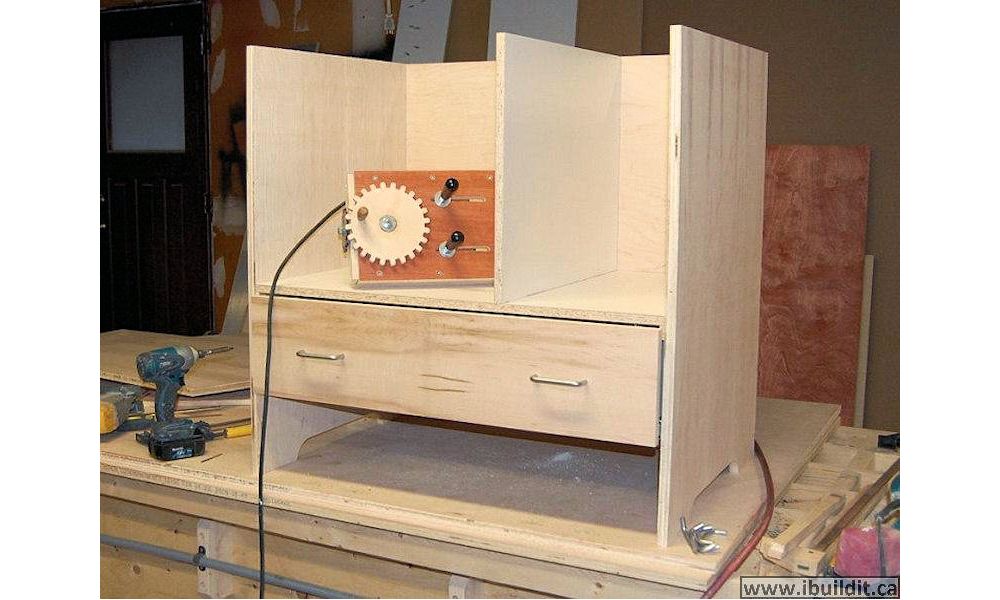 Basic construction is 3/4″ maple plywood for the outer panels, 5/8″ melamine for the interior. All of the joints are just glued and nailed butt joints.
The drawer was already built, left over from another unrelated project. Since it was nearly exactly the right size, I adjusted the cabinet width to fit it.

Mounting the router lift was a matter of screwing it in place to the main divider and adding structure around it to adequately support it: 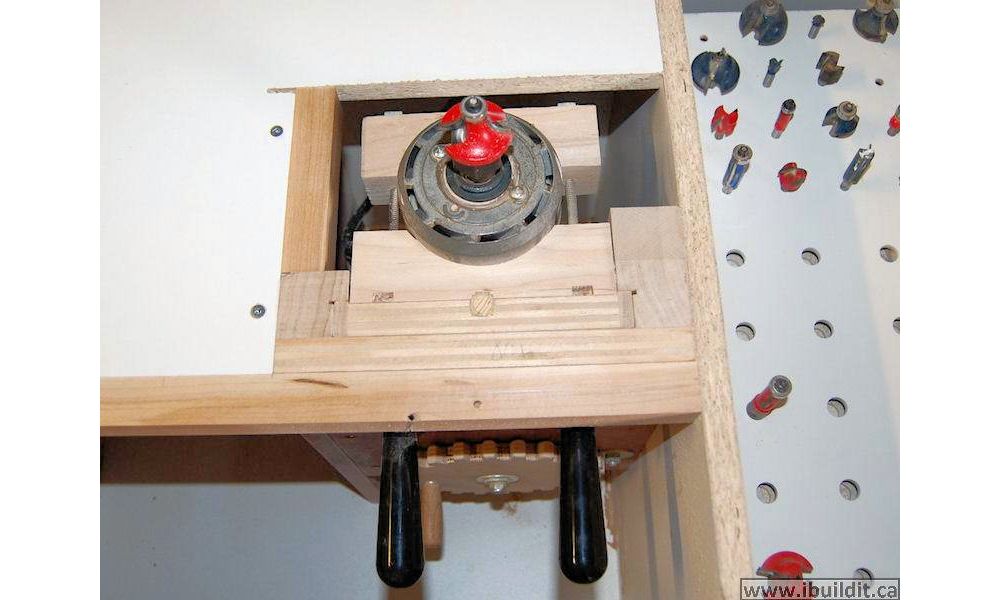 The space behind is the dust collection plenum, that links the area under the router with the feed from the fence, above the table. This scheme works well, removing nearly all of the dust produced during operation: 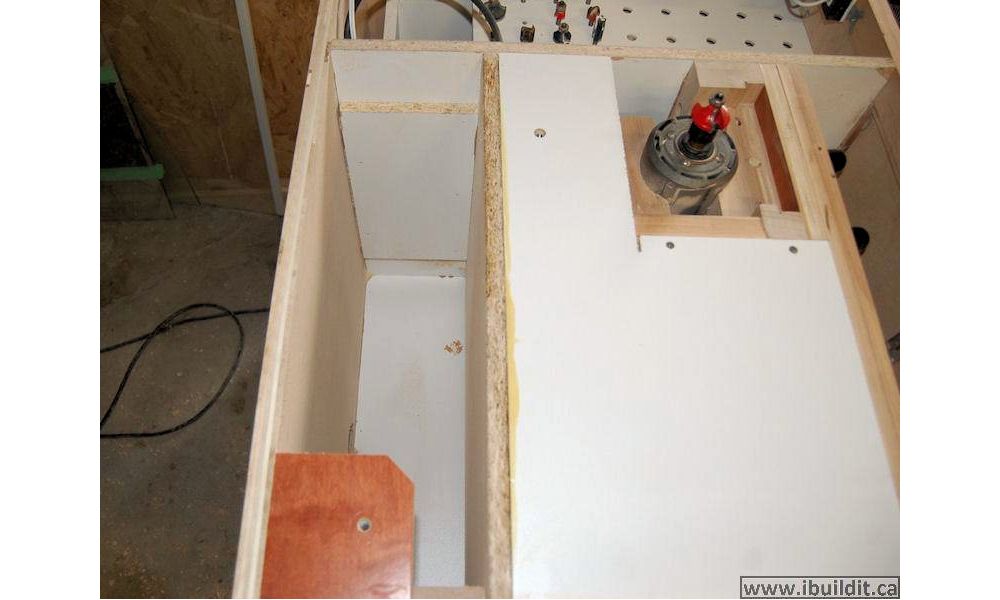 It’s always good if the things that you need for the normal operation of a machine are close at hand. Router bits, wrenches, guides, jigs and the like should be within easy reach, preferably stored in the tool cabinet itself. To that end, I made this router table with what I figured to be more than enough storage.

A large pull out tray for router bits and 2 smaller drawers are on the right, with the large drawer at the bottom: 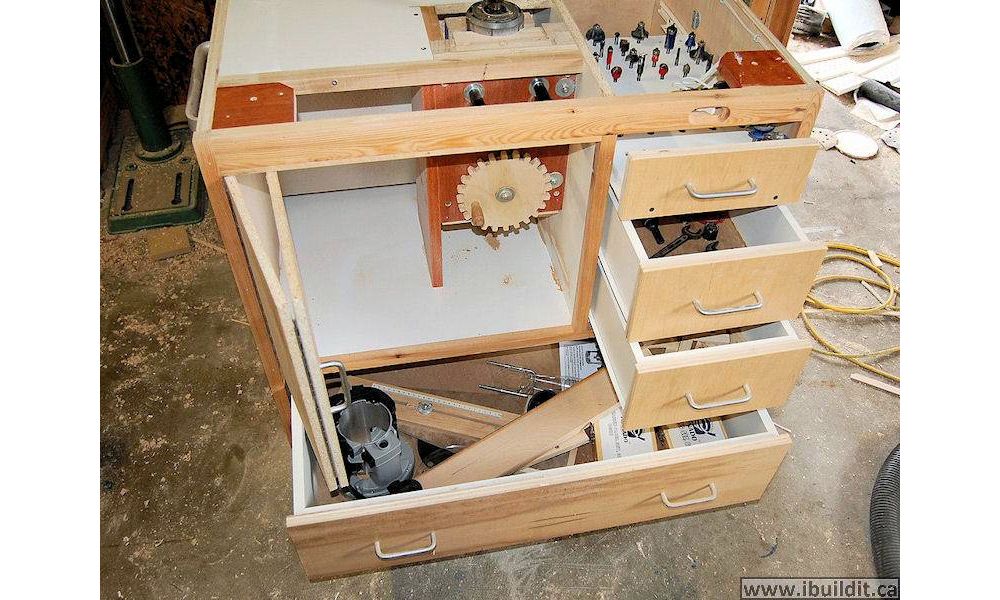 At this time though, I have more bits than will fit in the tray. What I will probably end up doing is converting the next drawer down into a tray as well.
The bottom drawer is filled – finger boards, bit sets, jigs and the fixed base for my hand-held router are kept in there.
The router compartment is closed off with a bifold door. I didn’t like the pull out panel idea from The New Yankee Workshop version, knowing I’d eventually misplace that. I meant to drill some holes in the bifold door to balance airflow between the fence and the lower chamber but I haven’t done so yet.

Seen here, I’ve put a narrow face frame on the front to cover the edges of the plywood and bridge across the top of the cabinet: 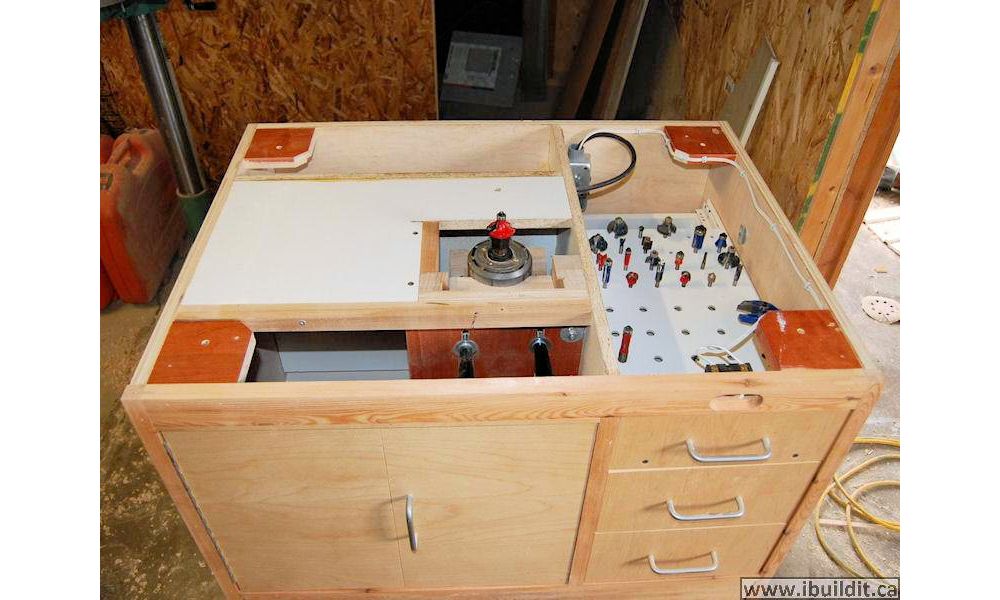 The top member houses the recessed on/off switch, above the router bit tray on the right. Having the switch this way prevents accidental starts but also makes it slightly awkward to turn on and off. The power cord enters the back of the cabinet and I also put an outlet there for convenience. The router itself is wired direct – I cut the power cord short. I used the part I cut off (with the plug on the end) on another project, my disk sander. 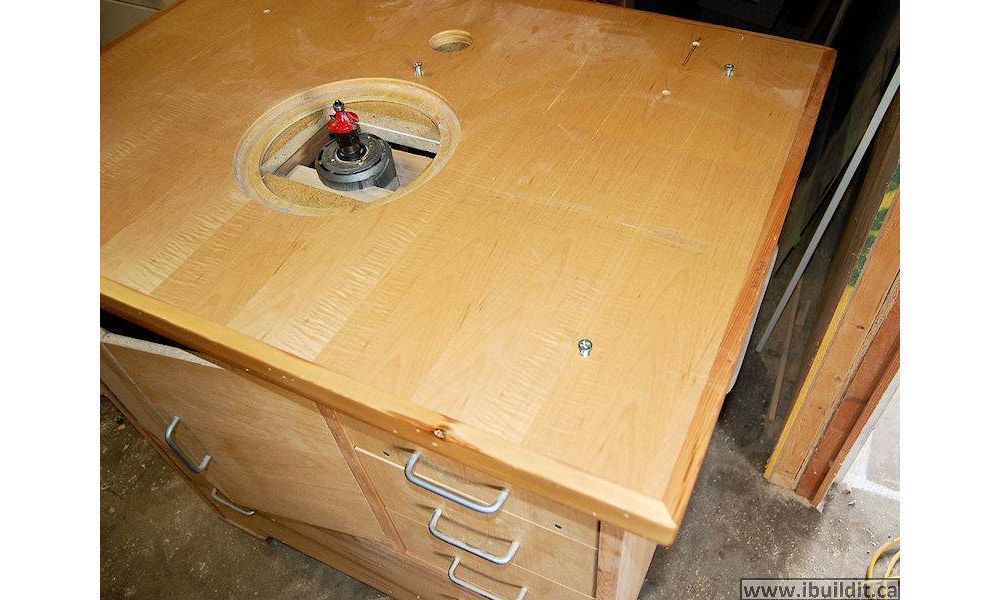 The insert is perfectly round and has a pin at the back to hold it in place: 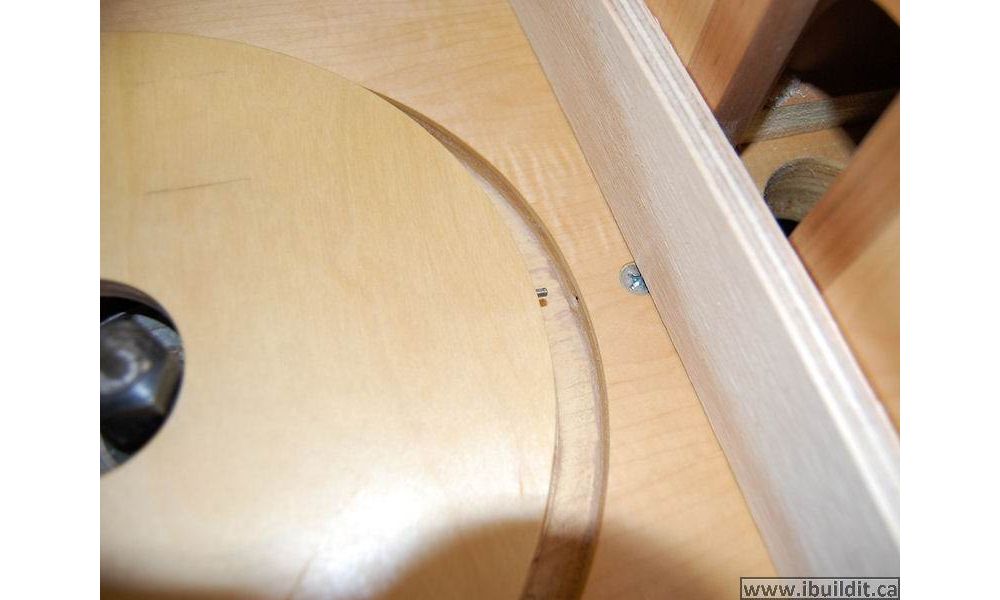 And a magnet at the front to keep it from lifting up when the router is on. 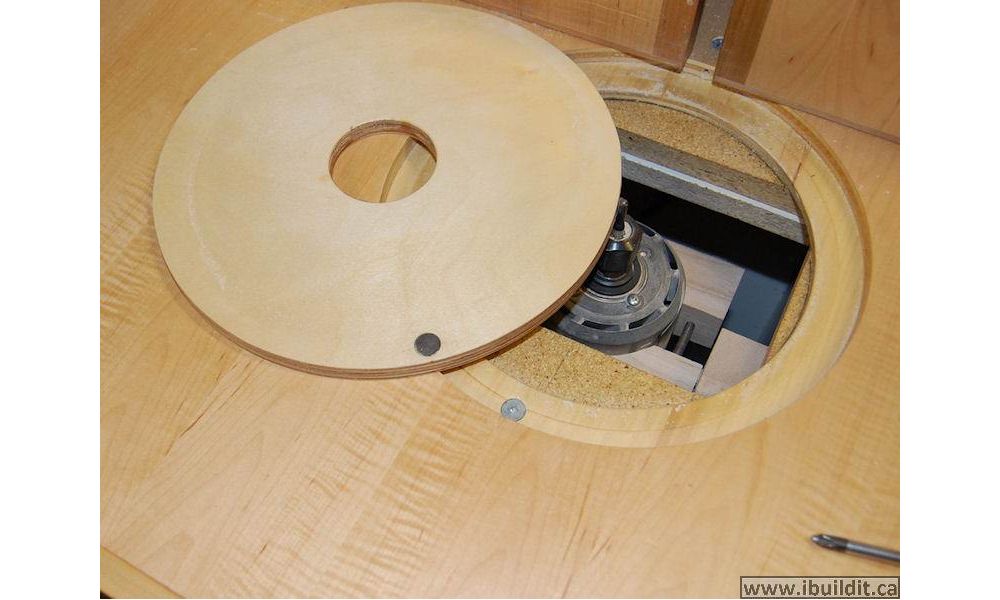 The magnet is glued into a recess and is attracted to the large head of the steel screw. This holds the insert down against the fan exhaust from the router. This insert has a 2-1/4″ hole and is good for most of the bits I use. If I need a larger hole, for example a panel raising bit, I’ll make a new insert to accommodate it.

The fence construction draws heavily on the New Yankee design, with many similarities. Made from 3/4″ plywood with some solid wood edging, it clamps to the top via a pair of hand screws, making it quick and easy to set and adjust. The hefty centre section is higher, to accommodate hold down feather boards and other jigs. The two fronts are movable, to close the gap at the throat when needed and also handy for indicating the leading and trailing edge of the cutter: 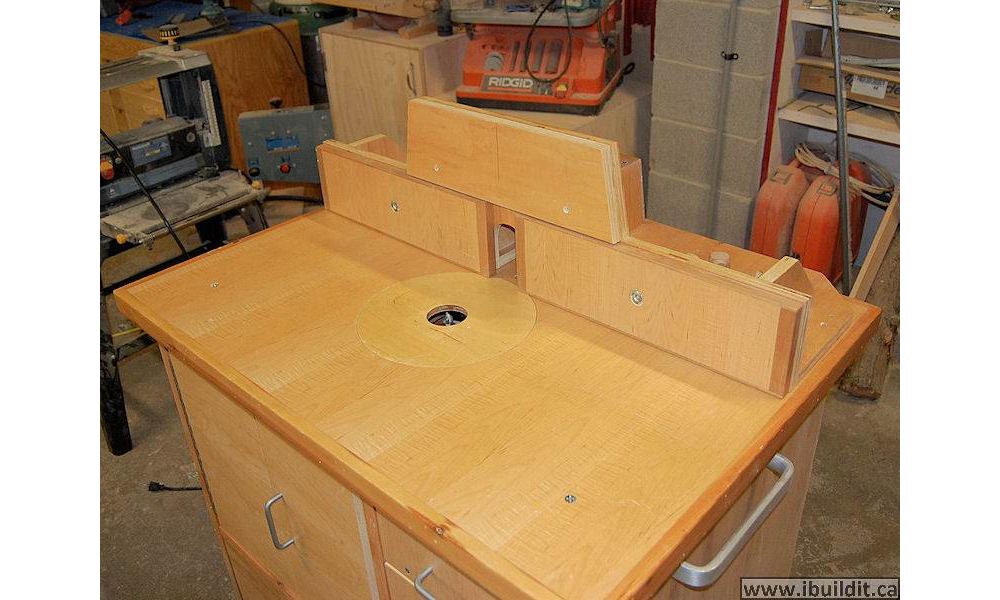 The homemade hand screw goes through the back and into a t-nut mounted in the front. It is also possible to shim the out feed side outwards slightly, to use the router as a jointer: 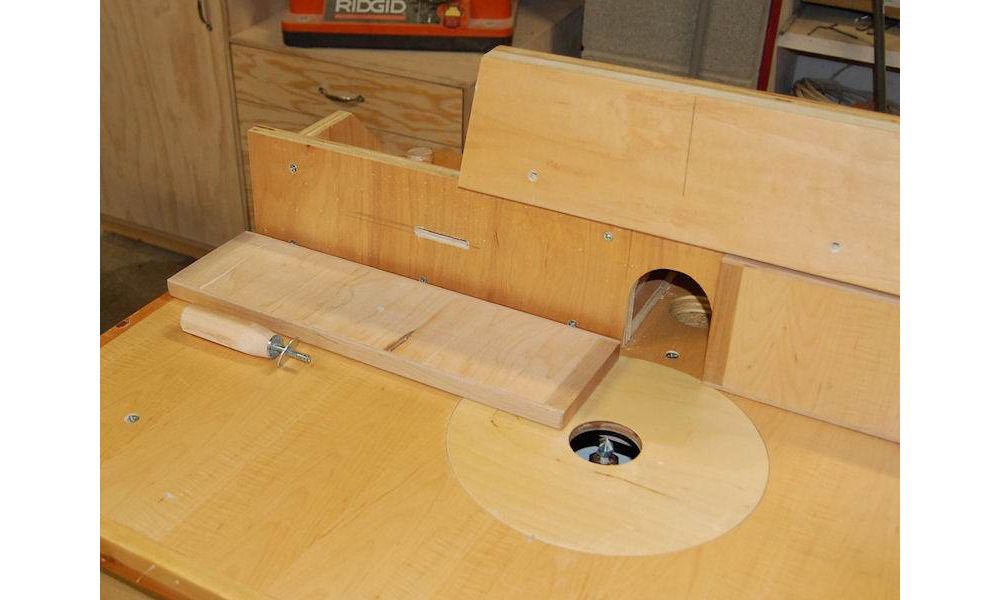 The fence has a duct (the box in the middle of the rear of the fence) that connects the dust collection plenum in the cabinet with the throat of the fence: 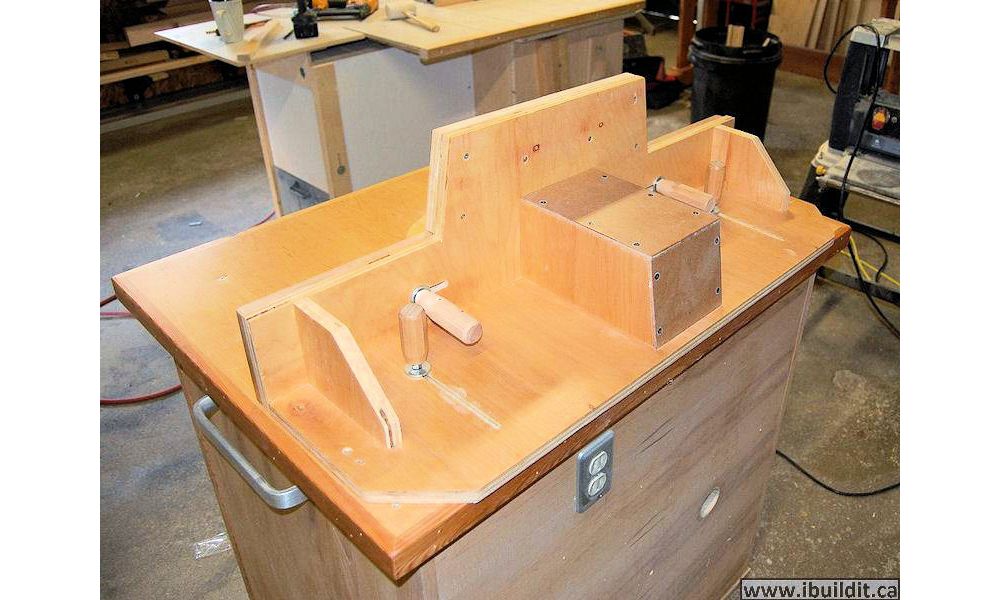 This allows for the collection of dust from the top as well as underneath. Also seen in the photo above is the 2-1/2″ dust collection connection hole at the back of the cabinet: 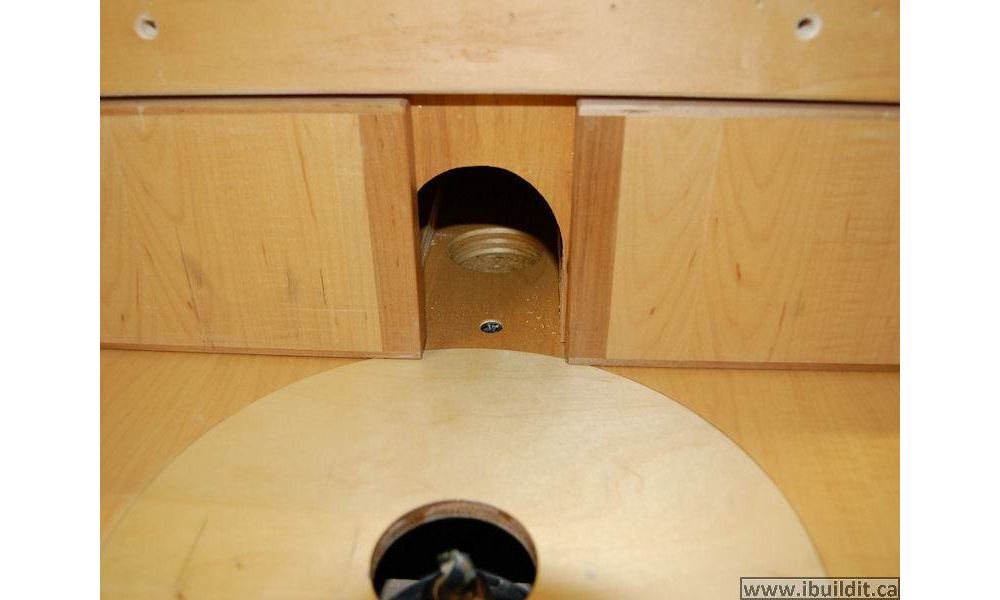 Dust collection is very good for all tasks, with very little building up in the cabinet. By changing the collection pipe from 2-1/2″ to 4″, I could improve the performance and I will do that in a future upgrade.

This project has proven to be one of the most useful I have done, seeing action almost every day. Its ease of use, convenience and versatility are what make it a very worthwhile addition to the workshop. It’s the all-in-one station for routing, both table mounted and hand held, with everything within easy reach. Indeed, if I had it to do over, there’s very little I’d change about the design. 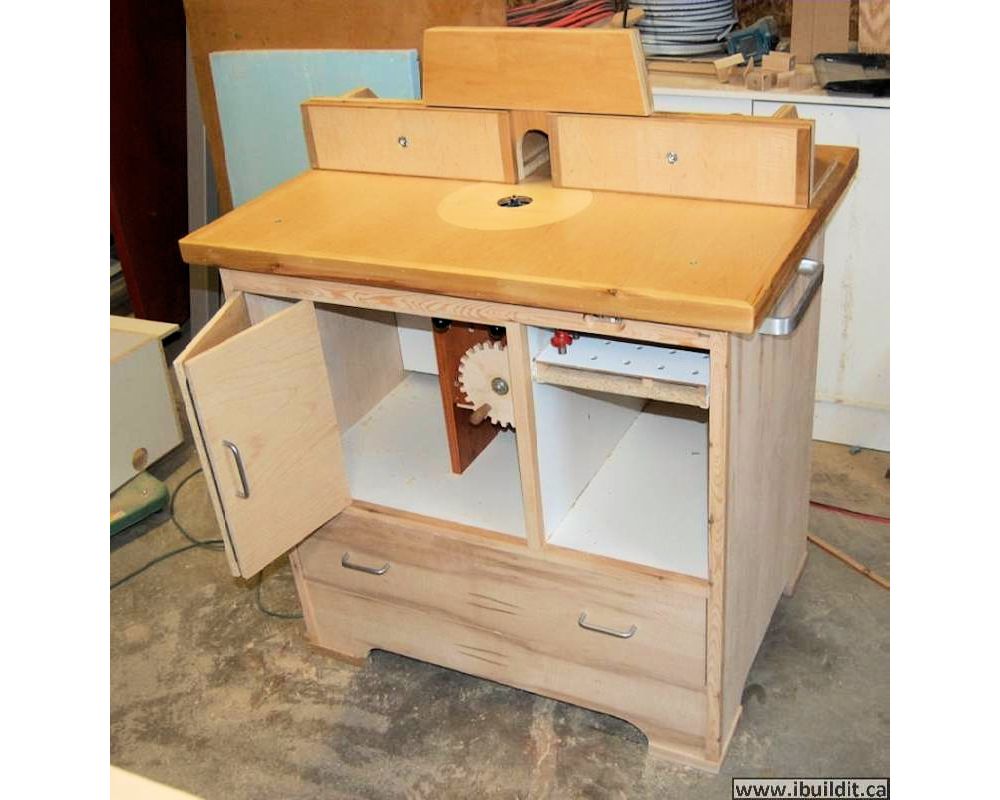