I had just changed the knives on my planer, since the old ones (the original set that I had already sharpened twice using this sharpening jig) had a few too many deep nicks. They were still relatively sharp, though, and the steel they are made from is very good, so I thought about how I could reuse them. They are thick enough and wide enough to make a small knife from, but the mounting holes would be a problem. I may still use one for that, something with a short blade like a marking knife or a carving knife could avoid the holes in the blade and make use of them for the handle.
I also thought that the blades would make a great scraper, a tool that I use fairly often in my shop. Best of all, the holes could be used to attach the blade to the handle, making it perfect for this purpose.

Here’s one of the blades. The holes are in sets of two that are evenly spaced and big enough for a 1/4″ bolt to pass through:

I want to model it after the standard paint scraper, so I used that as a pattern and cut the handle out of a piece of solid maple: 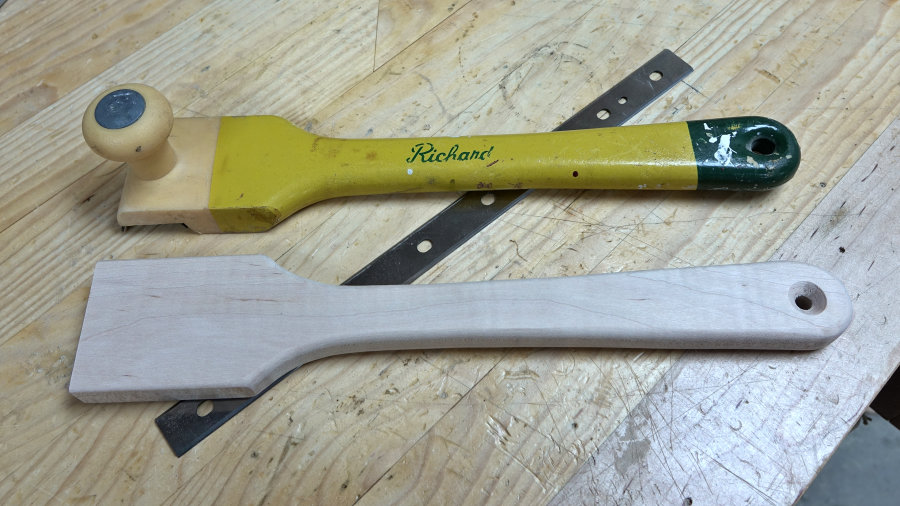 To attach the blade, I wanted to use 1/4″ hanger bolts, so I set up a clamping jig on my drill press to hold the part vertically off the table to drill the holes:

The holes need to be offset toward the bottom. This increases the amount of exposed cutter on the bottom, and also keeps the edge on the upper side flush with the top of the handle, making it less of a hazard while using the tool.

I installed the bolts using construction adhesive to help anchor them in, as well as lubricate, to make driving them in easier. You can see here the offset I mentioned above:

Since the blade will be under a lot of force while using the tool, I think that the hanger bolts are the best way to fasten it to the handle. Another option would be threaded inserts and bolts, with the inserts glued in with epoxy. Regular wood screws may work, but will likely loosen over time. Also threading the wood with a tap is possible, but can strip out in the end grain. Wooden threads work best when cut across the grain.

The knob is an important part of the scraper – it gives control and allows you to apply more pressure right where it’s needed. Instead of turning it on a lathe, I made mine flat from the same stock I cut the handle from. I did make it a bit wider and roughly sketched it out before cutting it on the band saw: 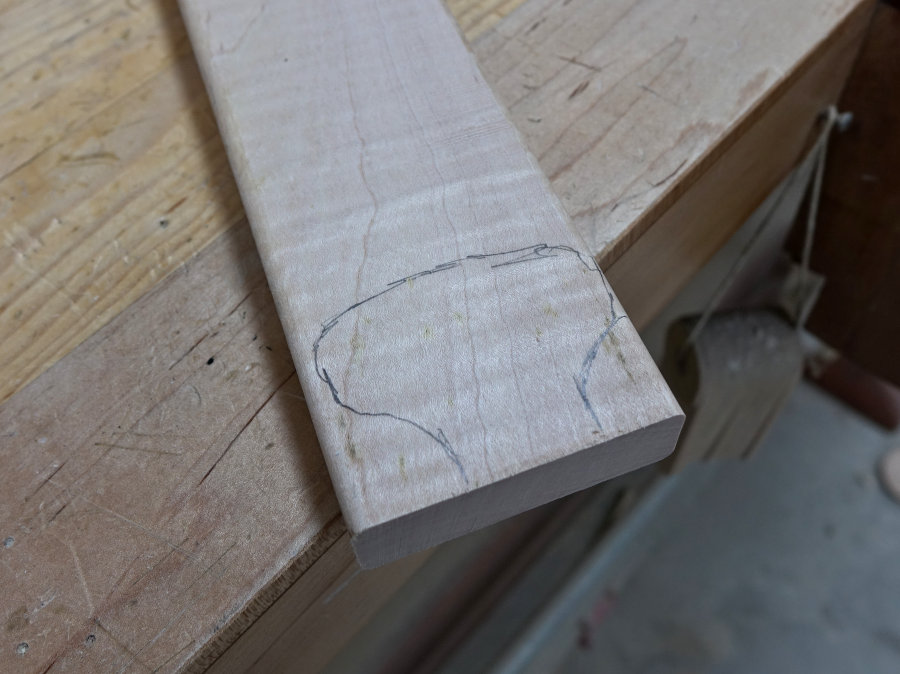 Like the blade, the scraper is subject to a lot of force, so I solidly attached it to the handle using a 1/4″ bolt and glue. I also coated the bolt with construction adhesive to glue it into the knob: 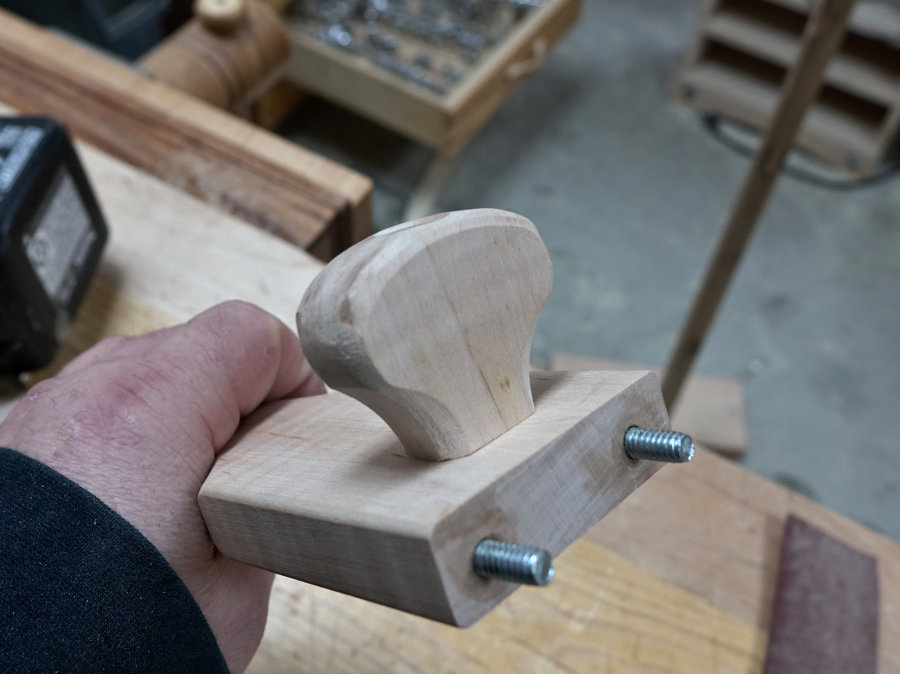 On the underside of the handle I drilled a counterbore to recess the nut and washer:

Fully assembled with the blade installed. I was able to get four blades from the single planer knife, so I’ll likely never run out of blades again. These can be sharpened over and over, and if you are particularly absent minded or accident prone, you can always blunt the top edge on the blade to avoid trimming your nails with it. Losing that extra edge won’t be a big deal when you have three more spares: 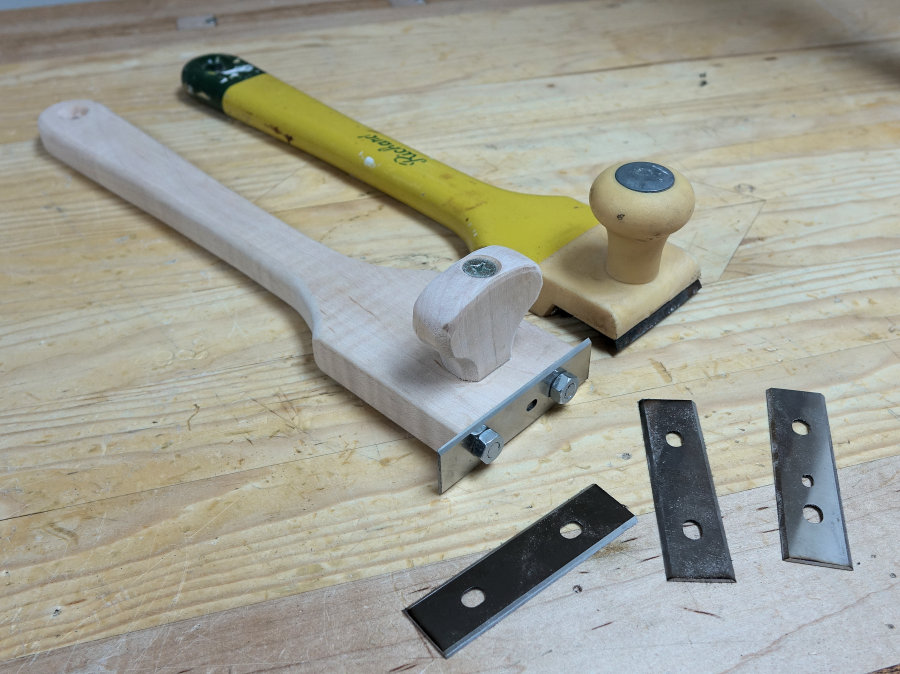 To finish the scraper, I stained it a darker colour, which I really didn’t like; then painted the knob red, which I did like:

I also branded the “I Build It.ca” into the handle. It took several tries to get that right and the result was less than perfect, but still looks pretty neat: 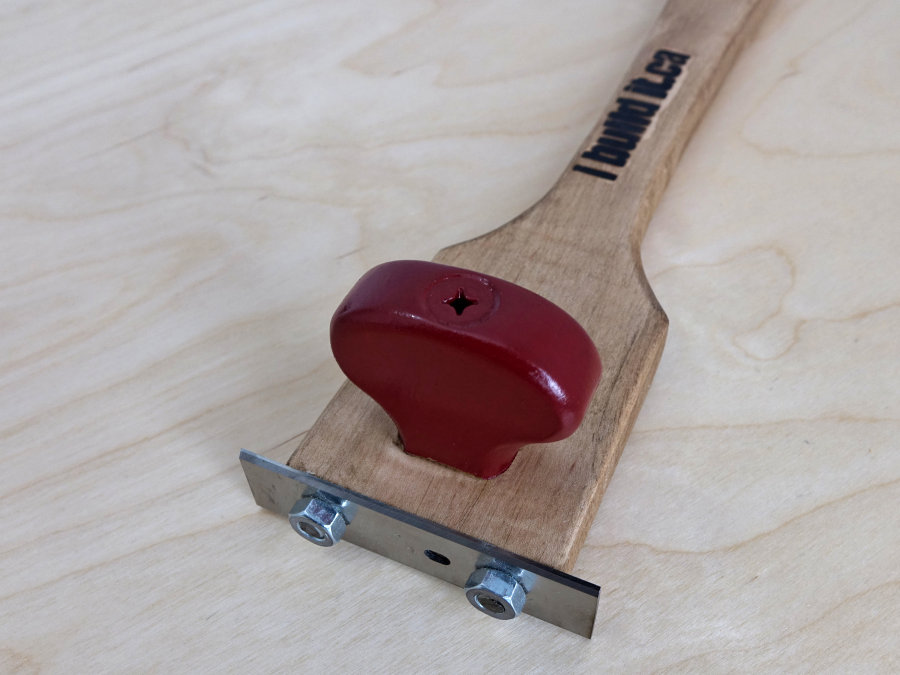 And about 1/4″ of the blade should be sticking down on the bottom. This will become less as the blade is resharpened, but given the quality of the steel used, should still last a good long time:

Here is the full build video: