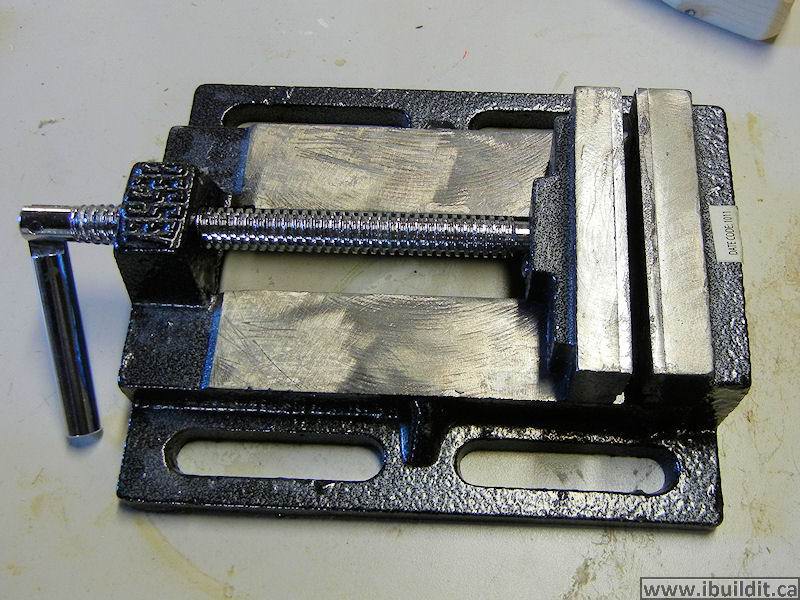 Shortly after unpacking it from the box it came in, I was preparing to put it back, to return it for a refund. Of course, stupidly (again), I didn’t.
Maybe my expectations are too high, but I think that regardless of the price, a finished retail product of this type should be usable immediately, and not require the better part of an hour to clean it up and make it work. I’ll elaborate: The vise was completely coated with a thick, hard film, similar to urethane. This coating was applied liberally and on every part of the vise. I’d guess this is for rust prevention during shipping from Asia and storage. In any case, it had fully seized the vise and I couldn’t turn the screw with my bare hand. The moving jaw was glued in place and I had to hit it with a hammer to free it enough to move.
I scraped the ways clean on the top, inside and bottom before it would move smoothly. Even then, it would only close 90% of the way, and to fix this I had to file each side of the ways near the fixed jaw to clean up the rough casting.
I found this to be ridiculous and thought that I could expend nearly this much effort in making my own, rather than finishing someone else’s job.
So, that’s what I did.

I made a video showing the finished vise:

I cut the threaded part, complete with the main screw, free with a zipcut blade on the grinder.

I then did some on-the-fly planning, to get an idea on how it would go together and how big the parts needed to be. I cut two blocks of maple, one for the fixed jaw and one for the moving jaw. To attach the pad of the mutilated clamp to the moving jaw, I drilled a shallow recess the same diameter as the pad. The pad would be glued into this with epoxy:

To mount the threaded part of the clamp in the end block, I had to remove the handle by grinding it down enough for it to slip off:

The end block is drilled out to receive it. Some extra cutting had to be done with a chisel for it to fit: 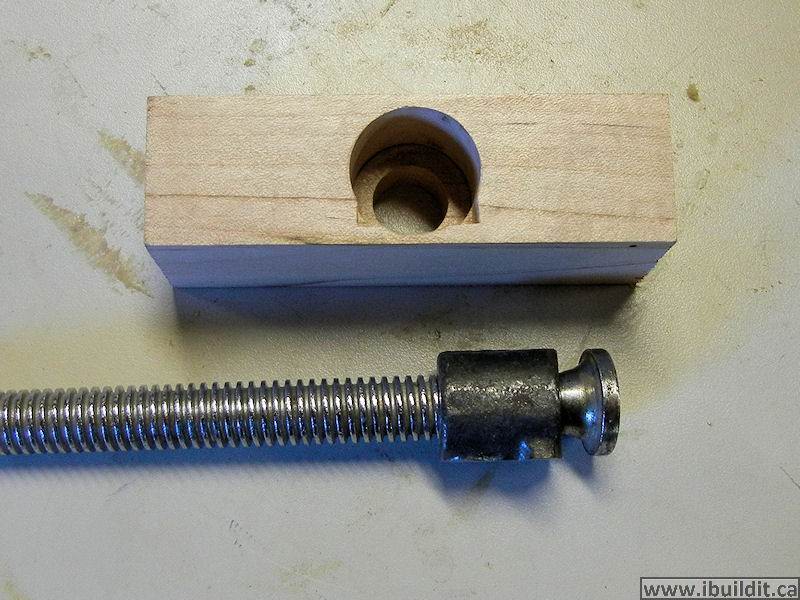 To provide a good key for the glue to grip, shallow cuts are made with the zipcut blade:

And the part is glued in. I’m using polyurethane construction adhesive, but any high strength glue that is suitable for bonding metal will do.

The base is slotted for the moving jaw retainer. In this photo, I had not gone deep enough. I fixed it before the next photo, where the first way is being glued in place:

While that was drying, I glued the guide block to the moving jaw:

And used it as a spacer to glue on the other one.

The final operation for the first day is to glue the clamp pad to the moving jaw:

I’m using the wooden bar clamp to push the pad into the recess firmly. I used slow set epoxy to glue the pad in, and this will be more than strong enough – no other fastener is required.
The parts are left overnight to allow the glue to cure.

The next day the end block is glued to the base assembly:

I missed a filler and just cut a piece of spruce and slipped it in. Not an overly critical area, so the softwood will work fine.

The moving jaw retainer is screwed in place and the ways are lubricated with petroleum jelly:

Cross grain gluing on pieces that are not wide enough to be overly affected by seasonal expansion / contraction cycles can be very strong, but I added 2″ screws to the end block and fix jaw just to be on the safe side.

The handle is put back and its end flattened so it won’t come out:

Some sanding and I mask out the parts I don’t want paint on.

Yellow is highly visible and besides, I have a can of this colour anyway:

After it was painted, I came up with a clamping system that had me drilling 1/2″ counterbores in the base. It’s nice to think of everything before final paint, but not a big deal to touch this up.

They are cut short so that the top is not above the ways when it’s holding the vise down. Plywood blocks are made with holes through. These work to keep the hook bolt vertical.

Here’s the best way I know of reaming out a washer to a bigger size. The vise grips hold it firmly and the step drill cuts, but not aggressively. Never fails:

The 1/2″ nut from the hook bolt is mounted in a wooden handle. The hex shape is cut with a sharp chisel after the majority of the recess was drilled away.

More of the polyurethane construction adhesive.

A nice little project, easily finished in a couple of days. I’ll use this one for wooden parts and retain the cast iron one for metal work. I can use the clamps on either one.

This one cost me almost nothing and was infinitely less frustrating than cleaning up a new factory made unit. Too bad I hadn’t thought of it before buying the other one.

UPDATE: Seven years later and I’ve used the vise many times on a countless number of projects. It’s still working great, but one issue I’ve had with it is the solid wood parts will swell when the humidity goes up during the spring and summer, and that causes it to bind slightly. Given that I didn’t make a build video for the original, I thought I would remake the vise for that, and also change the design to make it easier to build and less prone to seasonal moisture changes.

Making all of the parts that slide back and forth to guide the moving jaw from plywood will solve the binding problem, and also simplify the construction. On the original, the “ways” were seperate strips of solid hardwood fastened on top of the plywood base, and the new design gets rid of those altogether.

I also replace the old C-clamp for a threaded rod / t-nut combination with a straight clamp style handle. I found the T handle on the original would get in the way after the vise was tightened. And I don’t think I’ve ever used the vise where I need more leverage than the straight handle can provide.

I made a SketchUp model for the new design and it’s free to download here:

As with most of the free plans, this is a simple SketchUp model and you’ll need to have that program installed on your device to work with it. SketchUp is a free program.

And here is the build video for the new vise: