Blog: Making A Preamp For An Accelerometer By: John Heisz

I made a wooden project box n my last entry and in this one I’ll build the preamp that goes in it. The preamp is for an accelerometer – the ACH-01 – that’s used to measure vibrations. Good and bad.
The accelerometer is a small block of plastic with a sensor inside and you fasten that to whatever you want to measure, like the side of a speaker:

It will measure how much the panel is moving while the speaker is playing and at what frequencies. The goal for speaker building is to make a box that doesn’t vibrate enough to be audible.

Initially, I want it to measure how much the wall panels in my basement move. Opposite from a speaker, I want them to move and in doing so absorb some of the sound energy in the room. In particular bass energy. Or that’s the idea, anyway, and the accelerometer will tell me if this actually happening and at what frequencies.

As it turns out, the box I built is just barely big enough. I need to fit two 9 volt batteries inside plus a small circuit board for the preamp:

First mistakes were cutting the perf board too small and the way I devised to hold it in. Rather than simple screws, I went with slots cut into wooden pieces that are glued in, eating up more space inside the box. The switch is the first component – a small DPDT to cut off both batteries at once:

I had to cut slots in the board for the bigger pin spacing on the switch.

Here you can see the board holding slot idea and how I had to move the screw after I put the switch in:

The block on that side is supposed to be removable so that the board can be put in with the front panel. The front panel would have a hole for the switch to stick out. Spoiler: this didn’t work.

Next I soldered on the rest of the parts, starting with the op amp. I’m using the leads from the parts to form the board traces and then cutting off the excess:

It might be a good time to show the schematic I’m working from:

Not especially complex, it powers the FET inside the accelerometer that acts as a buffer (I think… I’m not an expert) and then boosts the signal by 10X. I did switch the op amp to one I already had – the LM6132, which has similar specs but works well running from batteries. Not that battery drain will be a major problem. This will be used occasionally and for minutes at a time.

The finished and working on the first try (!) board connected to the two batteries:

The output wire is connected directly to the board. It’s just a stereo 3.5mm jack that plugs into the sound card on a computer. The accelerometer connects with a plug and I soldered the pins into the board. 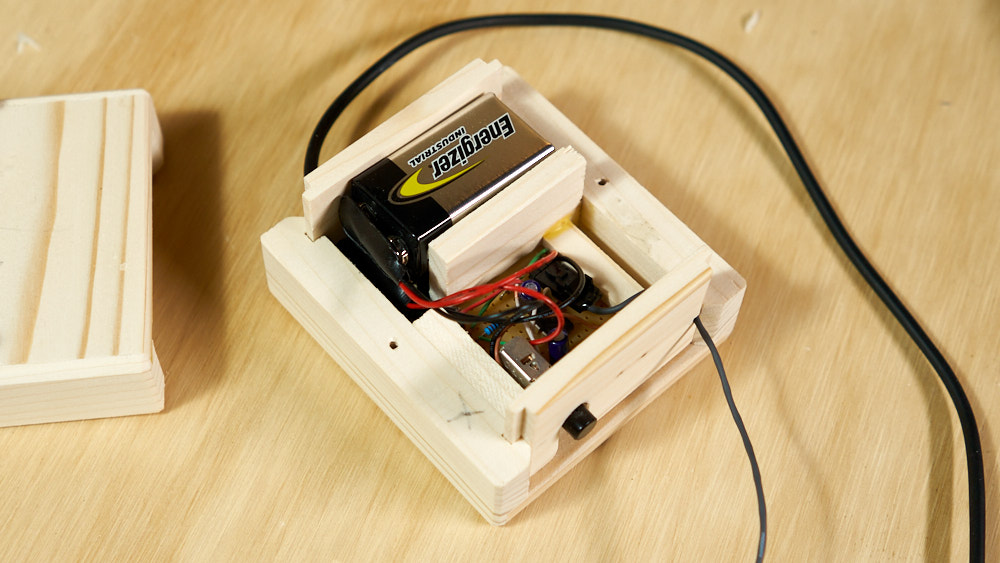 I had to cut a slot into the front panel to fit down over the switch and another notch for the cord that goes to the accelerometer:

Not my finest work, but it’ll do. And it works! That is the main thing.

First test was the single large panel on the wall in my basement. I fastened the accelerometer with blue tac and did the measuring with REW on my laptop:

Later I used thin double sided tape and that worked much better.

To make the sound I hooked up one of my bigger speakers. This has a 15″ woofer and gets down fairly low. I’m using my function generator to run a tone sweep from 20Hz up:

The results of a later test using the double sided tape:

While I’m sure this looks like a lot of nothing to some of you, it shows the frequencies where the panel is vibrating the most. And the most important is the lowest one that’s centered around 40Hz. Because the bass response from my speaker is most likely rolling off below 50HZ, this peak should be higher relative to the ones farther up. Or at least that’s what I’m reading it to be.

To more or less confirm this, I measured two more panels. The first is below the big one and is 24″ x 48″:

Little something around 50Hz, but nothing for 40Hz.

The results are kind of inconclusive. Since this panel is fastened on the right edge to that first big panel, it may be affecting the reading:

But it’s safe to say that something is happening. Whether that’s good or bad remains to be seen. I’ll be working on the wall opposite to this one soon and will be able to use this to test as I go, and get a better idea as to how effective this bass absorbing idea actually is.

I made a video showing how I assembled the preamp, while explaining how the circuit works: