How to Make a Another Wooden Bar Clamp Clamps & Vises

This article was revised and expanded January 25, 2014

This design takes the lessons learned from mistakes made on my previous “red” model, and the result is a much better and more robust clamp.

I’ve had a lot of comments and questions on this project lately and that’s what prompted me to revise this article and make a new, more detailed video for it. There were a lot of complaints on the original video because it was all action, without any narration to explain what’s happening. In the new video I go into a bit more detail and talk about each step in the build process.
Here it is:

To get started, I rounded up some suitable wood for the project and the hardware:

Maple, 2″ wide and 3/4″ thick, threaded rod, a t-nut, a washer and four nuts. A small piece of spruce (or any wood, it doesn’t have to be softwood) is needed to make the handle. Any good, strong hardwood will do for the clamp, but it should be clear of defects and relatively straight-grained.

Next, the wood that will be the bar and fixed jaw of the clamp are planed a bit thinner. This is to give space for the bar to slide inside the moving jaw easily:

Part C is the main component in the moving jaw. It’s 4″ long and has a bevel cut at one end: 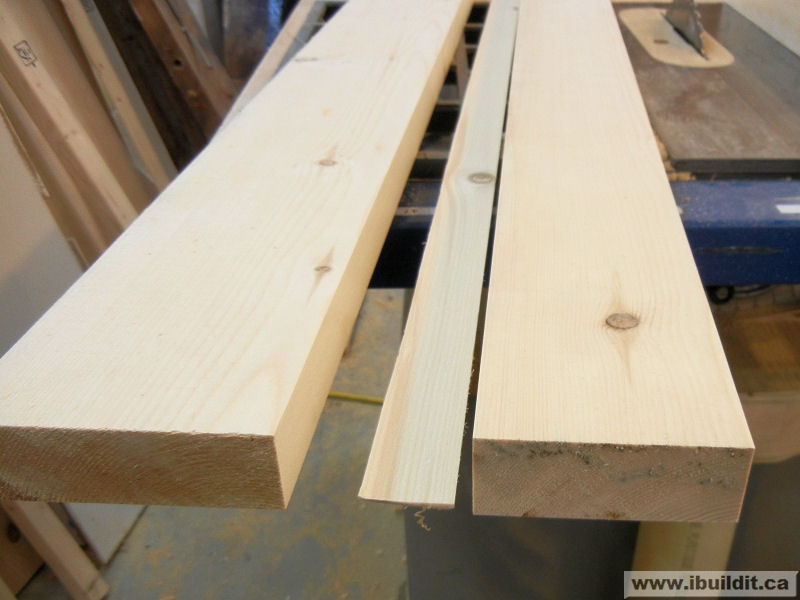 The other major part of the moving jaw is part D:

I cut that out on the band saw.

Holding part D against a flat surface, you can see how the bevel works to clear the cog that will fit in the notches on the bar: 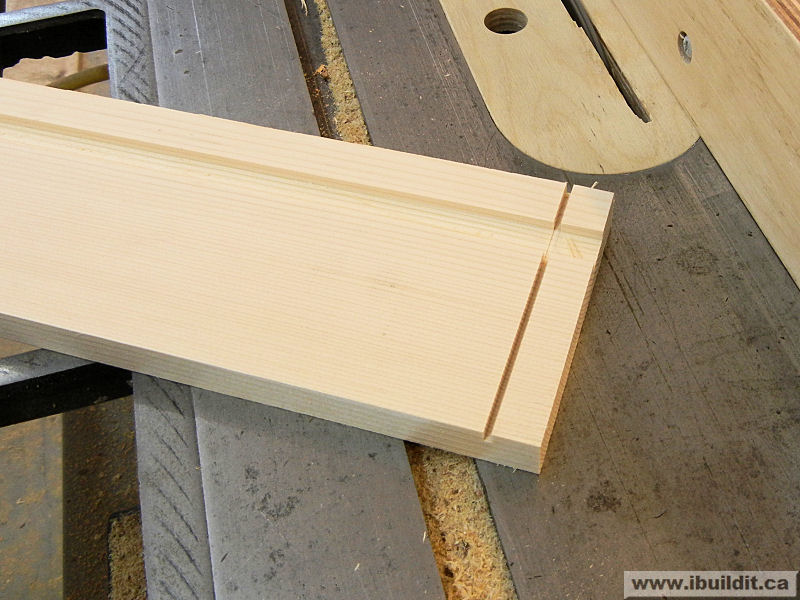 Parts E and F are cut from a smaller piece, and I did that on the table saw using my push stick to hold it firmly:

The part cut out so far in their correct orientation.

To make the outer faces of the fixed and moving jaws, I need to rip a board down to 1/4″ thick pieces. I find the safest way to resaw wider stock on the table saw is to cut halfway, then flip it over and finish the cut:

The bar needs notches evenly spaced along its back edge, and to do that I have my table saw sled set up with a 3/8″ dado blade:

Nothing fancy needed to line up the notches, just pencil marks 1″ apart. The spacing on the notches doesn’t need be exact.

The lead screw for the clamp is 3/8″ threaded rod. Here I’m cutting it from a longer piece:

The first assembly step is to put together the fixed jaw. Parts I are glued on both sides and clamped tightly:

Next, the moving jaw is assembled. Parts G are glued on either side of parts C and D. The photo below shows the correct orientation for these parts: 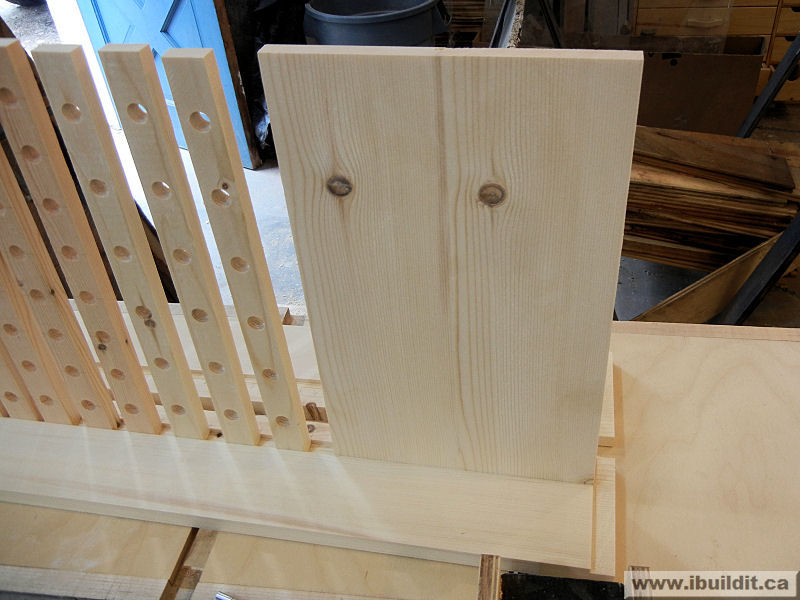 Before clamping the moving jaw to dry, it’s a good idea to check to make sure it fits and slides properly on the bar, and adjust as needed.

The clamp pad is next. I use 3/4″ pin nails to keep the parts from sliding around:

Clamped and set aside to dry. Not that only one of the parts K are put on the clamp pad at this time. The other will be glued on after the clamp is fully assembled.

I gave the subassemblies several hours to dry, then started the next machining operations. Here I’m drilling the 1″ x 1/16″ counterbore for the t-nut:

A 1/2″ hole is then drilled all the way through the moving jaw.

I used the t-nut to mark where the barbs on the t-nut are:

Then drilled 5/32″ holes for them. This stops the wood from splitting when the t-nut is driven in.

These screws are the most effective way to keep the t-nut from coming out.

The lead screw needs two nuts on the end, tightened against each other to stop them from coming loose. A single plastic insert lock nut could also be used, as well as a regular nut with permanent locktite:

Two more nuts are threaded onto the lead screw on the outside of the clamp pad, along with a 3/8″ washer. Again, a locknut or some other means of securing a single nut can be used. I find the double nuts jammed against each other to be the cheapest and most reliable. It’s important to leave some space for the lead screw to rotate freely.

The lead screw is then threaded into the moving jaw:

The clamp is then tested to make sure the moving jaw slides and locks on the bar correctly. It should move easily and when the cog on the moving jaw is engaged in a notch on the bar, the jaw should be 90Â° to the bar.

The handle is glued onto the lead screw with polyurethane construction adhesive:

I let the glue set on the handle for a full twenty four hours before using the clamp.
The final step is to glue on the other part K, and the clamp itself is used to clamp that.

This is the original “no talking” video: