Not another clamp! Yes, another. This time a “C” clamp with a 10″ deep throat, giving it an extra long reach. It can clamp object up to 6″ thick and is fairly strong for a wooden clamp this large. This strength is due, in large part, to a threaded rod “backbone” that keeps the arms of the clamp from spreading.
As usual, I made a video of the build:

The clamp (clamps, actually. I made four) is made from pieces of maple flooring that I rescued from the dumpster on a job site. I ripped the tongue and groove off, to make all of the parts 2″ wide:

I then cut the parts to fit together at the corners with tongue and groove joints: 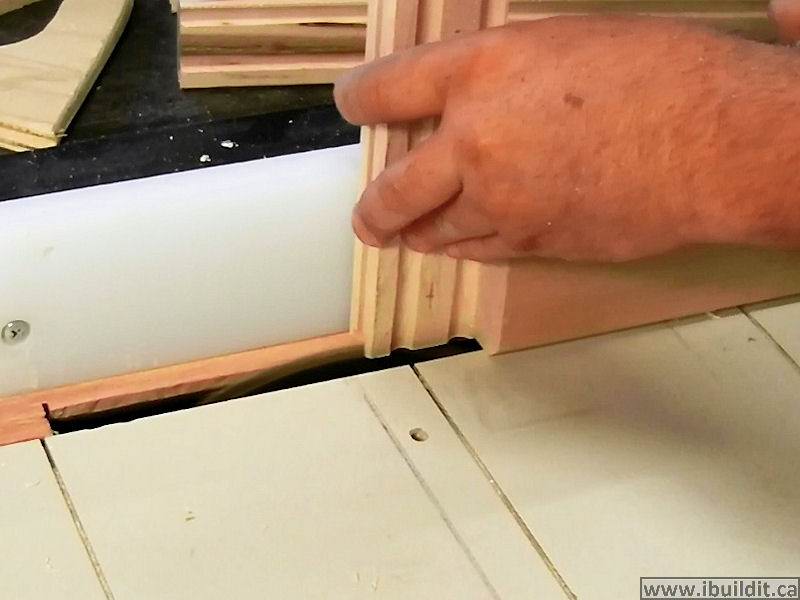 This will help stop the clamp from twisting when it is loaded.

Here I’m clipping off two of the prongs on a t-nut to make it narrow enough to fit on the 3/4″ arm:

I have the four prong variety of t-nut. After it is inserted into the arm, I use screws to hold it in place.

The pad that goes on the end of the clamping screw needs to rotate freely when it contacts the work. To do this I start by drilling a 3/4″ hole, 1/2″ deep in 3/4″ thick plywood:

A holesaw is used to cut the outside of the pad and a piece of 1/4″ plywood that will be the retainer:

The clamping screw needs a nut on the end that will not turn. To do this, I flattened the rod slightly for an interference fit for the nut. For extra insurance, I used epoxy as well:

After the epoxy had set, I put some petroleum jelly on the end of the nut as lube. This nut will rub against a 1/4″ washer that is in the counterbore in the pad. To assemble, the retainer is glued to the pad and clamped:

The frame of the clamp is assembled using polyurethane glue and the 1/4″ threaded rod used as the backbone. This backbone counters the compressive force of the clamp and is very effective.
Notice that the clamping screw is being used to space the arms at the correct distance:

The handle is installed with more polyurethanes glue and the frame pad is glued on:

I added a screw to the handle. This makes the clamp faster to adjust using a driver:

To make them more visible in the shop, I painted them:

Given the name, I thought a nautical colour scheme would be appropriate.

These are not the strongest clamps, but can supply some fairly impressive clamping pressure. I thought it would be fun to see if it could crush an apple. It did it (good view of this in the video, at the end) easily. The arms did deflect outwards under the load but didn’t show any signs of breaking.

Making four at the same time didn’t take much longer that doing one. I’ve already used these clamps for a few things and they are earning their keep! A worthy addition, for sure.