It’s been three years since I installed the t-bar ceiling in my shop. That project brought about three major improvements to my shop:

At the time I did the ceiling, LED bulbs were available for the fixtures I used, but they were much more expensive. Since it was obvious at the time that LED lighting would be the future, I decided I could always switch over when the prices eventually come down. I also thought that if I did switch, I’d want a solution that didn’t use the existing ballast in the fixtures. Those ballasts burn out over time and are costly to replace.

In a recent blog post I talked about building a new shop, and after the video that went with that post came out, I got an email from Jim Uno at American Green Lights asking if I would be interested in their products for the new shop. I said absolutely, but the new shop is not a sure thing and even if it was, it would be at least a year down the road. I went on to say that I would be open to upgrading the lighting in my current shop and we discussed options. Basically to reuse the troffer fixtures that I already have with refit LED strips and new power supplies.

While waiting for the products to come, I had another idea: instead of installing the LED strips in the old fixtures, I would make new, smaller ones that would hold a single LED strip:

These look like regular LED tape that you can buy online, but they are in fact much better. The quality and consistency of the light, plus the metal reflector they are attached to make these far superior. They are 24 watts each, and the colour temperature of the ones I have is 5000K. What is just as important is the high CRI (colour rendering index), which is 95. They came with 48 watt power supplies and one will drive two LED strips.

I made a “prototype” to try out the idea:

A slim, neat package that looks like it is a manufactured product.

And with it installed in the ceiling and temporarily connected, I could judge the light output:

These are impressively bright. Each strip is rated at 24 watts and is roughly equivalent to two of the old 32 watt fluorescent bulbs. So there would be considerable energy consumption savings, as well.

Now on to details about how I built the new fixtures. I started with a 3-5/8″ wide steel stud from my local building supply that I cut in two pieces. The steel stud makes the body of the fixture and has a convenient lip on the edges of the open side to support the lens diffuser. The only tricky part was making the end caps, and I used aluminum roof flashing for that:

This is white on one side and dark brown on the other, and is thin enough to cut with ordinary scissors. There were a LOT of these to make, so I decided to get that tedious job finished before moving on to assembly:

I cut a block of wood to the right size to act as a bending form:

Then slipped that onto the end of the stud:

I used two self drilling sheet metal screws to fasten it on the back:

At the other end where the wire comes out, I added a strap to secure the wire:

These were new, longer wires that I soldered directly to the LED strip after removing the old lead. I show that in the video at the bottom of this page.

After I had the prototype installed, I had another idea: to make the ends rounded, to resemble the kind of lighting you see in the star wars movies. Bump up the cool factor, in other words. So I made a half circle pattern from wood and used that to mark out the first end cap blank:

I cut that one out and used it to mark the rest of the blanks:

More tedium! But I think the end result was worth it – the effect does look more interesting than the square ended one:

And installed in the ceiling: 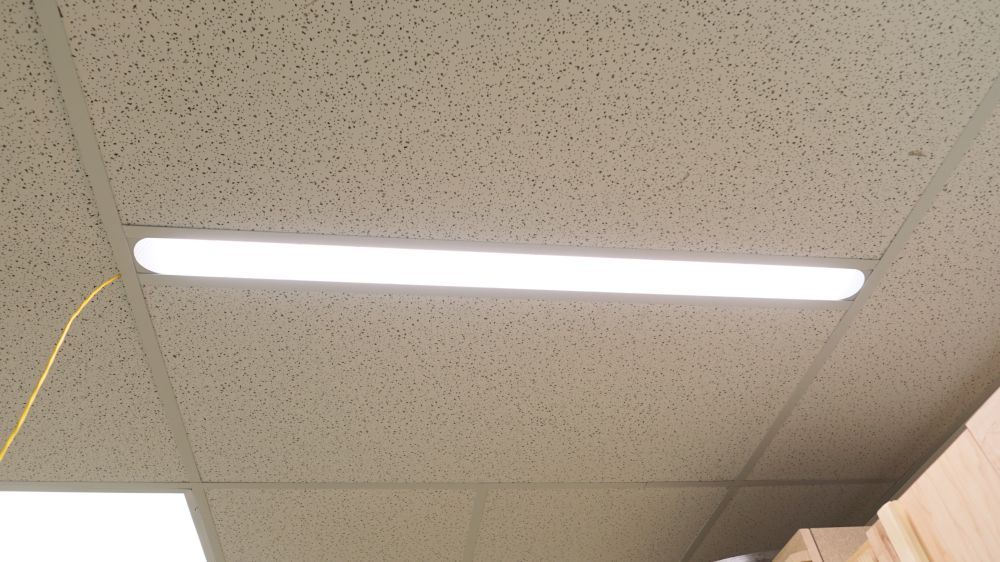 So, with that settled on, I started in on mass production of the next fifteen fixtures, starting with the steel studs. The overall length of the stud id 96″, but the body of the fixture needs to be less than half that – 47-11/16″. This makes it the right length with the end caps to fit in the t-bar ceiling grid:

I made the cuts with my angle grinder equipped with a thin cutoff blade, and deburred the edges with a file.

I also cut out the lenses for the fixtures from 2′ x 4′ panels, and needed extra tiles and cross tees to complete the job:

I worked up a layout in SketchUp to go by, but did end up making a couple of changes: 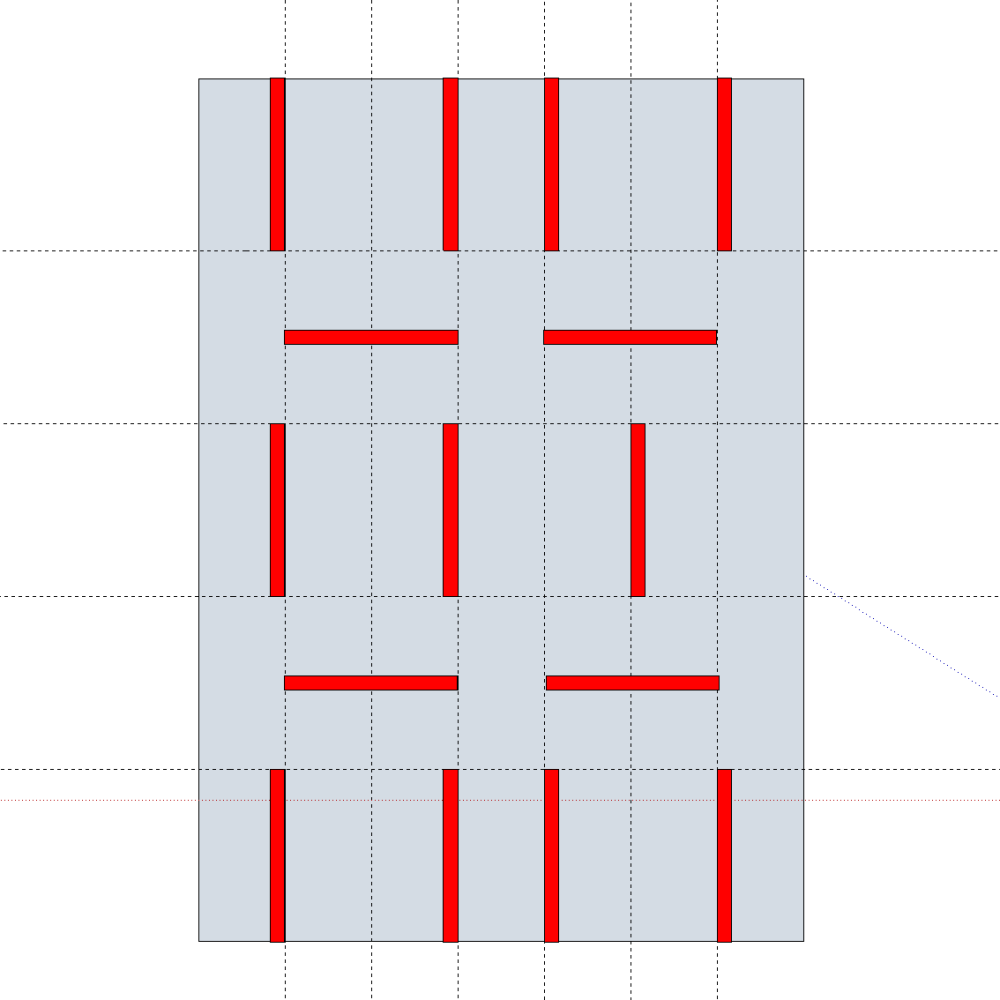 The small size of these fixtures make placing them easier. The idea was to use more that are spread out, rather than concentrate them in patches like the old lights.

After getting half of the ceiling done, I experimented with up-lighting on top of my tool board cubbies, but didn’t like the effect:

It might look better if the output was dimmed, but these strips fully driven are too bright for effective up-lighting. I did use this for temporary lighting while the main lights were off.

One issue I had, and I’m glad I caught it early, was that the lens needs to be cut shorter to allow for expansion. Here you can see how it wrinkled when the LED heated up: 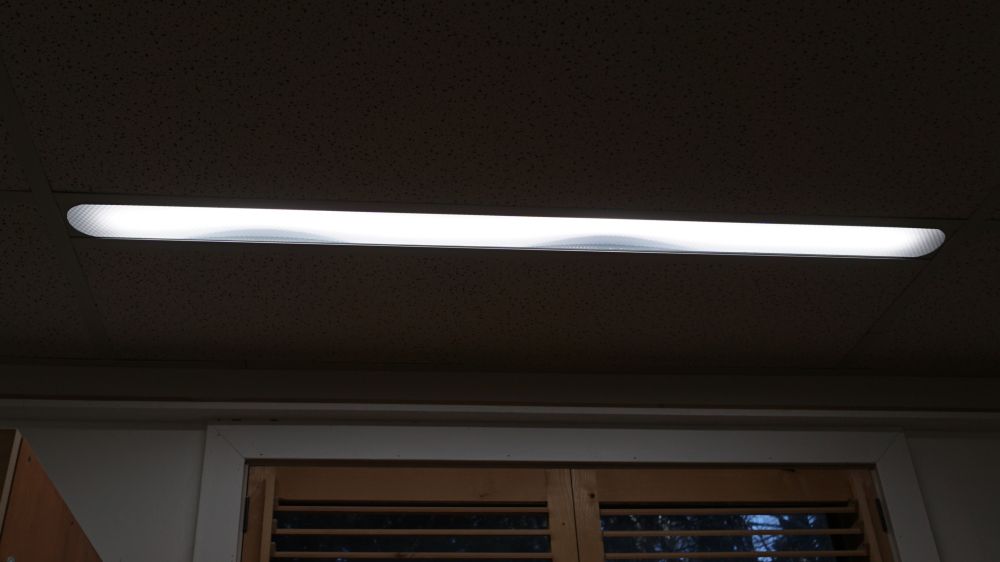 I cut 1/4″ of the end of each lens and that solved the problem.

These strips are powered by DC supplies, and I installed those in a covered (cover removed in this photo) metal electrical box: 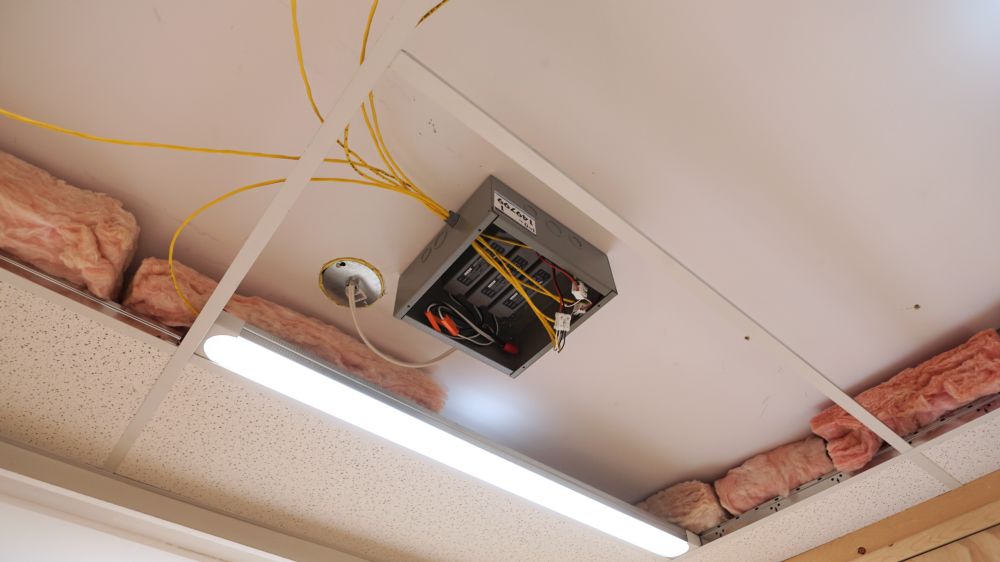 There are three of these boxes, one on each end of the shop and one in the middle. I thought this semi-central layout of the power supplies was best, given the number of individual fixtures in the ceiling.

With all of the 4′ ones installed, I decided to make three more 2′ ones for the back end of the shop to brighten things up there. That has always been an area that was dim and now I had a chance to fix it.
I didn’t have any cross tees to use (and didn’t feel like going and getting any), so I improvised and made my own:

This is cut from a scrap piece of cellular PVC that I had in my shed.

Installed on the fixture: 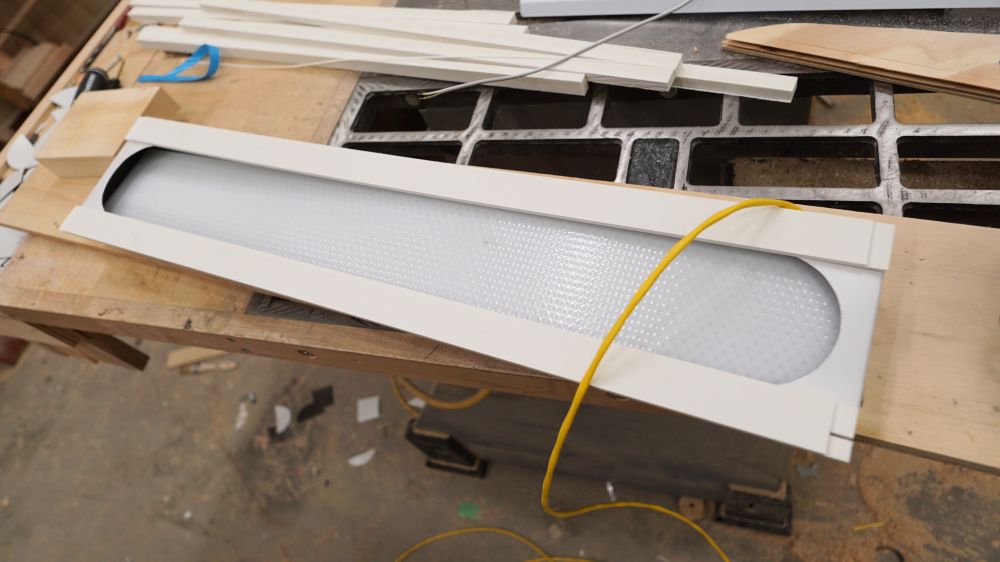 And mounted in the ceiling:

And with that, it was done.

A big job, but so worth the effort. As I said at the beginning of this article, the light output from these is remarkably better than the fluorescent fixtures. Overall, I have about the same amount of light, but is is much more evenly spread. And getting rid of those concentrated hot spots of light will be very helpful when filming.

The colour temperature of the LED’s is 5000K, which is a good choice for a shop and especially one that has windows that let in natural light. Unlike the fluorescent bulbs, the LED’s put out consistent colour across the spectrum, making everything look more natural.

With the old fixtures, my skin would look much redder, especially with the camera focused in close. And the white walls in the background would have a bluish tinge, even with the white balance set correctly in the camera:

Compare that to the new LED lighting:

Since I was so used to seeing my shop under the old fluorescent light, it was somewhat shocking to see the difference in the way everything looked with the new lights.

Even things that really don’t matter much look better with this lighting. This shot showing the porch railing on my house and snow on the ground through the window in my door, for example:

With the old lighting, everything would look blue – purple, because the camera white balance would have to be shifted to compensate for the lack of it in the fluorescent light spectrum:

Along with the improvement to the way things look, there is also another major benefit – these lights come up to full brightness immediately. I would have to wait as long as 15-20 minutes for the old ones to reach full output when the shop is cold, and be forced to leave them on all day (even during the summer) as I went back and forth to the shop while filming a project. As you can imagine, that will be a significant saving on my electric bill over the course of a year.

Speaking of cost, these consume less than half the power as the old ones – 370 watts as opposed to 770 watts. And they should last much longer. In the three years since installing the old ones, I’ve already had to replace one ballast.

Here’s a video I made showing details on the project from start to finish: