When I built my router table, I had a shop that was nearly twice as big as the one I’m in now, so there was plenty of space for it. Since moving into the new shop, I find that I’m always shifting the router table to do some other operation, and when I do use it, I need to clean the junk that gets piled on it. After watching Jay Bates wall hanging router table, I decided that the best thing is to do something similar, and take my old router table out of the shop.

Click here for details on installing the router and lift in the table saw extension wing.

Before taking the router table out of my shop, I would have to address another issue – bit storage. My router table design conveniently has this in the ends, behind doors:

This arrangement has proven itself over the two years I’ve had the table, and the individual rows of bits spaced apart gives it flexibility for efficiently organizing and assembling it.

Recently, I added wheels to one set of the legs on the router table to make it easier to move, but in order to do that the top has to be free of junk that will fall off as I tip the table up onto the wheels. With the table gone, I can use this space more effectively: 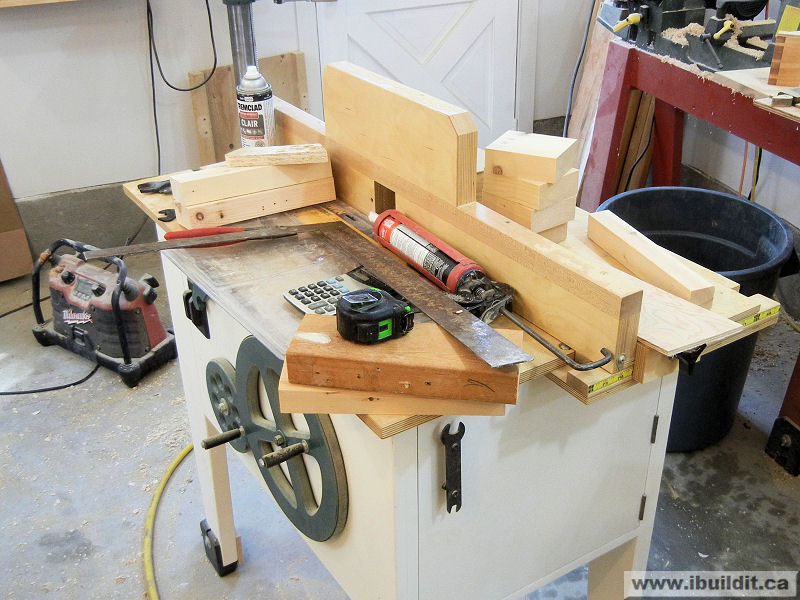 Don’t get the wrong idea – I’ll bring this router table back when I have a bigger shop to put it in (either from expanding the current one, or building a new one). In the meantime, I’ll use it in the basement of my house for the ongoing work that’s being done in there. It will join the utility table saw and folding miter stand, already in attendance.

I didn’t have much of a plan before starting, just a rough idea how I wanted the cabinet to be. One requirement was that it would mount on the wall beside my dado rack, so it would be practical to make it the same height.
Something else was that I wanted to get the whole thing from a single piece of 2×8 lumber, 60 inches long. The latest thing is for guys to make projects from pallets, and while that’s certainly a valid approach, I learned long ago that harvesting usable wood from a used pallet can be more work than building something from it. I think my time is better spent doing other things, while waiting for low cost framing lumber to dry out as an economical source for project material. No nails to pull (or ruin a new blade if cut through), no grit to foul the planer knives and no stains that an hours worth of sanding won’t remove.
Here’s the piece. Well seasoned and fairly clear:

The depth of the cabinet will be 4″; and I ripped the first piece to that width, removing the rounded edge.

I then cut the parts for the sides, top and bottom from it by resawing the thicker stock:

I used the table saw as opposed to the band saw for a smoother cut, to reduce the amount of sanding I would have to do. I could have run the parts through the thickness planer, but made that tool off limits for this project. 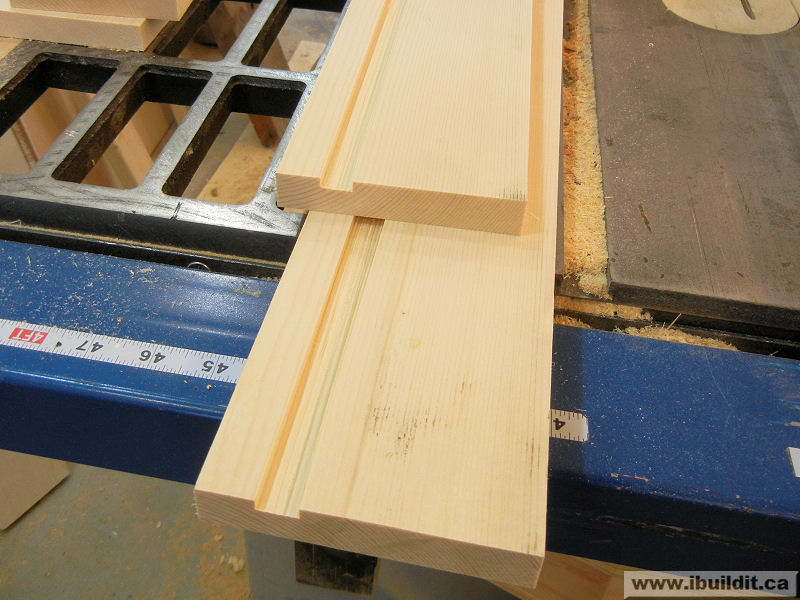 Next, a 1/2″; x 1/4″; deep dado was cut 3/4″; from the back edge on each side piece. These will receive the slats that will hold the bits, and a solid section at the bottom of the cabinet to mount the wrenches.

The sides are jointed to the top and bottom with rabbet joints, and here I’ve made the shoulder cut on the table saw:

A cheek cut completes the rabbet. This is repeated on each end of both side panels.

Cut to length to fit into the dados on each side panel.

It took some figuring to layout the hole locations on each slat. I did this based on the bits I have and use, plus any others that I might get in the future. Better to have too much storage space than not enough.
1/2″; holes are drilled for the 1/2″; shank bits:

The edges of each hole are slightly chamfered using a countersink. This will guide the bits in, making them easier to insert.

More tricky layout for the slat spacing. Again, it’s based on the bits I have:

Next, two pieces are resawn to 1/2″; thick to make up the solid panel at the bottom for the wrenches. I’ve placed the tools to get an idea of how large the panel should be: 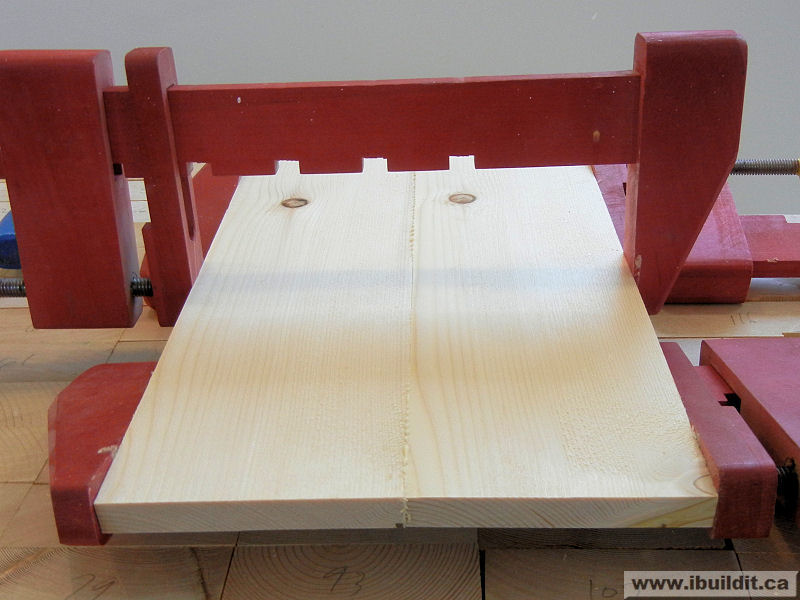 Satisfied with the width, I can glue up the two parts into one panel.

Time for assembly. The bottom panel only gets glued in one spot, near the bottom. This allows for expansion / contraction of the wood panel:

Each slat is glued in, plus a pin is driven from the back to hold them in place while the glue dries.

All of the slats installed on one side.
The entire back of this cabinet could be made from a single piece of 1/2″; plywood, with the holes for the bits drilled through it. I chose to do it this way since it uses the material I had and I like the look of the slats
Another option is to widen the slats to hold two (or more) rows of bits, reducing the total number that have to be glued in.

It took some doing, but I got all of the slats into the dado on the other side panel and lined up:

Before the glue sets on the slats and bottom panel, I need to get the bottom and top of the cabinet glued in.

I then set this aside to dry.

Originally, I was going to leave the front of the cabinet open, like the dado rack. As I was ‘on a roll’ with everything going smoothly and enjoying the work I was doing, I decided to make a door for it instead. I also thought it would be nice to have glass in the door, to show off the contents.
I went out looking for the old windows that were replaced in my basement, which up until recently were buried under the nearly four feet of snow that was in my back yard. Two of the three panes of glass were still intact in both sashes, so that gave me two pieces extra as replacements if I broke the first two while taking them out, or cutting them:

The glass is thin and the putty had gone rock hard, but most of it was easy to remove. There were only four glazing points holding the panes in, and these were quickly levered out with a chisel:

I did break one piece, but managed to get another two out without incident. I scraped off the old paint and putty, but didn’t go any further with the cleaning, since they would also have to be cut to length.

I’ve cut quite a lot of glass, but still feel it’s a gamble, with what seems like the probability of breakage somewhere around the 50% mark. Luckily, it went well:

I managed to get both pieces cut without a problem.

It may seem backward, but I like to build the door to fit the glass, rather than cut the glass to fit the door. Part of that reasoning is that it’s easy to trim a 1/16″; off a piece of wood, but pretty darn difficult to do with glass.
More of that same piece of 2×8, cut to the lengths I’d need to make the door. The scrap of wood has the on-the-fly plan and some important measurements:

The parts are then milled with a rabbet to receive the glass.

The ends of the rails and muntin are rabbeted to fit the stiles:

The whole thing is glued and clamped – no nails or screws.

While the glue dries on the door, I cut a recess on the top and bottom of the cabinet for a spline to reinforce the joint:

The spline is glued and clamped in place.
Too late, I realized that this would have been a perfect place to use my dovetail spline jig to reinforce the corners. Next time.

When the glued was dry on the door, I did the same with it – cut a slot on each end for a spline:

Next, the glass is set in: 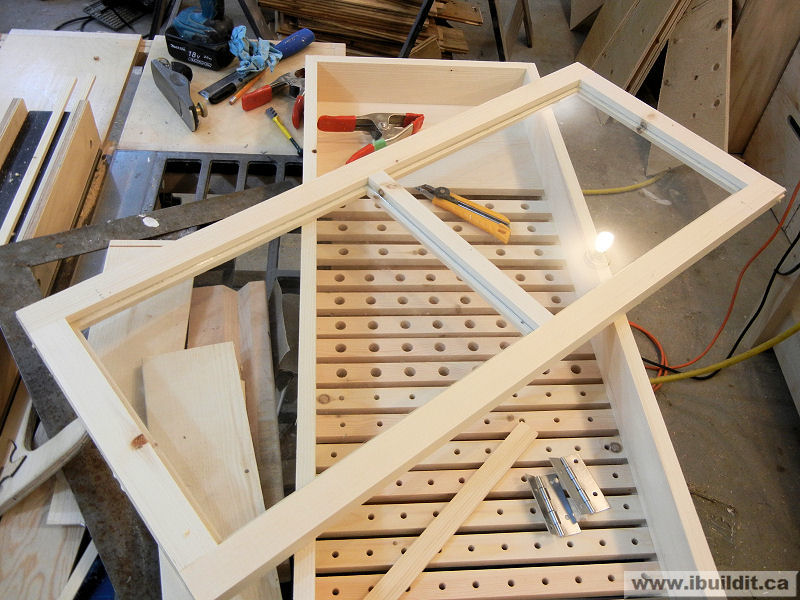 And thin strips are cut to hold the panes in. The strips are held in place with 23 gauge pin nails only, no glue. If a piece of glass ever breaks, replacing it will be easy.

To hang the door, I have these low cost hinges:

The trouble with these is how open the leaves are. To fix that, I crushed them in my vise.

They also come with holes that are not countersunk for the heads of the screws. A 9/32″; drill bit solves this.

A bit of a dying art is the hand-cut hinge mortise, with so many of us reaching for a router to do that. Here’s how it’s done:

I cut the mortise in the cabinet double depth for both leaves of the hinge:

The closed hinge is just proud of the surface and will be screwed to the back of the door without a mortise. This method is easier to do and provides the correct gap between the door and the face of the cabinet.

The door is hung on the cabinet to check the fit:

It closes evenly on the cabinet, flush with the edges.

With the cabinet sanded, here’s how that spline looks:

I have three routers, not including the one in my router table, and these are the wrenches needed for those:

I figured the best way to mount the wrenches was to make small wooden brackets and glue them to the back panel.

The cabinet in place, screwed to the dado rack on the side and through to a stud in the wall at the back:

And a simple wooden pull is glued on. Again, cut from the 2×8:

A look at the wrench arrangement. The bottom is a good place to keep the assorted bearings, allen keys and collets.

Not bad from roughly $4 worth of lumber, some recycled glass and half a days work. Granted, it was one of my diamond days, but still a project well worth doing even if it takes a week.