This is another one of those projects I’ve wanted to do for a while. It’s not because this is an essential tool, it will be used, but it’s not something I couldn’t do without. No, it’s more about just wanting to build it – projects like this, a neat little marriage of wood and metal work, really appeal to me.

The plane was designed to chamfer a corner to an exact width of 1/8″. The infeed is adjustable via the two set screws and cross-clamp making very precise setup and tuning possible. Unlike many other chamfer planes, this one can take thin slices at each pass
for a very smooth finish.

January 2015 Update – I re-edited the original two longer videos down to one shorter one and added some narration:

The sides and wedge are made from maple and the core is black walnut. The sole inserts are stainless steel, as is the cross bolt. The pin is the shank of a drill bit cut to length and glued in:

The blade is hardened steel, made from a piece cut off of a 7-1/4″ circular saw blade. The blade was hardened using a torch, then quenched in oil and left at that hardness, without tempering. To this day, the blade still has a razors edge and has not been resharpened.

The cross-clamp not only looks cool, but serves a vital role: it locks the adjustable sole insert in place by clamping the sides of the plane together. The cross bolt is loosened, the set set screws are turned to adjust the sole insert up or down, and the cross bolt is tightened again. I made a special wrench to do that: 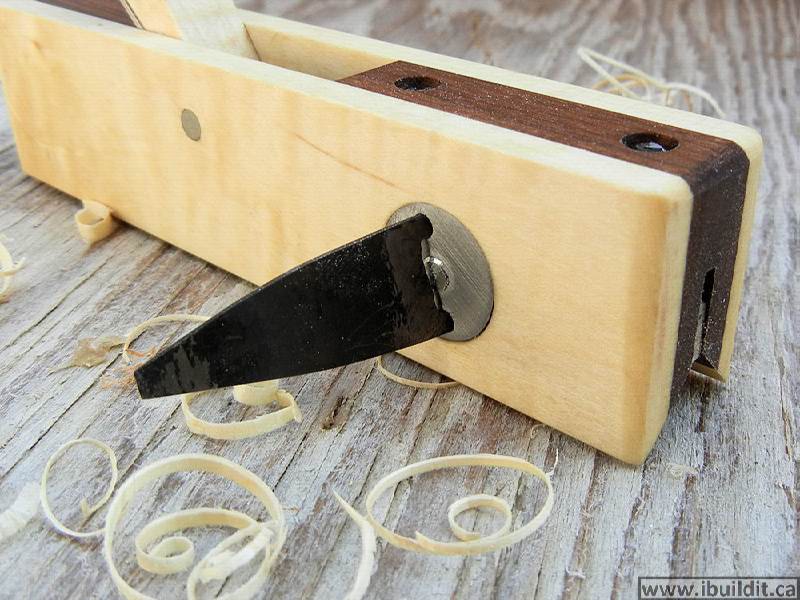 The wrench was also cut from the saw blade and hardened. It have a dual purpose: the other end is used to turn the set screws that adjust the infeed.

A moderately challenging project and a very satisfying result. I like how it looks so much, I’m reluctant to use it, for fear of damaging it!

I’ll probably get over that, though.

January 2015 note: I did get over it and have used this plane dozens of times over the last two and a half years. It have proven it’s value in that time over and over, and will continue to do so well into the future. A project that was well worth the time and effort.