“You can never have too many clamps” – so true. Often, we only need two or three at a time, but occasionally there is that big glue-up that requires at least four more than you have. Good news is that you can get some pretty decent clamps at a good price – great if you are buying one or two. Unfortunately, even reasonably priced clamps can still be a hefty financial burden, if you need a large number of them. For this reason, I decided to make some of my own.

I already have quite a few clamps: pipe clamps, c-clamps, spring clamps and six (at last count) bar clamps. Of these four types, the ones that get the most use are the bar clamps. Bar clamps are fast and don’t give up much clamping pressure (in comparison to c-clamps) in exchange for their ease of adjustability.

So, when I decided to make clamps, I chose the use the bar clamp as the model.

These work very well, as demonstrated in this video:

One thing that makes them less convenient to use is that there is a lot of space between the notches, making for a lot of cranking of the handle to close the jaws together. My reason for making the notches this far apart was to try and prevent this wood from breaking off under clamping pressure – by reducing the distance to half, I would be making the clamp more fragile.

Another ‘problem’ is that when clamping wide pieces, the bar would bend under the load. Of course all bar clamps bend while in use, but these can bend quite a significant amount, making it seem that they may break. The bar is made from maple, 1/2″ thick and 1-1/2″ wide – so not really undersized, but the notches effectively reduce this width by a full 1/4″. Making the bar wider would help but also make the whole assembly more bulky and necessitate the use of stock that was not deemed as ‘scraps’. Using up scraps counter balances the time spent building them, making for a really economical project.

So, I gave it some thought (well, a lot of thought actually) and came up with a better method, one that addresses both of the issues touched on above:

Also, the threaded rod was pre-stressed (tightened, via the nut at the end of the bar) after it was
put in. This pre-stress counters the compressive force of clamping, preventing the bar from bending back. Although I knew this would be somewhat effective, I was pleasantly surprised to see just how well it works – under quite a lot of clamping force, the bar deflection was minimal.

The piece of wood being clamped is 17″ long, and I’ve put more force on it than I’d normally use during a glue up. There is so much force, the clamp is actually twisting slightly, as seen in the picture above.
This success more than makes up for the extra cost of the threaded rod. As for build complexity, this version and the earlier one are about the same.

Once it was complete, I did a video going over some of the details and showing it in action:

The wooden bar for this clamp is made from white oak, left over from some flooring. Whenever possible, I like to use what I have on hand, rather than buy something. For this, any hardwood would work fine.
The bar is 1/2″ thick, 1-3/4″ wide and has a slot along the front edge; this slot is for the threaded rod and is 1/4″ wide, 1/8″ deep. The end of the bar is rounded and has a hole drilled into it to receive the hooked end of the threaded rod. I bent the rod cold, around a 3/4″ socket that was screwed to a piece of wood. The outside diameter of the socket is 1″ – perfect for the ‘candy cane’ shape I needed on the rod.

The fixed jaw is made from two pieces That are dadoed out to fit tightly around the bar. There is an additional notch, to allow the threaded rod to pass through:

You need clamps to build clamps! Here I’m gluing the fixed jaw. One end is clamped in my workbench vise:

After the glue had dried, I shaped the fixed jaw, sanded it smooth and got ready to glue in the threaded rod. I’m using PL Premium to glue in the rod, which has very good adhesion to steel.

A homemade clamp to hold it in place:

And before the glue sets, some tension on the rod. This tension goes a long way toward keeping the bar straight by countering the tension from the clamping action.

This is what locks the moving jaw in place during clamping, by meshing with the rod on the bar. It may look insubstantial but it seems to get the job done quite well.

In my previous version, I used two nuts on either side of the jaw that were glued in. On this one, I’m using a single t-nut: 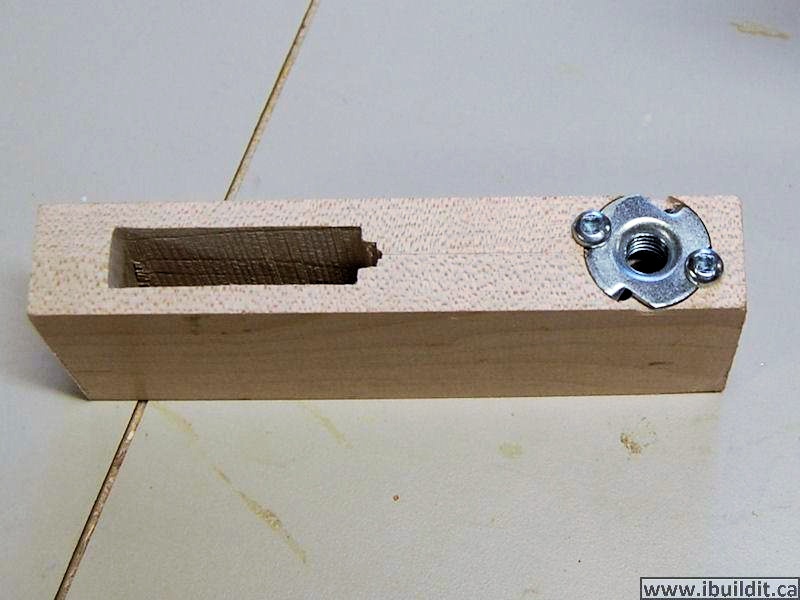 The four holes are for the spikes on the t-nut – trying to drive this into the jaw would be asking for trouble. Better to take some extra time to drill out the holes. After the t-nut is put in, two screws keep it from coming out.

For the drive screw, I use 3/8″ threaded rod, and it needs a nut on the end to push against the pad.
Here I’ve drilled a hole though the nut and into the rod, to drive a #6 screw to hold the nut on:

The end of the rod with the nut fits in a 3/4″ counter bore:

The washer stops the nut from wearing out the inside of the pad. Before I assembled it, I put a dab of Vaseline on the end of the nut, for lubrication. The slotted piece of wood gets glued on and traps the nut inside the pad.

Getting started on the handle, drilled about 1″ deep with a 3/8″ bit.:

The handle is shaped, glued and pinned to the drive screw. A 1/16″ hole was drilled though the handle and through the threaded rod. A 1″ finish nail is then driven in a cut off flush. The nail is there in case the glue holding the handle on fails, even though that is unlikely to happen.

An interesting project, it’s always more fulfilling when you get to improve upon an earlier design and bring it to fruition. The two major shortcomings of the previous version were addressed, making for a much better clamp.
I’ll need to build some more, perhaps even some larger ones, using 3/8″ threaded rod; longer, for wider tasks, such as table tops.