New Base For My Trim Router Homemade Machines & Jigs

One of the things I don’t have a problem doing is modifying a tool to fit a pressing need, and such is the case for my trim router. I needed to route a recess in a very tight space and to make the tool fit, I cut the base smaller:

Sounds extreme, but that’s just how it goes when I need to get something done. Looking at the base, you can see the remnants of the polyurethane construction adhesive I used to glue on a new plywood base at some time after making the cut, so this is history repeating itself. I’m not sure why I removed that plywood base, but I’m sure I had a good reason. Possibly to fit into another tight space.

I’ve had this particular router for around 15 years and have used it for a great number of things without the stock base installed. I even went so far as to make a plunge base for it, back in 2008: 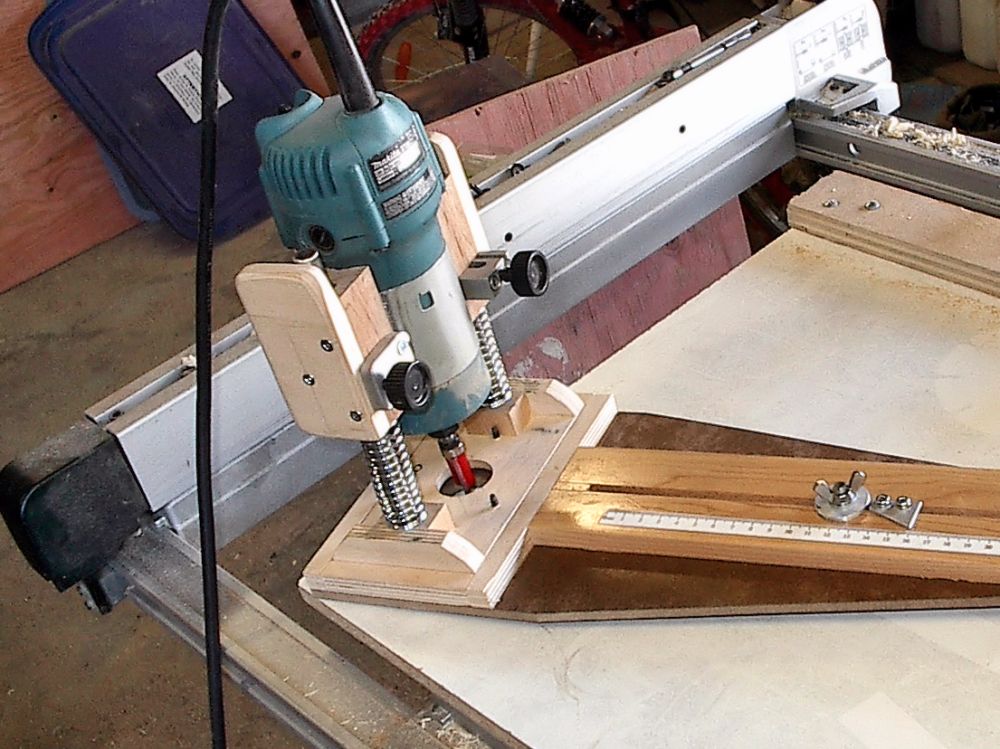 Seen here with a neat circle cutting jig (note the metric scale…). Even though this worked well, it was a bit finicky to use and at some point I took it off and it became a casualty of an epic shop cleanup. I briefly considered doing this again, but it would be more for the novelty of the project than for its practicality.

Instead, I figured the very best base for this would be made to accept the template bushings that I have for my bigger router, so that I could use it for things like routing out hinge mortises with a simple jig. 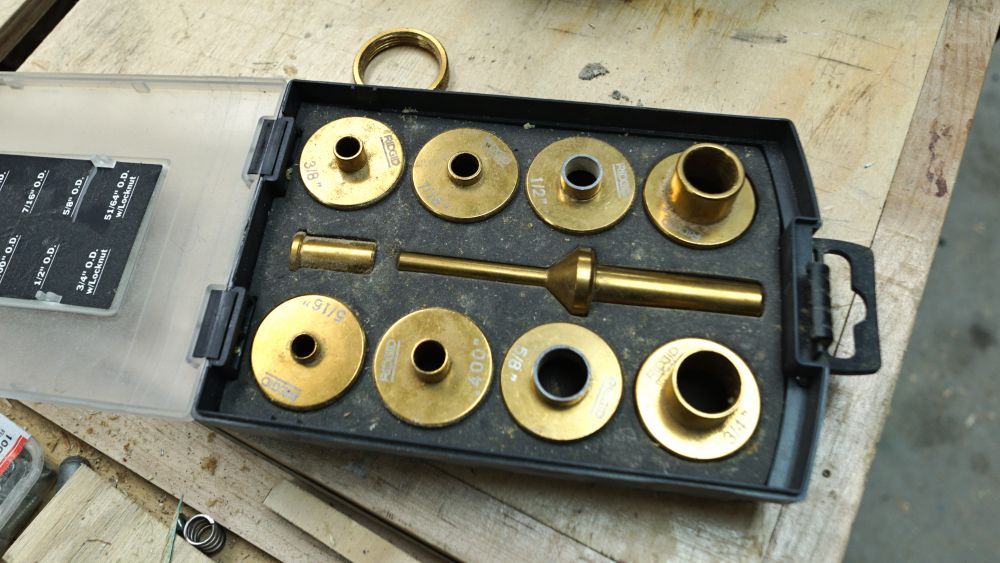 The bushing set is all metal – brass coloured, but that’s just a plating on the steel they are actually made from. Traditionally, the best of these are made from brass, as it will not (badly) damage a router bit if you accidentally cut into it. Also, brass threading is “stickier” that steel, so a real brass bushing would be less likely to unscrew with the vibrations from the machine.

I figured I’d make the base itself from 1/2″ Baltic birch plywood and found a small piece in my scrap wood cabinet. After getting this base done, I realized that a better material would be a solid plastic, like a thin cutting board or a piece of 1/4″ thick acrylic. And, as it happens, I had both but it didn’t occur to me until it was too late.
Anyway, I cut the base into a 5″ square then marked diagonals to locate the centre. I drilled a counter bore on both sides that is the same as the lip on the bushings and then a hole all the way through. That hole was slightly smaller than the threading on the bushing, since I didn’t have a bit that size. I then reamed it out big enough on my spindle sander for the bushing to fit:

Sounds pretty good and looks good, right? The bushing is a perfect fit, at least on the “business” side:

But not on the threaded ring side. My counterbore wasn’t big enough:

So I put a bit in the trim router and routed it out a bit bigger freehand. The ring then fit, but just barely and I knew I may have problems gripping it to undo it:

And routed it again for a much better fit: 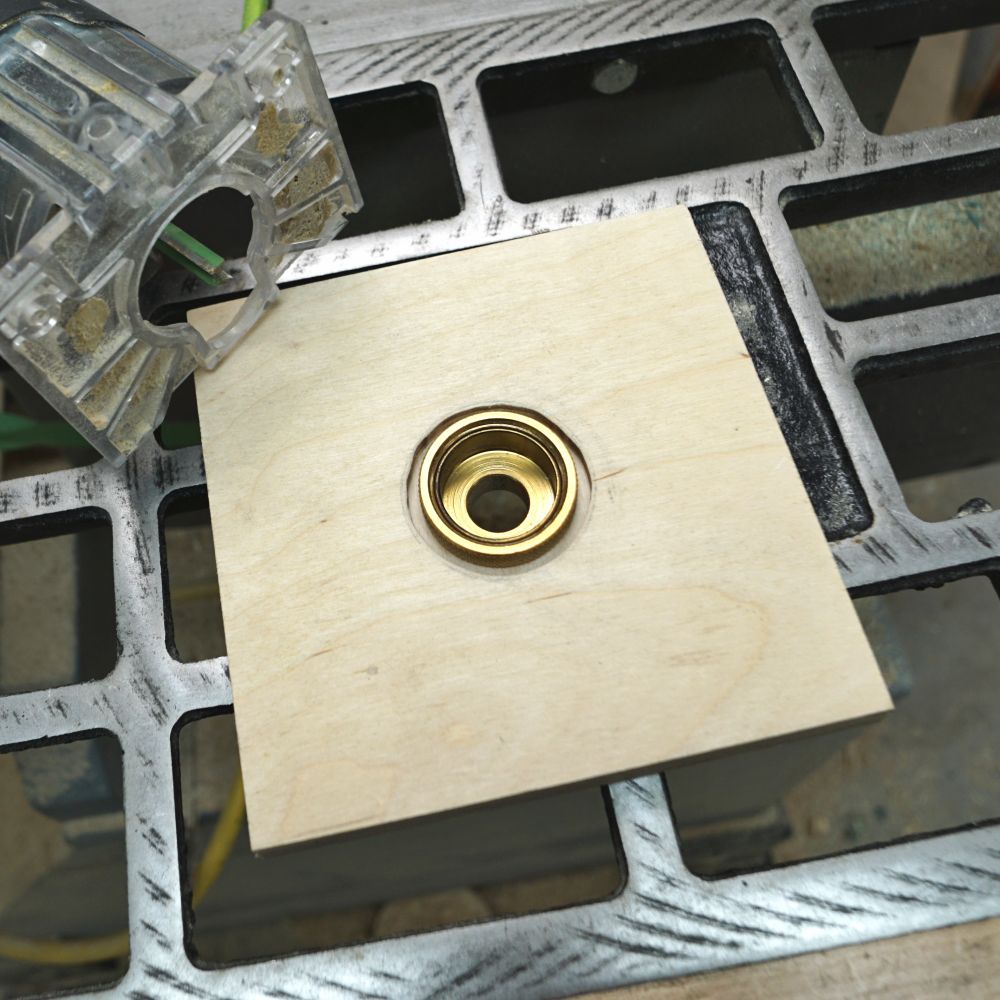 Lots of clearance to grip it now!

Next step was to fasten this new base to the stock plastic one and I figured I’d use epoxy to do that, since I have no intention of ever removing this base (yeah, right!). I used fast set epoxy and left it to cure for about 30 minutes: 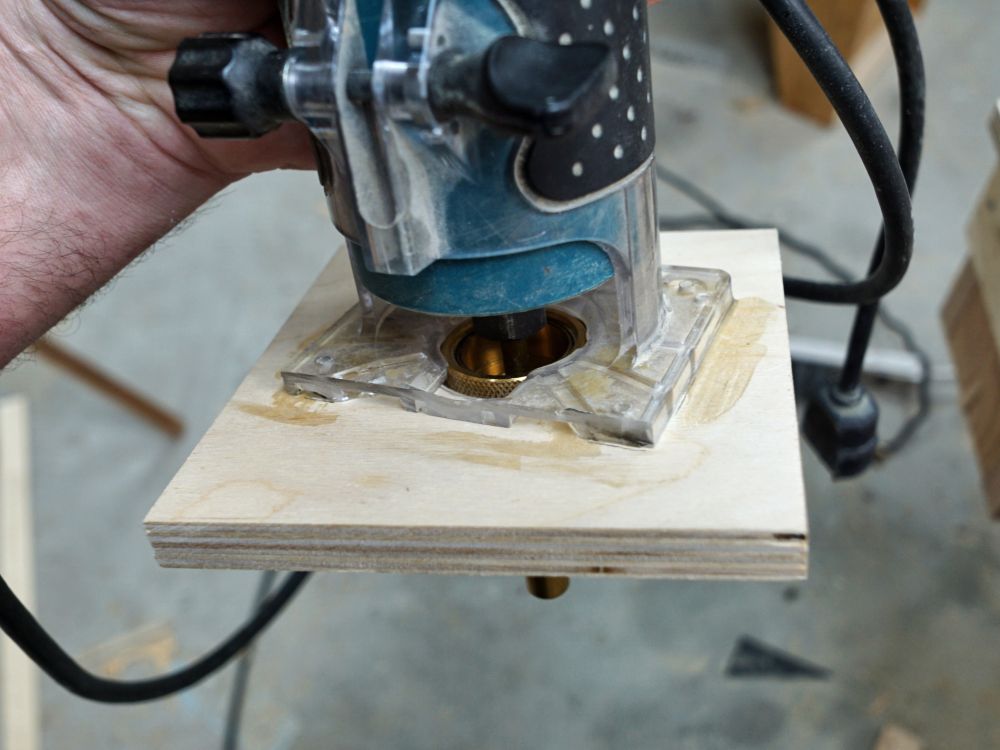 I used the special pin that came with the bushing set to centre the plywood base on the router while the glue set. I could then drill and tape for #10 screws that are set below the surface, and these will be the permanent means of attaching the base:

And while doing this I realized I’d made yet another mistake – the ring that holds the bushing in place is now trapped:

So much for me routing a nice clearance recess for gripping that ring! I didn’t (absolutely didn’t!) want to take the base off again to get the ring out and resize the hole in the plastic base, so I used a drill bit to “route” out around the ring enough to get it out (slightly damaged, but who isn’t these days?), and then chucked a router bit in my drill to widen out the hole even more. There’s a brief shot of me doing that in the video below.

After that, the ring would fit, even if it was a bit difficult to grip. I can always turn the bushing into the ring and tighten it with pliers: 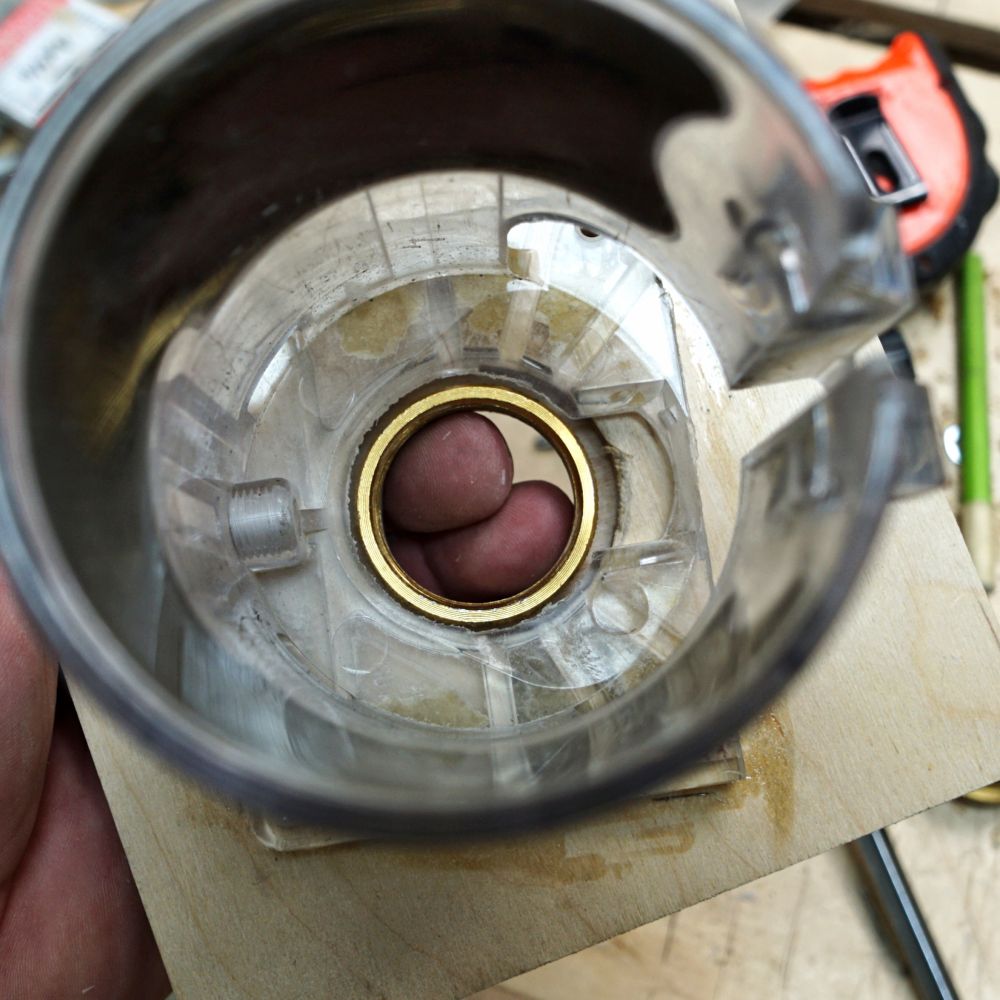 I could also drill a small hole in each of the bushings and used a small allen key to tighten or loosen it, very much like the nut on an angle grinder. Nah, the pliers are faster.

Last step in the process was to make the base perfectly round and I did that on my belt / disk sander. I drilled a 5/8″ hole in a scrap of plywood that the bushing would fit into as a pivot point:

And the sanded it it until it was exactly round and concentric with the bushing:

Got some nasty tear-out on the base from rough cutting it on the wrong tool – the band saw instead of the jigsaw, but that only affects how it looks and the perception of competence on the builders part.

The finished base with the 5/8″ bushing installed and a 1/2″ bit for mortising in some hinges in my house:

As for the sequence of how I did this, that changed over the course of the project. First I was going to attach the plywood blank to the plastic base with just screws, and then “drill” a small hole through with a 1/8″ router bit. Just loosen the collar enough for the base to slip up to drill the hole. Then I could remove the plywood and use that small hole to drill the larger counter bores, as I did above. In hindsight, this may have been a better method, since it doesn’t rely on the new base being glued to the plastic base, making it easier to fix the other problems that cropped up along the way.
But it all works out well in the end and I’m very happy with the new base. I’ve had the opportunity to use it a few times and it works perfectly.

I made a video showing how I made the base: